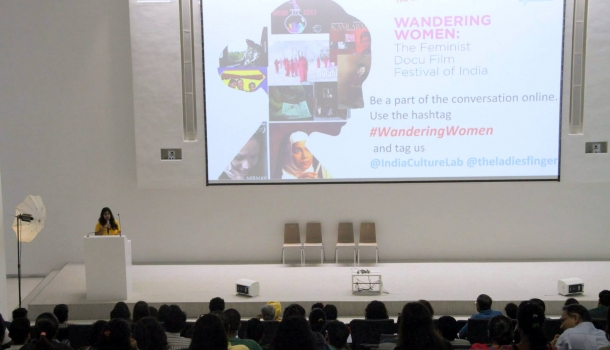 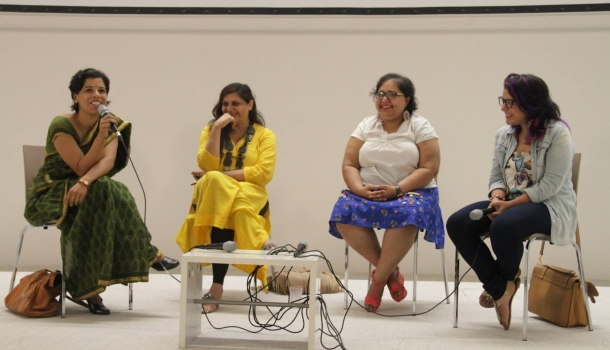 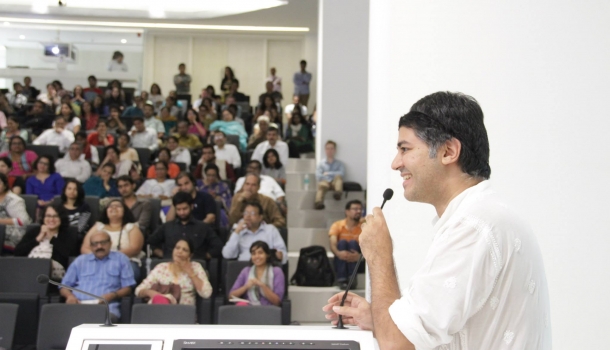 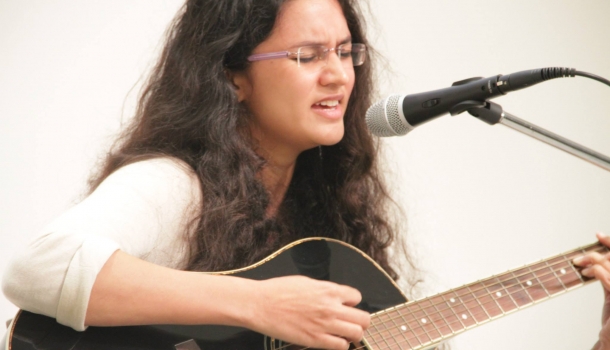 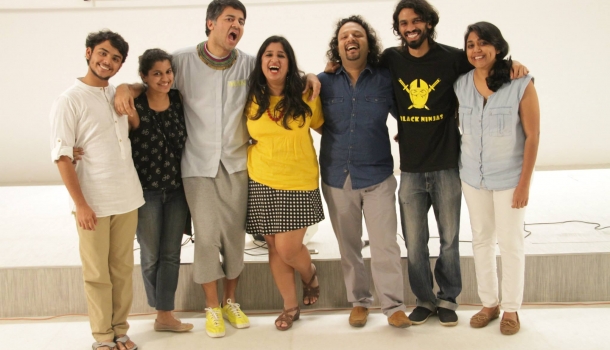 Each year, around Independence Day, our Culture Lab organizes a film festival called Indie-pendence Day, at which we celebrate the spirit of independent cinema from across our country. In 2013, we collaborated with NFDC for the first of these festivals and in the 2014 edition our partners were Films Division. This year, we decided to collaborate with the feminist website The Ladies Finger and organized a two-day documentary film festival at our new auditorium in Vikhroli, through which we explored multiple ideas, narratives and perspectives on feminism in India.

The Ladies Finger website is the result of the effort of an awesome team that includes former Tehelka journalists Nisha Susan and Gaurav Jain, who were also the folks responsible for the Pink Chaddi campaign in 2009. (This was India’s first mass social media response campaign in which thousands of citizens from across the country and beyond sent pink underwear to the offices of Pramod Muthalik and the Sri Ram Sene, after their moral policing activities in a Mangalore pub and threats to disrupt Valentine’s Day that year.)

We zeroed in on the documentary format for our joint event because we wanted to show the range of feminist realities that exist in our country. As Nisha said to us in the early days of our collaboration, she was disturbed that feminism in contemporary India was being addressed as just a post-Nirbhaya phenomenon. We called our event ‘Wandering Women’ as a tribute to all the journeys that women in our country embark upon. These are arduous physical journeys for sure, but also journeys of non-conformity, defiance and of celebration. “Not all who wander are lost,” Tolkein wrote, and we couldn’t agree more. Wandering is often a way to seek and find – ideas, experiences and ultimately, one’s own self. Thus, our festival was a celebration of wandering, through which the films, their filmmakers, and several hundred attendees all connected with each other. It was exhilarating!

The films that we curated were fearless in how they experimented with forms of filmmaking and storytelling and fearless in how they all lovingly embraced all the different ways to be an Indian woman. We kicked off the festival with a fantastic ‘YouTube party’. Here, we showcased online videos made by young filmmakers who have grown up in the Internet age – people like Superwoman (Lilly Singh) and Aditi Mittal. Both their videos are hilarious and hard-hitting commentaries on the conflict between women’s personal ideas of happiness versus what society expects of them.

Among the full-length films, Nishtha Jain’s Gulabi Gang (about the founders of the Pink Sari group of women in the Banda district of UP who fight for rights and justice) was a big hit, as was Bishaka Datta’s Taza Khabar, the story a group of daring Dalit Adivasi women journalists who bring out a weekly community newspaper in UP called Khabar Lahariya. Then there was Pushpa Rawat and Anupama Srinivasan's Nirnay, which dealt with a young photographer recording the aftermath of a painful break-up, and the lives of other bright, young women like her in Ghaziabad. Saba Dewan’s Naach was an emotional film about a family of dancers at the Sonpur cattle fair in rural Bihar – it followed them to their home in Delhi and had the audience in tears.

My personal festival favourite though was Manjuben Truck Driver.  I had curated this film for a festival in Boston ten years ago and it felt great to revisit it. Manjuben is a female truck-driver in Gujarat who defies every notion of gender conformity – whether in her appearance or professional choice. The film is a meditation on her life, and her choices, and the milieu she lives in.

It was wonderful to see Reena Mohan’s Kamlabai, a 1992 film about one of India’s earliest woman actors. I was also mesmerized by Scribbles on Akka – Madhusree Datta’s ode to the 12th century Kannada poet and reformist, Mahadevi Akka, whose vachanas still continue to inspire today’s generation of feminists. As one of our audience members mentioned during the festival, in our country’s past, there have been many feminists who didn't use the word “feminism” - individuals like Ambedkar or the Phules. We need to know these histories better, so we can contextualize the times we live in more meaningfully.

In this regard, it was good to see a film like Paromita Vohra’s Unlimited Girls – which has now achieved cult historic status in our desi feminist film anthology. Made in 2002, Unlimited Girls embraced online culture a decade before it happened and when we screened it at our festival, we realized how relevant it still is. All the questions that the film raises were brought up by the audience. Who is a true feminist? What about intimacy? Solidarity? How can men be part of the conversation? There were many wondering men at the festival and the conversations that we had were extraordinarily nuanced.

We interspersed our film screenings with panel discussions. Comedy star Aditi Mittal – being really funny and serious at the same time – spoke about the constant fight between wanting to say what she felt and what the crowds wanted to hear. She uses the framework of feminism to question and contradict misogyny in comedy. She told us about how she had called her first show 'Things I'm Not Allowed to Say’. Even now, when Aditi performs, she often has to follow misogynist male comedians on stage, whose idea of comedy is to utter a cuss word, or make anti-women jokes. It is hard, but she’s fiercely flying the feminist flag high, as are many other amazing female comedians in our country.

One of the other issues we discussed was whether feminists needed to be angry all the time. Here I loved Paromita Vohra’s response that we should stop stigmatizing anger as anger often leads to social change. “Besides, what about big B?” she quipped. “He is allowed to be an ‘angry young man’ even till today!" Paromita completely dismissed the idea of “angry feminism” or “introspective feminism”, saying that feminism was not about mood types. Actually, as I joked during one of the Q&A sessions, we might as well have called this festival the Paromita Vohra film festival, as Paro was present in almost every film being screened – whether as an actor in the Aunty 303 videos, or as a producer in other documentaries!

We had some heated debates over the commodification and corporatization of feminism. Many products have gotten on to the empowerment trail – such as the Always #likeagirl campaign, Nike’s #betterforit or Dove’s ‘real beauty’ series. These were both praised and vilified. There were also heated conversations about the role of men in feminism. In any case, women making films does not equal feminist filmmaking, as film critic Deepanjana Pal pointed out, and men can make feminist films too, and indeed, so many men are also feminists.

We wound up our event with a music performance. “When it's all over, when the end is in sight, you'll smile and say, the life I live is mine," sang Shubhangi Joshi, and I couldn’t agree more. Feminism, to me is about self-empowerment and an awareness of how linked everything is, and we need to be sensitive of the linkages and structures before deciding our approach towards creating a more equal world.

What made me happiest over the two-day festival was the audience. We had college students, housewives, professors, artists, working professionals – men as well as women - from across the city and also from other cities. We were bound together in a common experience and not necessarily in consensus about anything, least of all, about the definition of “feminist”, but we had agreed to be part of a shared experience and to discuss our disagreements with empathy. Now, if only our parliamentarians would also function this way, no?

I want to end with a special thank you to all those who came together and made this festival possible – both The Ladies Finger and Godrej India Culture Lab teams, and also so many people across the board at Godrej – from the canteen staff to the AV team to our friends at security, who chose to work through the Independence Day weekend so that this festival might take place.

Here is some press coverage about our festival, if you want to take a look:
Shubhra Dixit of The Quint wrote a lovely review of the festival.
Ameta Bal of Art Info contextualised our festival with the larger feminist movement with this piece.

Here is the original post on The Ladies Finger that sparked off the idea of a collaborative film festival between both our teams.

Finally, here is the list of videos we screened at our YouTube party on day one – check them out.