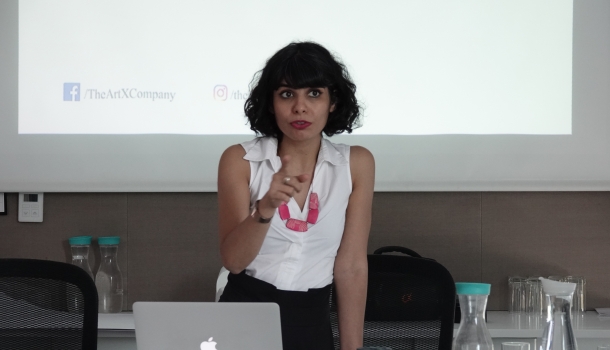 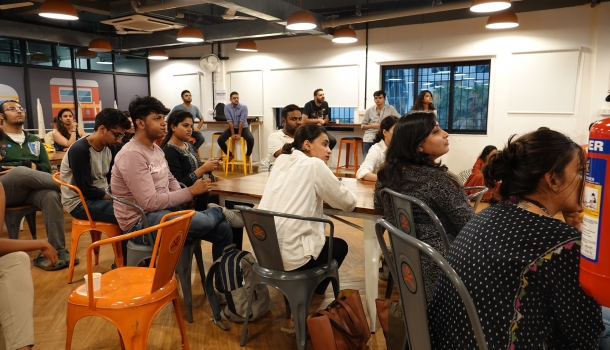 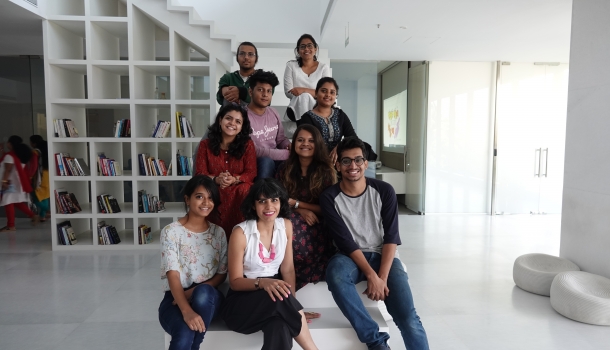 Arts Management can more or less be defined as using business processes and systems in the field of the Arts, and is most commonly found in organizations such as museums, galleries, theatres, etc. Rashmi Dhanwani is the Founder of Art X Co which works towards increasing access to the Arts through the methods of audience building, and arts research. They describe themselves as operating at the intersection between arts and accessibility. In her talk Rashmi talked to us about the company, how it aims to raise the value of the cultural sector, while working with audiences, data, while finding a way to make their work sustainable from a financial point of view.

So what does an Arts Manager do? The role of an Arts Manager encompasses a large number of functions that are imperative to the functioning of an institution. These roles include project management. From deciding on the execution to the outcome and how it is measured, these are covered by project management; programming is another role that is involved with the creation of content. Budgeting is an essential function that enables the institution to be sustainable, as is fundraising, if necessary. Education, outreach, and marketing are also fairly essential to the function of the organisation, and are taken care of by the arts manager, including social media, advertisements, raising awareness about the work being carried out by the organisation. Operations such as venues, security, hospitality, equipment, travel, and logistics are also the responsibility of the arts manager. They may consult for another organisation that may not have the cultural expertise within the organisation, for cultural strategy and curation. Advocating for the group of the sector, for example the work of ACRI, and cultural policy are also included in this list of roles.

The arts managers perform these functions on three levels: namely, the Organisation, the Project, and the Activity. The Organisation could be any art institution such as a museum, a theatre, an art gallery.  The Project could be an exhibition, a festival, an event, etc, which the Activity could be managing a team, working out the licensing and more. Rashmi also mentioned the key skills necessary as an Arts Manager, including knowledge in the form of arts related courses, but in addition formal academic knowledge, one must be well versed with the field. There is a lack of formal academic courses in the field of Arts Management. Rashmi recommends  having a system in place that will ensure that you keep adding to what you already know. Being able to perform functions such as administration, project management, financial planning, customer service, marketing operations are also important. Interpersonal skills such as communication, teamwork, problem solving, time management, are also key.

So where does the concept of Arts Management come from? In order to answer this, we must look at culture itself. A broad way of looking at culture would be to classify lifestyles, beliefs, traditions within culture. Another way of looking at it is to define culture as a creative, artistic expression, having a clear relationship with the audience, and is created with the aim to share. This forms a cultural output which can be shared amongst a group of people, and it is with this definition that cultural industries work with, applying the idea of mass production to the creative output of culture. Producing profit using cultural output embodies very post-colonial values, hence it is relatively new in India. The lenses of value through which cultural output is viewed are different for different organisations, depending on the content they aim to create.

Just like culture, Art can also be defined in different ways, due to its nature of subjectivity, and in terms of representation.  The Indian perception of art, and what it was to represent was (and to a certain extent, still is) very different from the Western perception, especially that which was prevalent during the Renaissance. As long as art has existed, however, a culture surrounding and contributing to it have also existed. A rough timeline of this can thus be created. Pre 1800s, art received royal and religious patronage, with a prevalence of oil paintings of royalty, wealthy nobles, still life paintings depicting tables laden with food. Also popular were depictions of mythological figures or religious figures. These are indications of the main driving force behind art during the time period being mainly royalty and religious figures. The years between 1800 and 1947 could broadly be identified through colonialism. The cultural industry was greatly boosted by industry to include a myriad of different media such as lithography, print, theatre, music (due to gramophones). In Bombay specifically, an effect of the American Civil War was that Bombay became almost the sole producers of cotton, giving rise to a large amount of capital in the cotton producers of the city, and hence private philanthropy also played a vital role in developing the cultural industries of the city. Between 1947 and 1991, post independence, we saw a rise in nationalism and socialism. Nation building with on the rise, institutions like NSD, NID were established, after the release of the Eames report by Ray and Charles Eames. Indian citizens consumed media through Aakashvani, Doordarshan, and the use of cassettes gave rise to music companies, encouraging the building up of the music industry. Between 1991 and 1992, the use of cable TV more than doubled in the country. The creative and cultural industry and cultural entrepreneurships started emerging as their own fields.

Art X Co also [organises] theArts and Culture Resources India (ACRI) Meet, held in different cities, with the aim of creating conversations and interactions between professionals in the cultural and creative industry. The Meets are one aspect of this, with the aim of creating offline conversations and connections through networking meets. The conversations in this space are encouraged to follow a give and take formula. As a culture journalist, what could you offer to someone trying to build their own art institution, for example, and vice versa. What are the needs of the members of these different fields? How can they help one another in fulfilling them?  Along with the meets, ACRI also conducts workshops, presentations of research and non-artistic, industry-facing work, and capacity building initiatives.

The culture industry in the city is developing at an extremely quick pace, and new institutions are being born to satisfy its requirements. Culture, after all, is a way of life, and these organisations perform vital functions to aid it, be it by creating spaces exclusively for facilitating creative processes, creating a greater accessibility to art in the city, enabling thousands of cultural professionals to grow in the field simply by interaction. This growth is made more structured, more defined, more unhindered, by those that are managing these arts.