Supriya Nair on Cultural Journalism: The Joys and the Challenges

Blog » Supriya Nair on Cultural Journalism: The Joys and the Challenges 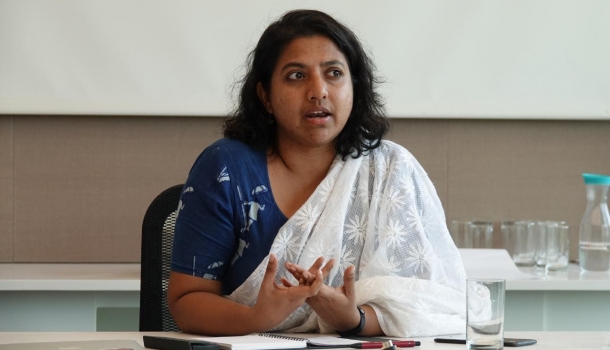 Supriya Nair is a journalist from Mumbai who writes about sports, gender, politics, literature and everything in between (we’ll come back to this shortly). She is the former editor at Brown Paper Bag, and former associate editor at The Caravan. Her work has appeared in The Atlantic, The New Republic, Vogue, and Wisden among other publications.

Supriya talked to the Culture Lab Fellows 2019 about journalism in the cultural space, the changes in the field post the digital revolution, and the various intersections that construct the web of culture itself. We also explored the issue of trolling in the e-world and who is the most vulnerable to this provocation.

The first and probably the biggest challenge that lies in front of a cultural journalist is the question, “So… what do you write about?”

Given the fact that experts and founders of cultural studies have defined the subject at hand in widely different terms makes it hard to answer this question in entirety. While Sir E.B. Tylor would say, “Culture is that complex whole which includes knowledge, belief, art, morals, law, customs, and other capabilities and habits acquired by man as a member of society,” Clifford Geertz would argue that, “Culture is simply the ensemble of stories we tell ourselves about ourselves.” The answer becomes even more complicated as culture is treated as ‘soft news’ in print media. Its reporting does not invite any urgency and these pieces hardly ever make it to Page 1, which is reserved exclusively for ‘hard news’.

In terms of what is reported, it was typically the visible forms of culture such as the visual arts, performing arts, food, literature and other concrete and tangible aspects that were written about in newspapers. Conventionally, print media published these as an ‘add-on’ for the weekend. Most established houses in the country continue to follow this principle.

However, cultural journalism remolded itself with the popularization of new digital media houses and online platforms for traditional print publishers. Today, we can explore the world of culture like never before as the virtual stage ensures that every aspect of culture is taken into account and written about—a concept that was alien to print media. As Supriya explained, “I took a BuzzFeed quiz about my food preferences, saw a ScoopWhoop video about political party conventions, read a New York Times article on the Gen X, a New Yorker profile of the author Sally Rooney, and read a piece on The Guardian about the war between hand dryers and paper towels in the bathroom.” Needless to say, all of these fall under the purview of culture at large and the digital forum provides them the space that the print world couldn’t.

In my opinion, digital media houses have made it possible for cultural journalism to be accessible and more relatable. It is fascinating to me that I can read about the conflict between hand dryers and paper towels online; a debate I have had with a lot of friends in the ladies’ room over what is better for the environment. I get to see the arguments of experts on a subject that may be trivial to some and that helps me connect with people from all over the world. It is very unlikely that something like this would make an appearance in print and thus, it is a blessing of the virtual world that ‘frivolous’ topics such as these find a mention.

However, it is no secret that the on-screen domain has serious drawbacks. ‘Online Wars’ are fought with immense rage where humans are reduced to ‘usernames’ and ‘profiles’. Moreover, Supriya elucidated how some people and communities are more vulnerable to be ‘trolled’ than the others.

Also, the challenge of ‘everything in between’ previously mentioned remains strong. Culture cannot be put into a neat box with definite boundaries. Culture is at the intersection of various pillars such as politics, gender, sexuality, caste, religion, and fashion. Deciding what category an article falls under is  extremely subjective. For instance, Supriya explained how one editor might categorize the Prime Minister’s interview with actor Akshay Kumar under the heading of ‘culture’ since it was branded as ‘an informal and apolitical conversation’. However, taking into account the fact that it is the Prime Minister of the country in the dialogue and one whose persona has always been built on the ‘humane angle’, another editor might categorize it under ‘politics’. The line between these segments is a fine one and it solely depends on the publication, their politics, and what angle they choose to explore.

We must also acknowledge the fact that the journalism sector in general, and cultural journalism in particular hasn’t always been very inclusive and it is still a long battle of representation for many. Supriya recounts the time when women journalists were given only ‘flower’ shows to cover, while all the ‘real’ events were reported by male counterparts. She also deeply respects journalists like Prabha Dutt and Sharda Ugra—women who fought extensively so that their successors wouldn’t have to.

Inclusivity on the basis of caste is still a far-fetched dream for the Indian media. Neither does the media report incidents related to lower-caste groups, nor does it hire people from these communities. According to Al Jazeera’s 2017 report by investigative journalist Sudipto Modal, he could find only 8 Dalit journalists in Indian English Media and only two of them preferred revealing their identities.

Thus, in a world where dominant groups decide what ‘culture’ is in first place, we can not expect to be exposed to the culture of all if not everyone is given an equal chance to report, write and represent whatever community they identify with. Alas, there are miles to go before we sleep.