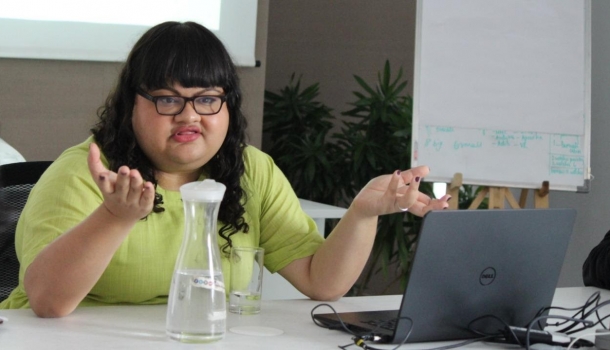 Supriya Joshi is a comedian and writer better known by her Instagram sobriquet ‘Supaarwoman’. She has appeared in the humour battle ‘Queens vs Kings’ and also holds shared credit for the Netflix show ‘Midnight Misadventures with Mallika Dua’.

Supriya talked to the Culture Lab Fellows 2019 about sketch writing in the age of the Internet and explained the production process for the same. Together, we explored the various types of sketches, their writing patterns, the structure they follow and analyzed some comedy pieces.

Supriya started making Vine videos back in 2015 out of boredom and posted them on the Internet without much thought. The videos were only six-seconds long, but Supriya pointed out that even while these videos looked easy and simple on the surface, they were extremely complex. This was because you had to make a viewer laugh in a very limited time frame. We don’t have Vine anymore but we got something even better out of it: Supriya’s entry into the comedy scene as a full time practitioner.

“Sketch writing,” according to Supriya, “is the condensed form of a comedy movie.” I believe that writing a sketch is perhaps more tedious and complex than a movie’s script, given, just as is in a Vine video, the tight time frame. But of course, this was something that Supriya had already mastered even before she knew she was going to do this professionally.

The process of writing a sketch is an elaborate one where ideation is the first step. This involves multiple writers in what is called a ‘Writer’s Room’ and all of them bounce around ideas till they come up with a theme that they believe will be a good choice to write the sketch on. While ideating during our session with Surpiya, we came up with various possible themes that would be contemporary and relevant such as the elections, the release of the second season of Sacred Games and more. We finally settled on the ‘Re-opening of Schools’ as our model topic.

After an idea is selected, making and recording observations is the next step. Supriya emphasized the importance of making an exhaustive list of observations regarding the selected theme and writing down all that came to one’s mind without thinking very deeply. This ensures that we take a well-rounded view of our idea and bring in fresh thoughts that haven’t been given much attention. While brainstorming about our selected topic of ‘Re-opening of Schools’, we listed things such as discussions around the summer holidays, introduction to new teachers and timetable, preparations for the monsoon etc.

Once the topic is finalized and observations listed, it is important to check whether something has already been produced on the chosen theme. If there is pre-existing content on the topic, its format should be examined. Sketch comedy can be written in various forms depending on what it is focused on— relatability, exaggeration, absurdity, and expectations are some examples.

After this is in place, the ‘beats’ or the structure of the sketch comes next. Most sketch writing follows the traditional format of a ‘beginning-middle-end’, however unconventional structures are also seen. To understand this better, Supriya showed us some sketches and we tried to identify the observations made and the structure followed in writing.

Once the structure is decided, the last and perhaps the lengthiest task awaits—writing. Supriya stressed the necessity of writing several drafts for a sketch since it ensures that we ‘punch’ our script. The process of writing should be given at least three days where each day drafts are made to confirm that a pair of fresh eyes see it and can thus improve it. It also greatly helps if someone besides the writers scans the script to bring up something that the writers themselves might have missed.

Supriya’s top tip was to ‘drop the first idea’ that pops into our mind for a theme. Chances are, most people would have the same first idea and thus, it won’t be a unique one. The second idea would have been given more thought and hence, will be a better one to develop.

Supriya also talked about the unspoken rule of ‘punching up’ that most comedy writers follow. Jokes are always made on a group that is in the mainstream and not on the margins to ensure that content that is produced does not further push the subaltern and that it is not insensitive.

It was fascinating to learn about the writing process of sketches and I was very interested in the concept of the ‘straight character’ in the piece who represents the audience and their psyche and watches the humour unfold in front of them. Thanks to the Supaarwoman, the Culture Lab Fellows can now (hopefully) write a sketch one day!