Lab Recommends: Indian documentaries you have to watch

Blog » Lab Recommends: Indian documentaries you have to watch 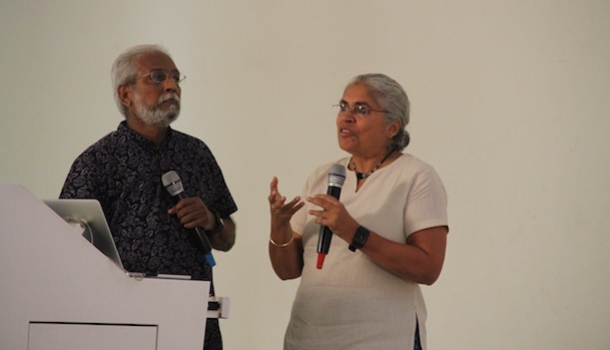 Professor Anjali Monteira and K.P. Jayasankar delivered an amazing talk at the Lab. In their 40-minute address, they spoke of how independent documentary filmmakers have been resisting the establishment with powerful films for decades. The talk was inspired by their National Award feted book A Fly in the Curry.

We thought it is a great time to ask our previous collaborators – documentary filmmakers who have shown their works at the Lab - to talk about their favourite works. You only know the best when you ask the best.

I recommend this film for its strength to speak about a resistance that is always kept at the fringes of society and a commodity so basic the politicisation of which is the most degradable point of human civilisation.

My pick among documentary films on resistance is a contemporary one - Battle of Banaras / Dance for Democracy by Kamal Swaroop, made in 2014. It follows the campaign for the Lok Sabha election in Banaras in 2014, when Narendra Modi defeated Arvind Kejriwal to become the Prime Minister of India. The film does not focus on any leader and looks instead at everything that is wrong with electoral politics and the deep cynicism among the electorate and political parties alike.

I saw Gulabi Gang in a theatre that was reasonably full—for a documentary—and later learned that some people came in expecting a gangster feature film. Greatly to the film’s credit, they stayed on till the end, clapping and cheering. Nishtha Jain’s film is a wonderfully engrossing tale of women empowerment in Bundelkhand, using several dramatic sequences to profile stories of resistance as also portraits of the deeply entrenched patriarchy in India. It engages the viewer making him/her participate in the struggle and celebrate its triumphs in a matter of fact, unsentimental manner.

I stumbled across the film 'Nero's Guests' by accident, whilst attending a workshop in 2010. Perhaps it had such a strong effect on me because I didn't know what to expect. The power and the energy of this film hit me full force. It is an unrelenting mirror held up to those of us who stand by passively whilst horrible things are being done in our names to the powerless and the disenfranchised. If this film makes you feel profoundly uncomfortable - join the club!

Want some more? Here are the trailers of the movies that the professors showed during their talk.

Something Like a War is an Indian documentary by Deepa Dhanraj made in 1991. It examines India's family planning program centered on the gender it primarily affects: women.

The film is Pushpa’s journey as she tries to make sense of her own life and that of her women friends.

Waves of Revolution by Anand Patwardhan

Waves of Revolution made during the repressive days of the Emergency in India documents the 1974-75 uprising of the people of Bihar in Eastern India.

So Heddan So Hoddan by Anjali Monteiro and K.P. Jayasankar

The film is a journey into the music and everyday life of these communities, set against the backdrop of the Rann and the pastoral Banni grass lands.