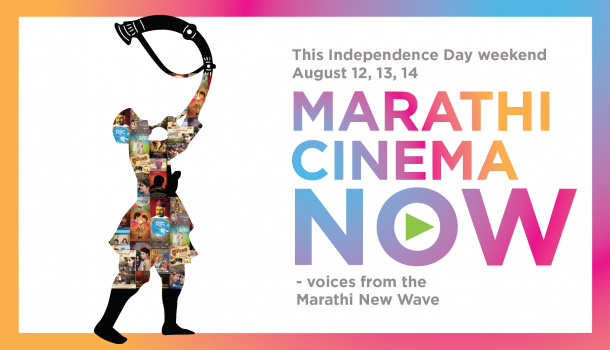 Marathi cinema is a product of the rich cultural heritage of Maharashtra, and stands shoulder to shoulder with the great cinematic traditions of the world. Without relying on big stars, by challenging over-used tropes in Indian cinema, and using humble budgets that don’t affect quality of acting or the final output, the Marathi industry is pushing boundaries of how cinema is made in India.

Marathi Cinema Now showcased a mix of hits and newcomers. Below are all the films that were screened through the festival.

12 August
Halal is a story of love and emotions that deals with the position of women in society today.

13 August
Vakratunda Mahakaaya is about an attempted terrorist attack in Mumbai during the festival of Ganesh Chaturthi.
Watch the trailer here

Katyar Kaljat Ghusali - The Maharaj of the state of Vishrampur arranges a singing competition and announces that the winner will be awarded the status of a royal singer. Pandit Bhanu is then challenged by Khanasaheb Aftab.
Watch the trailer here

Ringan: The Quest is a national award-winning film that tells a beautiful story of parental love in the backdrop of drought and farmer suicides.
Watch the trailer here

14 August
Highway Ek Selfie Aarpar is a story of a simple routine Mumbai to Pune journey that different characters embark on in separate vehicles. It is a film of that escape which all of us yearn for.
Watch the trailer here

LGBT Marathi Cinema - a glimpse
Daaravtha is a National award-winning film that follows Panku, an adolescent boy who is struggling to express himself amidst the conventions of patriarchy.
Watch the trailer here
Mitraa is a film based on playwright Vijay Tendulkar’s story that explores a same-sex relationship between two women.
Watch the trailer here

Natsamrat - A retired actor and his wife fall on hard times after their children's ingratitude leaves them without anything.
Watch the trailer here