The light at the end of the tunnel

Blog » The light at the end of the tunnel 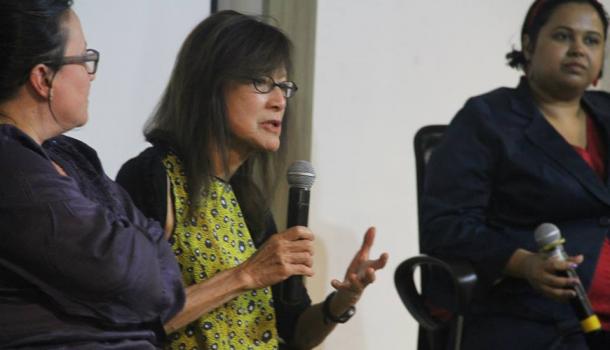 Director Frieda Mock at the screening of her film 'Anita'

This Thursday even as I was watching Frieda Mock’s stunning documentary Anita (2013) at the Culture Lab, my mind could not but wander back to the disturbing, yet beautifully crafted Indian film Bawandar (2000).

These are the bare facts of the two films- Anita Hill’s is the story of an American Law professor who in 1991 accused U.S. Supreme Court nominee Clarence Thomas, her supervisor at the U.S. Department of Education and the Equal Employment Opportunity Commission, of sexual harassment. The very public hearings, and the slew of allegations and counter-allegations made her a nationally recognized figure- idolized and berated in equal measure. Ultimately, Thomas was elected to the Supreme Court by a slim majority, but Anita went on to become a crusader for the rights of all American women at the workplace, at a time when sexual harassment in the workplace was not a topic most Americans were even comfortable discussing. Bawandar tells the story of Bhanwari Devi- a watershed case for the issue of workplace sexual harassment in India. Bhanwari- a Government worker in rural Rajasthan was gang raped by a group of powerful upper-caste men when she tried preventing child marriage in her village-which was part of her job. Her case, which turned into a protracted legal battle went on to the Supreme Court of India, which ultimately issued the Vishakha guidelines (named after the NGO that took up her case) on workplace sexual harassment of women in India.

“It is not about the sex- it is all about power”- poignant words from the Anita Hill documentary that helps one grapple with the modern fault lines of gender and politics. Perhaps it is too naïve to think that all men gladly welcome women into the workplace and create inclusive spaces for them. After all, isn’t empowerment of one side always accompanied by giving up the monopoly on power by the other? This question of course has been turned on its head by Emma Watson’s brilliant new campaign HeForShe, were she expressively argues that men have as much to gain from sharing power as women do- whether at the workplace or at home. This conflict about power becomes amply evident in the victim blaming in Anita’s case, or the ostracism that Bhanwari faces in her own village for daring to speak up against the traditional bases of power- upper caste men. In Anita’s case, things were complicated by the fact that Thomas was a black man- who did not shy away from using this fact to his advantage. To a stunned jury he accused American society of carrying out a modern day “digital lynching” at a time when hanging black men on trees was no longer possible.

Both films also bring out the larger churning that is happening in society where it is no longer surprising for women to have balanced careers- where responsibilities of home and work are both deftly taken care of. This, notwithstanding recent controversial comments that women can never hope to “have it all”. Sheryl Sandberg eloquently argues they can have it all, if only they learn to Lean In. And recently, a gay father wrote an equally striking article in the Washington Times (I’m a dad, so why do people call me ‘Mrs.’?) pointing out that if only men could start leaning in too- at home, not at work- how it would vastly improve the quality of the parenting we offer our children.

After the screening I asked Frieda Mock how Thomas’s election to the Supreme Court made her feel as an American woman, and what impact it had on American society. Predictably enough she was devastated, and Thomas’ many judgments on cases related to women’s rights in America justified all her fears of having a misogynist at the helm of power. But the case also galvanized American women like never before to fight for their dignity and their rights. Anita Hill herself never gave up, and after the initial shock – she barely could speak more than a few words on camera when television journalists asked for her reaction to Thomas’s election- went ahead defiantly writing books, giving lectures, appearing on television shows, and generally speaking to as many women and men as possible, articulating her story and her dreams of witnessing a better tomorrow. Anita still maintains the stacks of letters she received from across the country following her testimony, and the documentary shows  her randomly picking one- it turns out to be a letter she received the very next week after she gained nationwide recognition, where the writer- a man- congratulates her for fighting for the safe future of her two granddaughters.

And that is the light at the end of the tunnel. As one looks as the footages of a frail young woman walking into a courtroom packed with hostile and unbelieving white men, it is her passion for what she believed in because of which today young girls in schools across America know what their rights are, they know what is acceptable and what is not, they know that the state will back them up when they do press the red button. Also, let us never forget Bhanwari Devi, who for years had no choice but to live in the same village as her powerful and influential rapists- people with such connections that an MLA even organized a ‘Victory Rally’ in Jaipur when a lower court let them away, with active participation of the women’s wing of the party which accused Bhanwari among other things of being a liar. “Tell our village elders you raped me, restore my dignity” was Bhanvari’s response when they tried to buy her out. And finally, let us thank her too- for it was because of the courage and conviction of this one woman from an obscure village in Rajasthan that every working woman in India today has legal protection against all forms of sexual harassment.

The screening of Anita took place at the Godrej India Culture Lab on Thursday, 19th March 2015 as part of our regular Film Club series. Learn more about the screening here: http://indiaculturelab.org/events/book-and-film-club/anita/

Udayan Dhar works at Godrej Industries and is a part of the Diversity and Inclusion Team.