Women at Work: What affects female participation in the workplace

Blog » Women at Work: What affects female participation in the workplace 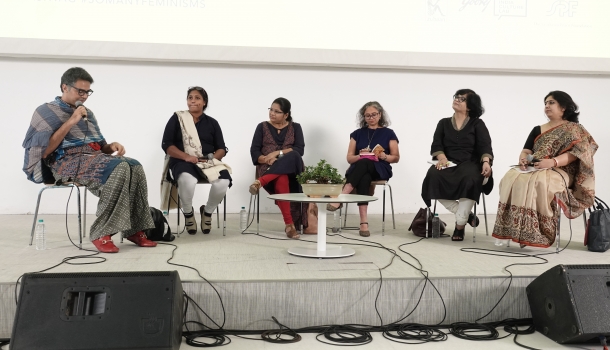 A recent panel discussion on Women at Work: From Fields to Factories, as part of our event So Many Feminisms!, explored the relationship of women across sections of society with labour.

Historically, work has been majorly associated with men, which has turned it into a gendered concept. It has led to an unequal distribution of wages, lack of recognition of women’s work and ultimately a massive divide in how men and women’s labour is perceived. But what has shaped women’s association with labour?

The panelists for the discussion included Nidhi Arora, co-founder and executive director of Dhriiti - The Courage Within, which promotes self-employment and entrepreneurship; Manjula Pradeep, human rights activist and founder of Wayve Foundation; Manjima Bhattacharjya, feminist researcher and author of Mannequin: Working Women in India's Glamour Industry; Jyoti Nale, a development professional and director of programs at Save the Children India; and Baby Halder, a domestic worker and author of the acclaimed autobiography A Life Less Ordinary. The session was moderated by India Culture Lab head Parmesh Shahani.

In India, caste identities have, for long, been an integral part of a person’s occupation. There’s a stark difference in how working women in rural and urban settings are affected by caste identities, but there’s no escaping its impact.

Women often had no freedom when it came to choosing their occupation, and had to engage in professions that their family were involved in for generations. While giving an example, Manjula Pradeep said, “Women who are involved in manual scavenging are considered unclean, and this becomes an identity for them because of the imposed occupation.”

We live in a reality where there are socio-economic imbalances, gender discrimination, and class also dictates how these factors influence women. Domestic work, as a case in point, isn’t recognised as work. We fail to acknowledge these workers as a part of the labour force. The situation is worse for Dalits and tribal communities where women are often vulnerable to sexual violence, and it becomes even more difficult for them to seek justice.

The condition is vastly different for women from upper classes where there are plenty of opportunities for them, and there’s freedom of choice. Nidhi Arora says, “More money in a woman’s hand has changed everything, her husbands’ attitude towards her work; towards how much time she can give at home. But it has been about how much money she earns and till that keeps on happening, the rest of it is value-less.”

The forced imposition of occupation also has deep patriarchal roots. It is believed that women cannot run the family by themselves. The reins of a household lie in a man’s hand leaving very few options for women to take charge of their homes.  It is only in case of the husband’s death or separation, that she gets an opportunity to run the home.

Manjula elaborates, “Widowed or single women are labelled with stereotypes where they are not allowed to attend religious and other social occasions disregarding their contribution to work. A woman therefore slowly starts becoming invisible and is taken for granted.”

Many times, women are oblivious to their contribution to work. In her experience of working with women entrepreneurs in tier II cities in north India, Nidhi Arora says, “Entrepreneurship is not a choice for most women; it’s a default option. It gives them so many conveniences, such as taking care of their household chores, being a mother, a wife, a cook and also earn money that it becomes a part of their daily routine. They don’t count themselves as entrepreneurs and end up being this person who is invisible and doesn’t even get counted in the labour statistics of the country.”

It is not just the invisibility of their work but also how they have internalised the notion that they don’t do any real work. This feeling is not just limited to rural, lower class women but also extends to the middle class. Manjima Bhattacharjya says, “The whole middle-class respectability hinges on seclusion and domestic life and the history of women working outside is very new to the middle class.” She cites three factors that characterise the experience of women in work. It is invisibility, conditionality wherein a woman is allowed to work only if she fulfils certain conditions, such as managing household work and taking care of children along with professional work. And the third is the high cost of stress she pays while managing both fronts.

Manjima says, “This is a framework in which gendered labour is experienced. When women ask for worker’s rights, they are denied them because they are not doing any work anyway; their work is invisible.”

It is often believed that training women in male-dominated industries is the solution to close this gender gap and create equal opportunities for them. However, Jyoti has a different opinion. While choosing industries to skill women, a broader perspective is needed. One needs to consider the scale and reach of the industry and the kind of financial and social impact it can have on women’s lives. Jyoti adds, “While training women in the beauty and wellness sectors, our efforts are often disregarded given that these are feminine vocations. But it’s the third largest driver of the economy. Ultimately by training them in these vocations, we are enabling them financially and adding to their social capital, which helps them take their future generations to the next level.”

Most of us follow a linear progression where education is followed by entering the workforce. However, many women don’t follow this progression, they train themselves and then enter the workforce. Baby Halder, who was married at 12 and had to manage her child, speaks about her experience: “To do something, you don’t only need education, you also need to have the ability to think. With whatever little I knew to read and write, I used that to my advantage, and today I am here amongst all of you. There’s no age to move ahead in life. Someone encouraged me to write about myself, and I did it with all my might. When I started, I had no clue that my writing and story will be appreciated so much.”

Another solution is a significant change in the way work is defined. Jyoti says, “Work is not about giving your hours and labour and making money from it. It’s more of an opportunity to work on your passion and get satisfaction, feel dignified and have better control over life. And when we define work, it should be without the lens of gender. Do you have bargaining power, does it empower you? So there’s a need to define work and what each seeks from it then actually categorising it and looking for solutions to de-categorise men and women’s work.”