Blog » What India's demographic dividend means for its women 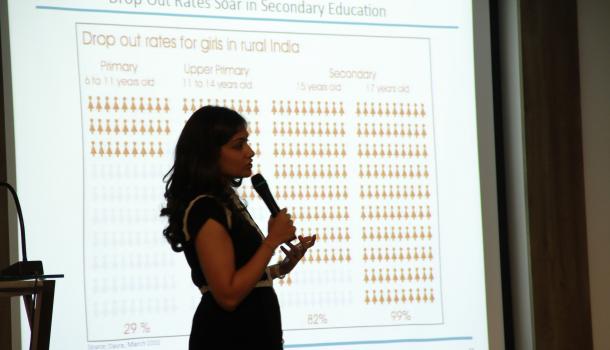 The key points that Roopa presented from her research were:

Based on these insights from her research, Roopa has chosen to intervene in the field of secondary education for girls. While government policies and various non-governmental interventionshave ensured almost universal access to primary education, very few have given thought to what happens at the next stage of schooling. Dropout rates for girls in secondary education are extremely high, with only ~1% of girls in rural India managing to reach 12th grade. And yet, secondary education is very important as it can:

With these factors in mind, Roopa has founded Avasara Academy to help adolescent girls from underprivileged backgrounds realize their potential and improve their access to higher education and employment prospects. It is a small step, but as she said during her talk, the small steps matter as much as the larger ones. Watch the video of Roopa's Culture Lab talk here: http://indiaculturelab.org/events/friday-fundas/women-and-leadership-in-india/

Chitranshu Mathur works at Godrej Industries and is a part of the Good and Green, the Corporate Social Responsibility team.