Walk With Me: Atharva Goes On 'Art Deco Mumbai' Tour 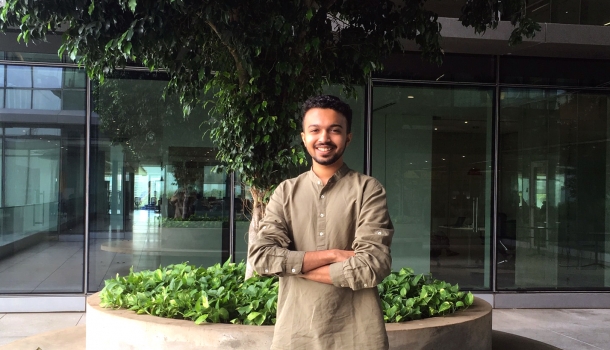 I was trying to make the best use of the handful of sunny days before torrential rains render the city immobile. So I signed up for a Saturday morning art-deco architecture walking tour. My very recent introduction to Bombay art-deco was though the intriguing interior of Liberty Cinema that caught my eye at the Kashish film festival a couple days earlier. In my quest to see and savour more of the symmetry and patterned motifs, I signed up for the walk. With the help of Art-Deco Mumbai, the organisers of the tour, I got what I sought and much more. 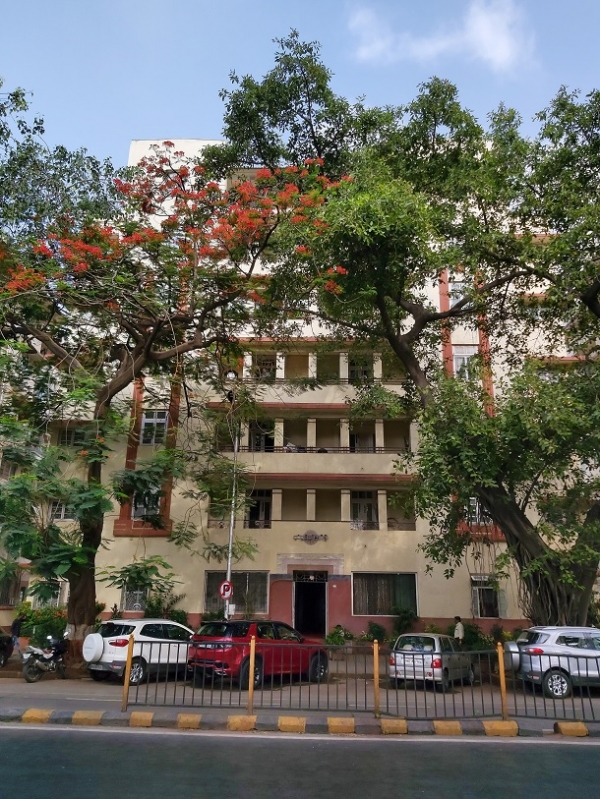 We started at the southern tip of Oval Maidan at a building called Moonlight. The name, engraved with overlapping O’s to apparently signify the changing faces of the moon, set the tone for the building. Right next to Moonlight was Sunshine (shown above). The latter had a sun symbol painted behind its name. The name itself was spelt out in unique typography reminiscent of the LA art deco era. Right below the name were layers of Italian marble colored in different shades to represent the horizon during sunrise. The buildings embodied their names down to every detail. 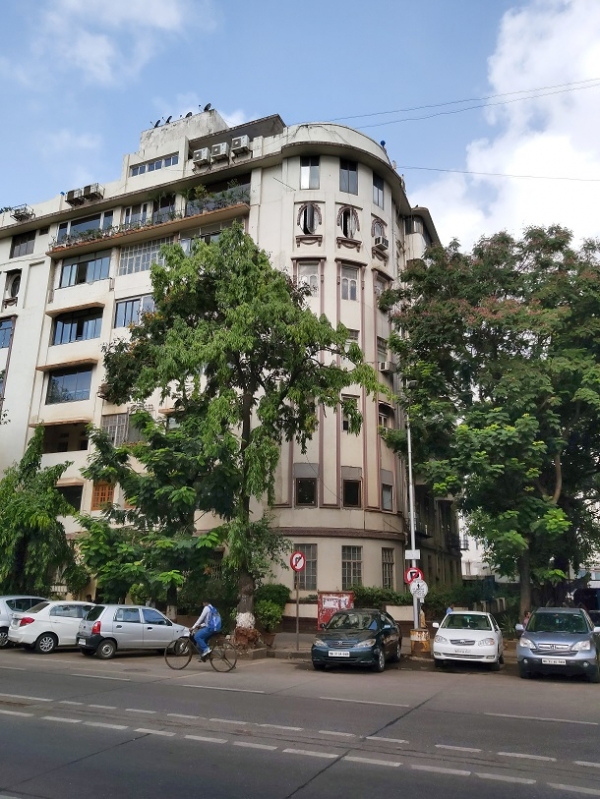 As we walked past more buildings we learned to notice rounded corners, nautical features, and vertical stripes to create the illusion of height. This building shown above showcases all three but has one of its kind oval windows that open outwards. Often, but not always, buildings flaunted tropical imagery like wave patterns on the railings, bird engravings, and green-blue color schemes. 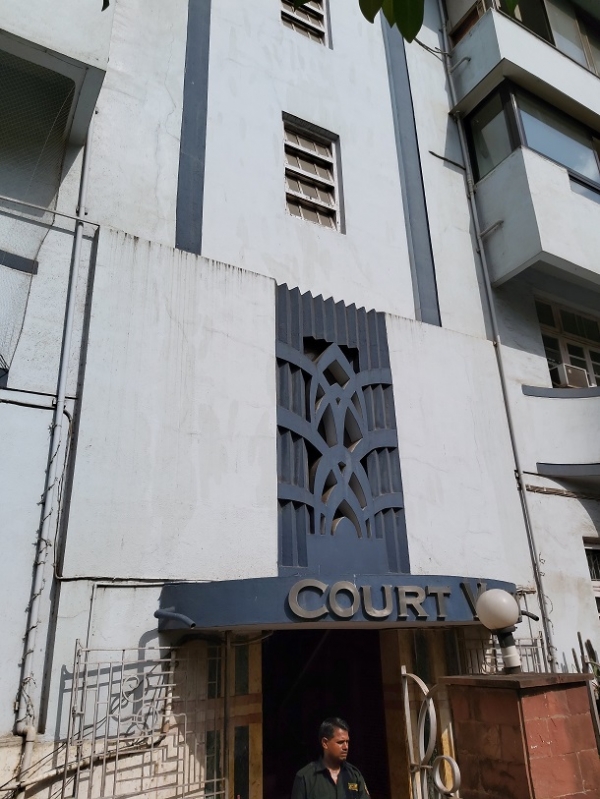 Anything that is nearly a century old finds itself embalmed with a concoction of history and legend, fact and charming fiction. One story goes that in the 1920s Paris Exposition, René Lalique presented a beautiful crystal structure of a frozen fountain that would light up at night. Art-deco architects, enamoured by this image, began using the fountain as a motif throughout buildings in Bombay. I found the frozen fountain motif represented in stone, cement, and on frosted glass that also served to light up the central staircase. Above is one of my favourite renderings of the frozen fountain. 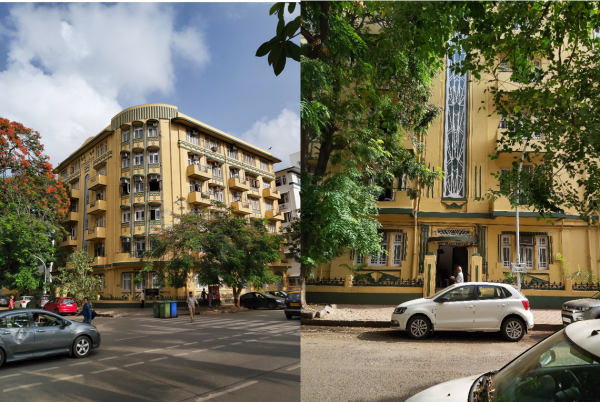 My favorite building was Shiv Shanti Bhavan shown above. Unlike many of the buildings we had seen so far, this one did not have an entrance facing the main road. To reflect the Shanti (peace or silence) aspect of its title, the architect placed the main entrance on the side of the building by the inner street that is lined by trees and has considerably less noise. Towards the main road, instead, the Bhavan displays trios of windows lined with curved shades called ‘eyebrows.’ Hence, among Bombay art-deco nerds, this building is known as the Eyebrow Queen of Mumbai! 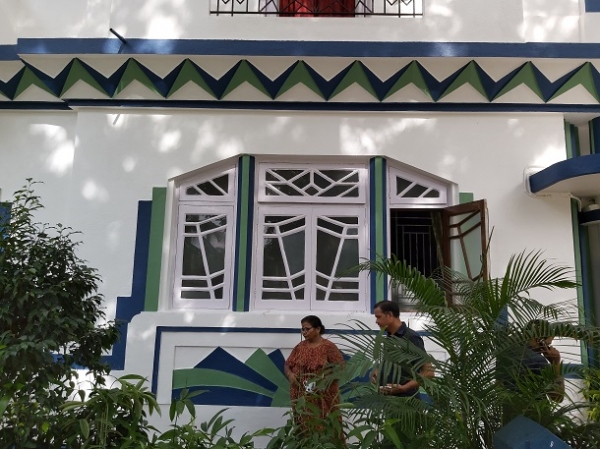 Art-deco buildings are built for sunny days and tropical leisure. They are built to grab your attention and they demand admiration. They are designed to be observed long enough so that the various patterns resolve before your eyes and begin to make sense. 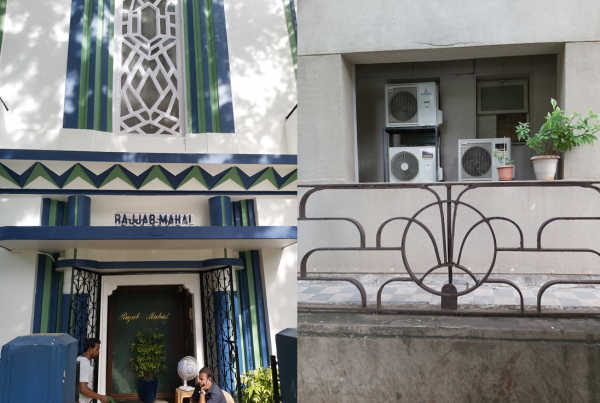 As I got the hang of the architectural style I found my way of appreciating the buildings. You stand in front of the building keeping its title in mind, and let the patterns connect. As they resolve, you begin to draw links­ - consciously and subconsciously – between the colors, the imagery, and the designs on the railings and grills. The building comes to life and oozes with character. 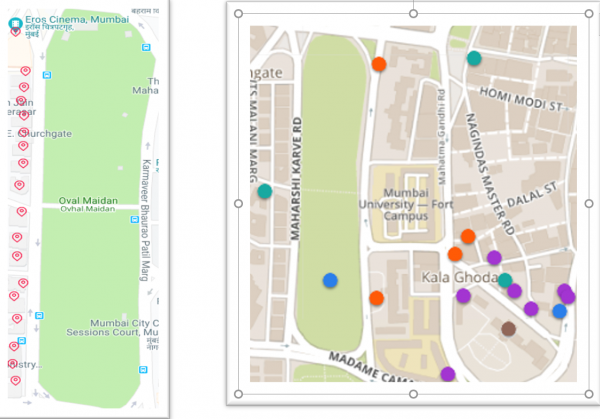 This walk allowed me to engage with my city in a new way by being mindful of patterns and details. It is a way that is easily accessible and that can be used to appreciate many other spaces in the city. Maybe next time it will be the neo-gothic architecture right across the Oval Maidan or the Indo-Saracenic buildings peppered around Fort. While you are in this beautiful, historic part of town, you can use the Mumbai Culture Map to find cultural hotspots like art galleries and book stores in the region to enrich your walk through the city. The screenshot on the left is of a comprehensive map of art-deco buildings in the city by Art-Deco Mumbai and it shows the trail I followed while. On the right is the Mumbai Culture Map that displays the various art galleries (purple), bookstores (blue), and other diverse spaces (orange) in the region. Clearly there is a density of such cultural spaces around the art-deco trail so I urge you to take the trail and explore spaces in the city that you may otherwise have never experienced.