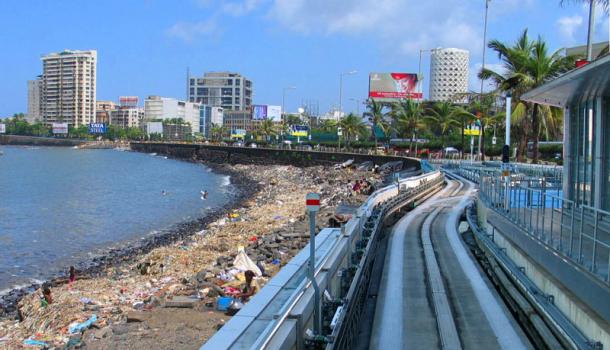 A mashup of Mumbai's Haji Ali with Tokyo's skytrain

When we valorize the idea of public space, we build on the virtues of the community, the commons, equality and citizenship. The fact that cities should have public spaces accessible by all is something that almost becomes an affirmation of mature national citizenship. No wonder the fact that the importance of public spaces in cities is scarcely questioned. What constitutes these public spaces, however, is more often a point of contention. From shopping malls to plazas, from sidewalks to parks, museums and pedestrian pathways, flea markets and bazaars – the contenders for public spaces are many.

What also happens in the name of public spaces is interesting too. In New York, developers are encouraged to create open spaces in front or below their buildings in exchange for additional floor area or related waivers. More often than not, these “privately owned public spaces” are designed to discourage public uses.

New Delhi’s well-protected and spacious historical sites, public parks and plazas stand as a contrast to the action-packed and crowded streets of Chandni Chowk. Similarly in dense neighbourhoods such as Dharavi in Mumbai, where any space is currency, designated public space is virtually non-existent. Or maybe it is only virtually existent. People conjure it in crowded streets during festivals and whenever they have to in the most miraculous of ways. Temples and shrines become thoroughfares, meeting points or oases of calm within the densest of environments and in ways as unpredictable as the English weather. A layer of public-ness settles onto traffic infested streets when collective prayer has to happen and for that moment the waves of urban chaos freeze, allow for that incredible moment of community to manifest itself and then crash back into their usual stormy selves a few minutes later. More often than not, leisurely, commercial and communicational uses share the same space and time: Streets are typically used simultaneously as a playground by kids, a sales point by a street vendor and a pedestrian link to the station, not to mention meeting places for residents, drying space for cloth and advertising space for movies and recruitment agencies.

These two extreme examples, of designed but underused public spaces and the squeezing out of public moments in space-starved neighbourhood indicates that there is more to urban public space and life than the question of having more or less of it in physical terms alone. From the weather to the way we design and live out private and public lives – factors that contribute to the use of urban public spaces are many and diverse.

However there is one very powerful concept that soaks all ongoing discussions about urban public life today with a heavy cloudburst. Before we can say if cities should be more like Chandni Chowk or the suburb of its own past, New Delhi, or whether Dharavi has its own notion of public space or not, or even if New York’s designed spaces are passé – we are distracted by a set of practices affiliated to this concept that changes the terms of discussions altogether. The concept is that of the ‘World Class City’ that seems to haunt the world of urban practice in a clever and deceptive way making the biggest casualty of its lumbering movement the idea and practice of public spaces in any which way.

The “World Class City” is a slogan that seems to be coming directly from a marketing agency and seems to be devised to sell the latest fashion in cosmetic urbanism. It is a visual narrative made of bits and pieces taken from distant places, which exist primarily as urban spectacles in our imaginations. One never encounters the World Class City in reality. The only places where this vision seems to have materialized are cities like Singapore and Shanghai, where authoritarian regimes can sustain its artificial existence. These are closer to the model of the theme park or the “special economic zones”, which achieve perfect order at the cost of forcefully containing the mess outside their boundaries.

This is unfortunately the vision within which the elusive “public space” is, quite literally, trapped today. We reinvent “public spaces” that we believe to be lost when it actually only ever really lived in our imagination. In the face of the nuisance of street life, we are responding in India, just like we did in Honk Kong and Singapore (our model World Class Cities) by elevating private spaces away from the street. These “podiums” or elevated private spaces, whether residential or corporate include “public spaces”, or rather a firewalled version of open, common space. High-tech surveillance and codes of conduit insure a strict filtering of “the public” and tight control of its movements.

“Podiums” are then gradually connected to one another by skywalks, subways, highways, and airways leaving the “street”, and its messy “public” further behind and bellow. And this only to find ourselves starving for public spaces and mindlessly reproducing corpses without soul in place of what we feel we have lost.