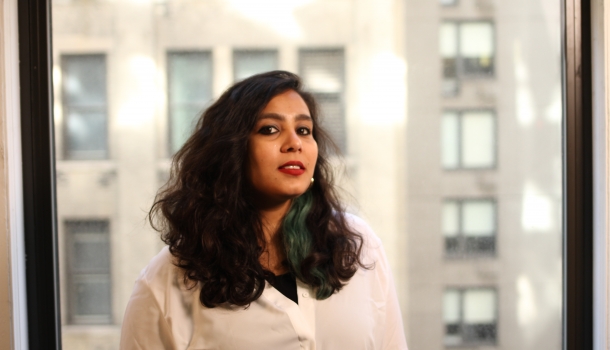 On 17 April 2020 we marked Dalit history month by hosting an enlightening live conversation with Yashica Dutt, journalist and the author of Coming Out as Dalit. Yashica’s candid chat with us spanned everything from her personal journey of navigating her Dalit identity in the newsroom and in fashion. Read on as we bring to you some of the highlights of this conversation.

'When I saw Rohit's facebook post, his last letter basically, a lot of my friends were sharing it..One day I just sat down and read it and it lit a match in a go-down full of barood basically. All I could think about was— that this could be me and that feeling really stayed with me.. I went to his Facebook profile and I realised he sent me a friend request a few weeks before he died.. That was really all the symbol or sign that I needed. I realized that all this privilege that I have, I’m at Columbia, I have had this education. I have been able to make it so far, now I need to do something with it. That's why I started a tumblr page called Documents of Dalit Discrimination where I wanted people like us, I mean Dalits who are hiding their caste to have a safe space to talk about their experiences. I did not know such spaces existed and I’m sure that they did but I just did not know. I realized that I can’t ask anybody to reveal their identity or talk about their experiences I will be a hypocrite..I realised that I need to come out first. I needed to tell my story first and that's what I did in a Facebook post and it was picked up and here we are.’

On Dalits in the newsroom:

'This question, this intensity of being found out, if people are hiding about their caste or not getting the right kind of respect or bylines is a valid concern for Dalit journalists and has been for a long time. Especially after I wrote my book so many Dalit journalists have written to me saying, 'I am Dalit too but I can never talk about it because I know that either they will not give me the promotion that I deserve, I will never be allowed to become an editor the way I want to or if I do a story they will always say oh you're biased because of course you're Dalit or maybe I will be pigeonholed into just doing Dalit stories or I will have to justify my position as a Dalit person every time a Dalit public figure does something… We are still looked at as the other whereas everyone else, non Dalits are looked at and are treated as people who deserve to be there.’

About Dalits in fashion and her personal journey with fashion:

'Purushu Ari, he wrote back to me saying that you know, ‘fashion has always been an upper caste and upper class space.’ Whether it is designers not giving proper credit to Bahujan and Dalit workers who are working - who are craftsmen, craftspeople, who are working in handlooms... or the fashion institutes being these highly upper class spaces, or fashion magazines. It does not create a space for diversity in participation, in style, people who can bring these different points of view. As far as being Dalit is concerned.'

About personal presentation and why it is political:

'One of the biggest criticism I get at this point is that you don’t look like a Dalit person. That makes me really think what is a Dalit person supposed to look like? Are we only worth of your pity or of your empathy if we look like victims to you? If I am choosing to express myself in a particular way that I find freeing why is that an issues? why does that hurt our sensibility? Because you feel that equality should come at a cost?

…The way we look is a very conscious decision. It is because we are through our personal presentation and style we are fighting back against this normative expectation of what Dalits should look like and sound like and how they should behave.'

Why caste is not only a Dalit issue:

'Caste is not just a Dalit issue. We all privilege from the caste we are. I am not telling you to be ashamed of who you are but just to acknowledge that if there's a really poor person who is a Brahmin and a really poor person who is a Dalit, the Brahmin person will have significant social and cultural advantages compared to a Dalit person, who will on the other hand have disadvantages. There will be a difference in their trajectories and success and how they are able to live their lives. and that is the structure that we are looking to dismantle.'

On the importance of Dalit publishing houses:

'It's really important for Dalit publishing houses to make space for Dalit literature but at the same time we have to hold other publishing houses accountable as well, and talk about "well if you can publish books after books published by Brahmins and other castes, but Brahmins in particular, then well why aren't we doing that for Dalits? Where is the balance and the parity and the diversity in your content?" So that's something we can definitely hold them accountable for as well but totally, Dalit publishing houses are extremely important in moving Dalit literature forward because their perspective is going to be way more unique and they are going to allow Dalit writers to say things powerfully that maybe other publishing houses might try to censor.'

About the relevance of Ambedkar’s clarion call for the Dalit community- educate, agitate, organize:

'We absolutely should be organizing but also at the same time, understand that it doesn’t look the same for everyone. Not everyone has the same capacity to be involved. This is a lot of hard work. This is intense and its dense and it takes a toll when you’re you are constantly focused on suffering of your own people and yourself. If you are involved in that kind of work- take breaks. Take care of yourself. ‘Self-care is political’ as Audrey Lorde said that- you must focus on that. But definitely organize. Be a part. When you’re a part of this larger community is when you keep energized. That’s how you stay involved so yeah- educate, agitate, organize- still extremely relevant in India today!'