Smruti Koppikar on Cities in Crises 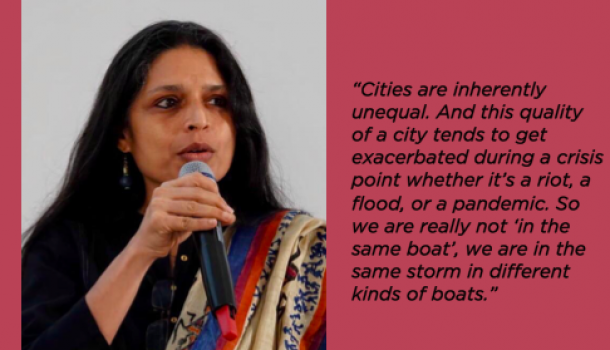 This year’s series of masterclasses for the Leadership Programme 2020 closed with a session by journalist and urban chronicler, Smruti Koppikar. Smruti has been a Mumbai based journalist for nearly 30 years on various subjects and writes about transforming cities with Mumbai as her focus. We first met Smruti on a panel discussion as part of Migration Museum where Smruti talked to us about the politicization of economic migrants. In this masterclass, Smruti talked to us about the cities, pandemics and the inequalities that bring on crisis points in cities particularly in relation to identity and nativist self-identification.

Smruti used the example of the city’s response to the COVID-19 pandemic as a starting point for her discussion on the deep inequalities in cities. She drew our attention to the popular media rhetoric about the pandemic when the first few cases had started to emerge: that ‘we are all in the same boat’. However, as news of the migrant crisis caused by the lockdown started to emerge, Smruti remarked that we had to confront the reality that ‘we were in fact, in the same storm’. In her analogy of the storm, the rich had the privilege of luxury liners, the middle class had boats while the poor may have had only a raft to stay afloat. Her analogy illustrated the exaggerated inequality of cities during crisis points like riots or pandemics.

Smruti then addressed the question of what makes cities a fertile ground for epidemics and crises to happen. The first point that makes cities so vulnerable for such crises is the fact that cities are highly interconnected and this makes them especially vulnerable to pandemics. As the exchange of goods and people occurs across borders, so does the exchange of viruses. This is why news of what was happening in Wuhan should have been fair warning for what was to happen across the world.

The second point she made was that a brief look into urban history tells us that pandemics and epidemics have always been part of the history of large cities i.e. what the world was facing in 2020 occurs roughly once in a century. She pointed out that the law that Government of India have relied on to tackle this pandemic is the Act that was brought in response to the Plague of 1896. This is called The Epidemic Diseases Act of 1897. Across the world, cities have had similar responses to large scale epidemics and pandemics. They begin by shutting down commercial centers, large healthcare facilities being set up with multiple beds and the stitching and distribution of masks. Drawing a parallel between 2020 and what happened in Bombay during the Bubonic plague, Smruti commented that even though we think we have become modern, our ways of handling the pandemic echo much of what we did hundreds of years ago. Smruti also touched on how while inequalities in cities lead to pandemics, pandemics also shape cities. At the end of the Bubonic plague, urban planners in Mumbai looked into how they could build infrastructure so that they could let sea breeze enter into the inner parts of the city.

Moving to the question of identity, Smruti first addressed how economics shapes identity in the city. Cities are often seen as economic, cultural and innovation hubs but with this is also comes the delineation of the productive and consumptive value of the city. That is, the more focused on luxury and spending a city becomes, the less productive it becomes. As cities become less productive, they also tend to lose their character and their people and the city has to then eventually be reinvented. This led Smruti to ask the question- What happens when this kind of imbalance comes down to people? How are you seen by the city? Are you seen as a big spender or are you someone who adds to the productive value to the city?  Who do you need to be to have a place in the city? She used the example of Dharavi to expand on her point: In her example, so long as Dharavi was seen as a unclean space in the public imagination, there was a clamor for it to be broken down - but the moment it began being presented as an economic hub which has a productive value, popular rhetoric on it changed and it began to be seen as a place to be protected thanks to the economic value it brings. For Smruti, cities demand that one either has to be a great spender or a producer of economic value to have place in the city. This insistence of either being a worker or a spender in city is what one has to grapple with to have find their identity in a city. Consequently, anybody who doesn’t fit into this paradigm is seen as ‘the other’.

The next layer of identity in a city that Smruti unravels is that of politics and how it shapes the city by asking the question- ‘who does the city belong to’. The answer to this question differs and is constantly redefined based on what is convenient to the politics of the time. To her, the pandemic was an opportunity to rediscover migrant identities and nativism in cities. The notion of ‘the other’ is embedded in the city and the pandemic merely brought them to sharp focus. For Smruti these moments also challenge the myth that the urban identity is essentially apolitical and they reinforced the fact that the urban identity is a very political identity. More importantly, those who hold political control also drive the narrative of belonging to the city. The fractures that these definitions create add a layer of separation to the existing economic inequalities in the city.

Smruti also touched on why the concept of ‘the other’ is important to those who are in power — because it helps to lay claim over resources. For instance, in a feud over who should get access to water, ‘the other’ is usually the one who gets last pick. Questions even of resource management come down to questions of identity. If one thinks back to festivals of Mumbai and who can celebrate them freely and openly and use resources of the city during festivals is also a political question. Moreover, the idea of ‘the other’ provides a convenient scapegoat for people looking for someone to blame for the many problems of urban life. Whereas overcrowding, crime and issues with infrastructure are issues that cities face globally, here, ‘the other’ becomes the most convenient group to blame for these issues. While the concept of ‘the other’ is well defined, there are also marked out exceptions to the rules. All those who come migrate to city do not become ‘the other’. An example of this is how film stars like Amitabh Bacchan and Shahrukh Khan are treated by the city. Though they are migrants they are not treated as outsiders ostensibly because they are not poor. Therefore, who is seen as ‘the other’ is also dependent on class. Finally, the notion of ‘the other’ also brings to ‘the native’ a sense of benevolence.  For instance, when cities in india saw an exodus of migrants, there was rhetoric about ‘why they cannot stay in the city?’ and that ‘the other’ must be grateful for the benevolence of the native.

This brought Smruti to her closing questions— is there an identity of a city? If yes, how does one begin to unravel it? How does one arrive at it? Does this identity change over time or over decades? What causes it to change? Do changes in infrastructure or large scale projects determine the identity of the city? Does a city’s identity get set by its built environment, its people or the interaction between the two?

Smruti sees this as a palimpsest that one can arrive at by thinking about how the city speaks to each one of its people and what it says to each of us. For her the question of what makes the ‘spirit of Bombay’ then is a question that remains to be answered.