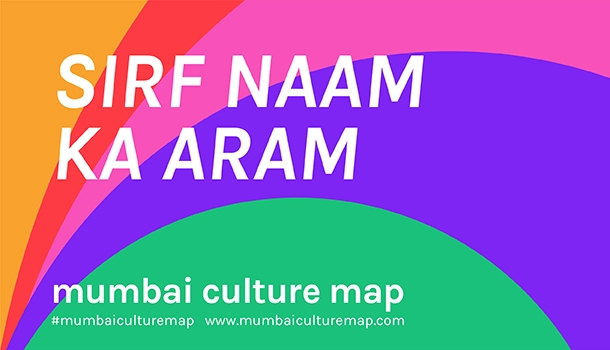 There is no one centre for culture in the city, as the colony of Aram Nagar, in Andheri. Culture is found in many pockets across the city, in different shapes and forms, and as the Mumbai Culture Map shows, Aram Nagar is one such pocket.

In a hushed corner away from the shor and tamasha of the metropolitan, Aram Nagar quietly nurtures a booming alternative cultural life amidst its labyrinthine lanes. The colony, with dusty, old cottages and the constant chirping of birds in the tree-lined network (read: maze) of narrow gullies can be deceiving in its appearance. Several bungalows have been repurposed to serve as media houses, performance spaces, gyms while still retaining their rustic, old-world charm. In just the last two decades, Aram Nagar has emerged as an unusual cultural centre buzzing with activity.

Theatre and performative arts, especially, thrive at Aram Nagar. All the world’s a stage, and if not, at least the world of Aram Nagar is.

Keeping up with the eccentric and eclectic vibe of this cultural hub in the city, we’ve numbered this listicle on Aram Nagar in a way that’s a tad bit... hatke!

From the makers of the indie film ‘Ship of Theseus’ and ‘Shasn’, an innovative board game playing with politics and ideology, Memesys is as alt as it gets. Equipped with a media studio and virtual reality technology, Memesys hosts frequent screenings and talks offering fresh insights on culture, technology, philosophy, literature- you name it!

From film clubs to experimental performances to short film festivals, Rockstars is always ready to rock out! Aimed toward celebrating love for humanity, the small studio is a spot teeming with art and culture.

A co-working space for artists on weekdays transformed into an alternative performance space on weekends, Harkat Studios clearly dons many hatke hats seamlessly. Its sun-filled studio with snug sofas, colourful rugs, and countless plants lends it a very homely vibe- Harkat is culture wrapped up in a cozy blanket.

There is no such thing as too much acting at OverAct. This alternative theatre space puts up plays, acting workshops, stand-up acts, jam sessions, and many more diverse productions. Theatre-lovers, your community is waiting for you over at OverAct!

Cats, coffee, cakes, books, board games. Do we need to go on? Cat Cafe Studio is a quaint place to chill that hosts around 20 people at a time, and twice as many cats! If you’re lucky, they may even have creative performances lined up.

Exploring the colony all day and still not ready to lay Aram Nagar to rest? Don’t worry, the area offers you a rich nightlife too. Even after a whole day of walking around Aram Nagar, if you just don’t want to go home, you can always go to The House! Every night at The House is sure to be a fun-filled experience- they have karaoke nights, open mics, jam nights, and much more. If culture were a party, The House would be the host.

Why have we numbered the cultural spaces this way, you ask? Simple. The numbers are addresses. They correlate to the numbering of the bungalows in which they have been set up.

In fact, the list has been arranged so that you can visit them by walking in a (not-so-)neat circle around the colony. But these numbers still don’t follow ascending order.

This is because the bungalows were numbered based on the chronology of possession, back in the day when Partition refugees moved in. So it is that we end up with Bungalow No. 1 at the very end of this twisty-turny article on this twisty-turny locality. Classic Aram Nagar! Or should we say...alternative Aram Nagar?