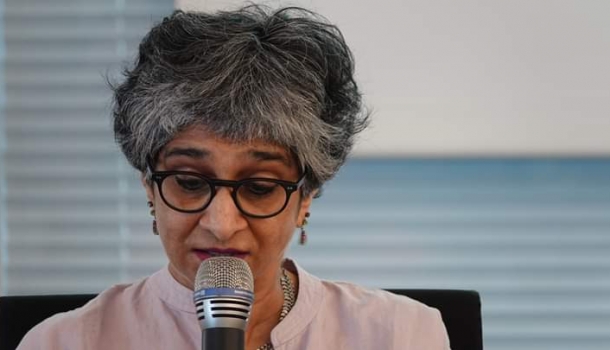 How does one define rape? Are there even universal definitions that could claim to cover the extremely varied nature of this, perhaps the most heinous crime a person could commit? Rape is something so ubiquitous in our world, but despite this, the conversations around it still tend to be in hushed tones, tend to tiptoe around the aspects of it that aren’t clearly in black or white. We can all agree on this that Rape is (capital B) Bad. However, when it comes to the more complex aspects of this crime, such as consent, our opinions aren’t unanimous. In recent times, the subject of consent has been broached by mainstream feminists by the chant, “No means No.” But is it really that simple? What about consent obtained under duress? Or when consent is readily given, but out of fear of the consequences?

In her book, “What We Talk About When We Talk About Rape”, author Sohaila Abdulali recalls an incident narrated to her by a friend of hers. A teenage boy with limited sexual experience, who wanted to expand his horizons, visits a brothel and pays a young woman, who then leads him to a room. However, she refuses to give consent upon his request for her to undress, and he does not compel her further. What about here? Is he entitled to her consent because he has paid? Is it possible to purchase anybody’s right to consent in this manner? Obviously, this isn’t (and shouldn’t) be the case, but it is situations like these that highlight why “No Means No” will never be nuanced enough. “Your ability to consent depends on who you are, and where you are.” She cites a few examples, such as a prisoner submitting to guard to prevent further abuse. Is this consent? Considering the consequences they could face if they fail to submit? Perhaps not. These kinds of situations must be a part of our discussions about rape, because by excluding them, we also exclude a large number of victims by simply invalidating the conditions under which they consent.

“What We Talk About When We Talk About Rape”, is an organic book, and consists of exactly what its title suggests. Sohaila describes her thought process behind the structure of the book, saying that she wanted to approach the subject with a level head, perhaps bring the temperature down a little bit, pointing out the extreme dichotomy in the way we approach rape, having responses ranging from hysteria, to “it’s just sex.” A few chapters in, she realized that the work seemed a little devoid of emotion, considering the subject matter, and hence she introduced the literary device she calls the Brief Pauses. A Brief Pause for Horror was written for readers that needed to be reminded of the awfulness the actual act.

In the chapter called A Brief Pause for Confusion, she talks about the Me Too movement, that raised questions about women in abusive relationships. Questions like “If he was abusing her, why did she stay?” and “Maybe it wasn’t so bad?” [As she puts it, (and I firmly stand behind her on this), “No, No, No.”] The emotions of a survivor of rape to her rapist indicate nothing about the severity of the crime, or their trauma. Sohaila describes the compassion towards the men who had raped her so many years ago, recalling how she saw them as fellow human beings, and how this actually saved her life that day. She clarifies that she does think of them as bad people, as maligned, brutal, vicious. She brings this up to point out that the fact that a woman with confused feelings about the person that hurt her doesn’t make her any more guilty, and them any less. The pictures of women, smiling and hugging men whom they later accuse of rape, do not undercut these accusations in any way. Again, the nuance of the situation gets overlooked in the eyes of those that see in black and white, and the confusion experienced by survivors of assault, especially when the perpetrators are those known to them, is used against them, to undermine their accusations. Until and unless this confusion is better understood, we as a society will continue to mistreat such survivors.

Another aspect of the discussion around rape, is what happens after said act, how does one rehabilitate a rape survivor? She answers this by stressing the importance of creating a space for the survivor, where they feel safe sharing, or even just providing company, she explains how this had helped her recuperate. She explains how there are aspects to this, namely justice, closure. Criminal justice tends to be (as we are all too familiar with) flawed. She cites a situation where a survivor of rape could be urged to take her rapist to court, to prevent him from committing these crimes again, which is an example of societal justice, but perhaps this isn’t what she needs, and this would only be detrimental to her mental wellbeing. Sohaila describes the chapter called “The Quality of Mercy” and explains using the example of the book “South Of Forgiveness” by Thordis Elva and Tom Stranger[, and the Ted Talk about this book], which describes how a survivor of rape tracks down the perpetrator of said crime, in order to have a conversation, and perhaps even seek closure of a sort. She follows this with the example of Nokubonga Qampi, more commonly known as Lion Mama, who killed one of the three men who raped her daughter, and wounded the others. This was also a kind of closure. The point here is that there is no one single solution to the rehabilitation of a survivor of rape. What always does help is providing a space for them to be able to heal, whatever form this healing may take.

Sohaila was gangraped at age 17, by a group of men, while she was spending a day in the mountains with a friend. They managed to survive thanks to Sohaila’s ability to convince the men to leave them. Three years later, while doing her thesis [] on the subject of rape, she returned to the country to write an article in the magazine Manushi, about the incident. She did not tiptoe around the subject; she did not mince her words. For the time that it came out in, this was a huge event. Although it created a bit of a stir, it only stayed in the public consciousness for a short while before fading into history. That is, until Jyoti Singh was raped and murdered in 2012, and the country erupted in outrage. Her article was widely shared, and she was made to relive this incident again and again, as more and more people read the article and reached out to her. She decided then to write a piece on the subject, seeing as three decades later, she had more to say. This came in the form of an Op-Ed for the New York Times, which also went viral. She began  receiving word from many acquaintances of hers that were unaware of the incident, and was asked to write a memoir, which disinterested her, since she did not want her identity to be centered around the rape that occurred, explaining that it wasn’t the biggest thing that happened to her. Instead of this, she wrote a book on the conversation surrounding rape. She talked to around 30 rape survivors, from 5 different continents, and describes this as her manifesto, something more personal than a memoir, and thus created the book known as “What We Talk About When We Talk About Rape”.