RJ Rohini Ramnathan on songs about the Partition from Bollywood

Blog » RJ Rohini Ramnathan on songs about the Partition from Bollywood 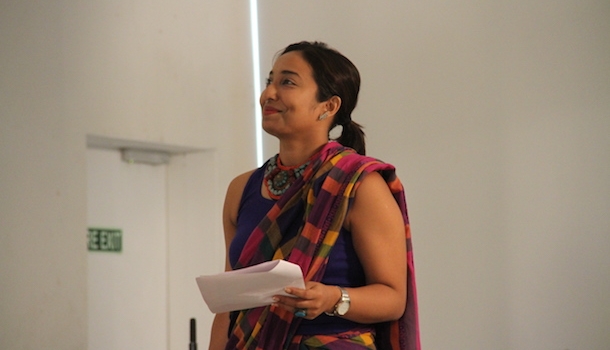 I had the good fortune of collaborating with Godrej India Culture Lab for Museum of Memories: Remembering Partition, a three-day event that explored different aspects of the Partition of the Indian subcontinent. My task at the event was to talk about how the Partition has been spoken about through songs in the Hindi Film Industry.

I am a radio presenter with Radio Nasha 91.9 FM - India’s first cool retro radio station. As a build up to the event I interviewed Govind Nihalani (Click here to check out the discussion) and Ramesh Sippy who spoke about their work that dealt with the Partition - Tamas and Buniyaad respectively. These interviews gave me great insights into songs depicting Partition in Indian cinema.

If I asked you to name your favourite Partition song, I don’t think a single one will come to your mind immediately. Post partition, India focussed on nation building. Bimal Roy, Raj Kapoor and Guru Dutt made films on the theme of social regeneration. We’re going to look at songs from these movies and a few contemporary ones.

I love how Raj Kapoor is trying to establish the idea of Indian-ness in Shree 420. Traumatised by Maya, the vampy seductress played by Nadira that represents the West, the hero only finds relief when he goes out to the poor who are singing Ramaiya Vastavaiya (Lord Ram, you will come - translated from Telugu).

Although Pyaasa is Guru Dutt's masterpiece, but it is on lyricist Sahir Ludhianvi’s poems that the film takes flight. Sahir's words seem to articulate Guru Dutt's own view of the world. You must listen to Rahman’s speech in the song to understand how a poem can be translated onto the screen. Guru Dutt wanted a feeling of despair to be echoed in the poet’s ill-fated ‘memoriam’.

Our next soundtrack is also a Sahir soundtrack - but here, the despair finds itself in the film’s narrative, beyond just a song.

The first film which addresses the Partition directly was released in 1959. Dhool Ka Phool is produced by B. R. Chopra and it was directed by his brother Yash Chopra. This was Yash Chopra’s first movie as a director. Steeped in Nehruvian secularism, the story revolves around a Muslim bringing up an 'illegitimate' Hindu child.

In Yash Chopra’s next film, Dharmputra (1961), Chopra reverses the theme - a Hindu family brings up an illegitimate Muslim child. The raw reconstruction of the Partition riots created riot-like situations at theatres screening the film. The film flopped at the box office. After Dharmputra's debacle, few directors tackled a communal theme in Hindi cinema. Yash Chopra never made a political film again and stuck to love stories instead till many decades later.

In Manmohan Desai’s Chhalia, Shanti (Nutan) is married off to Kewal (Rehman) on the eve of the Partition. But while the two families move away to Delhi from Lahore, she inadvertently is left behind, and is forced to stay with Abdul Rehman (Pran). When she returns to India five years later with her son, she is first welcomed by the husband with open arms but is disowned when the child identifies himself as Anwar, and his father as Abdul Rehman. This idea of purity has been explored many times in Indian cinema, but this was in direct relation to the Partition. In this song, Raj Kapoor makes a plea to Rehman to accept his wife back after the Partition as the women sit in ‘unclaimed pits’ for their own husbands to come and accept them.

Pinjar is a 2003 Indian period drama film directed by Chandra Prakash Dwivedi. The movie is about the Hindu-Muslim problems during the Partition of India. The film is based on a Punjabi novel of the same name, written by Amrita Pritam. Urmila Matondkar, Manoj Bajpayee and Sanjay Suri are in the lead roles. Besides critical acclaim, the film also won the National Film Award for Best Feature Film on National Integration.

All of the tracks were composed by Uttam Singh, with lyrics by Gulzar. Tracks Charkha Chalati Maa and Waris Shah Nu lyrics by Amrita Pritam.

You might wonder why I left out Gadar - well, because it strangely doesn't have a song that reflects the Partition - except if you look at Ud jaw kale kawe - most songs are either celebrating Punjabiness - or are love songs.

Based on Bapsi Sidwa’s Ice Candy Man, Sidhwa's novel deals with the Partition of India and its aftermath. The songs of the film don’t particularly discuss the theme of Partition but it is one of the few good films that have insisted on talking of the aftermath of Partition in India and Pakistan.

A film on the partition that perhaps left the most lasting impact for decades to come was Yash Chopra’s Dharamputra. It questioned the Partition and Hindu fundamentalism but was such a box office disaster that it perhaps prevented the oft-superstitious and overly cautious industry from delving into such hard hitting subjects for a long time to come.

The films that did come after that phase were part of the ‘parallel’ cinema movement like M S Sathyu’s Garm Hawa which lacked the musicality of your regular Bollywood films. Further on, even films in the mainstream lacked a soundtrack worth talking about, much less play-able on radio with songs serving as mere movement/mass migration montages (Pinjar) leaving us with very little music specific to partition. There wasn't too much to sing about anyway I guess. One can only hope more cinema and music can help us, as a nation, to deal with perhaps the most defining separation of our own personal, collective history.