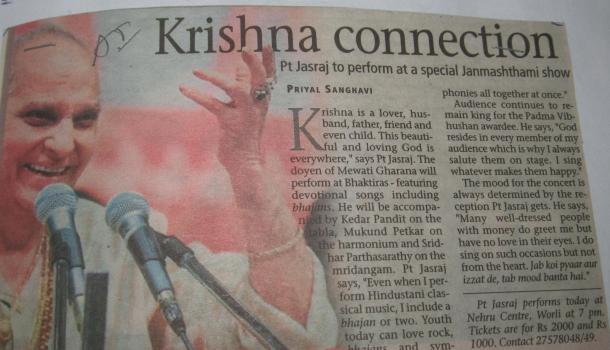 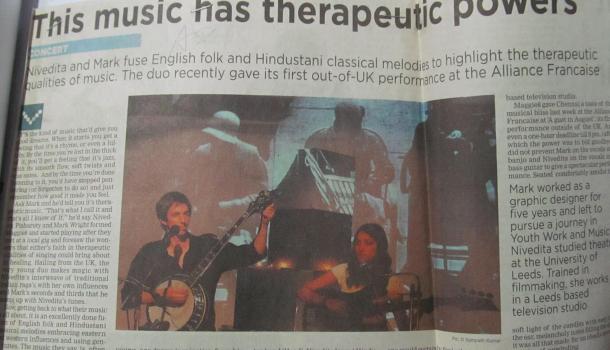 In 2007, the formation of the  ‘All India Musicians Group’ (AIMG) headed by Mumbai-based businessman and sitar player Arvind Parikh and including famous artistes like Shivkumar Sharma, Pandit Jasraj, Zakir Hussain, Hariprasad  Chaurasia,  Chitravina Ravikiran and Sudha Raghunathan among others was a signal of this alarm. The purpose was to ‘counter the dwindling interest in Indian classical music in the country’ (Devidayal, Times of India-July 11, 2009) even taking the matter up to the Prime Minister’s office to draw ‘government attention and priority to the promotion of the classical arts through various measures, initiatives and funding’ (Parsai, The Hindu- Dec 9, 2010).  Here, I attempt to enter this debate, on a slightly tangential note, to consider and reflect over the language used to speak of this ‘endangered’ genre of performance in contemporary English language print media. The theoretical approach employed, is varied, but is chiefly inspired by Anne Salmond’s piece in Semantic Anthropology (Salmond 1982) where she probes intensely the metaphors used to refer to knowledge in the English language by giving examples from a number of anthropological texts and how they bring forth ideas of knowledge being thought of spatially and often as a contested ground, much like on a real battlefield. Why this is interesting of course is because it provides a great opportunity to examine assumptions built seemingly innocuously into language and to ponder on the results that may hence arise. I am only illustrating a few of these metaphoric uses for this version, the original text is more detailed.

A story headlined ‘ A New Symphony’ appeared in The Telegraph’s (Kolkata) cover story in its Sunday magazine ‘Graffiti’ (Biswas, Telegraph-Graffiti, Dec. 5, 2010) featuring popular Hindustani classical musicians in their 20s and 30s for their take on being young classical musicians in contemporary India. Further, the piece examines in detail the debates for and against ‘fusion music’ as the way forward. Throughout the piece, there are many references to this notion of classical music and the youth being at opposite ends of the spectrum and the effort that needs to be made to bring them closer.  Sitarist Purbayan Chatterjee quips that “The idea is to make Indian classical music accessible to today’s mobile-toting youngsters.  It will be an alternative to all-consuming Bollywood music.”  Chatterjee further clarifies that the need of the   hour   ‘in   an   age   when   cross-cultural   music is   the   buzzword, these classical instrumentalists are expanding their soundscape by making Indian classical music more contemporary. The idea is to reach out to youngsters in nightclubs and independent music festivals so that they are aware of the possibilities of Indian classical music.’ Interesting peculiarities emerge. By implication, the ‘purist’ and ‘youngster’ are two incommensurable categories continuing to posit that not only is being young and interested in classical music a tenuous connection, the only way the two can come together is via a bridge which must include a ‘change’ within the form of the genre itself. So the act of owning a mobile phone is automatically associated only with the ‘youth’ and puzzlingly, pegged as a natural adversary to enjoying classical music. Several other examples illustrate this tendency (Bhirani, IANS, March 4, 2012; Varma, TimeOut Delhi-August 17, 2012 to quote a few) where classical music is depicted as something which needs this process of ‘making relevant’ to the youth by making some changes to it. This is somewhat bizarre of course in light of much literature to suggest how fluid the repertoire of the kind of music known today as Hindustani classical music has been over the years. (Pradhan 2004: 339-340 among others). So in this sense, a ‘new touch’ is neither new nor unusual. In fact given that this body of music has always been dynamic, it is difficult to pin down an original ‘sound of classical music’ itself (Raja 2005)

The young musician and his roots

Another common term of reference to Indian classical music is through its association with ‘tradition’. Again, attempting to draw out a few examples, we can see how often the word ‘root’ or ‘rooted’ is used when referring to this genre of music  and  the  ideal  Hindustani  classical  musician  as  well.  Tabla  maestro  Ustad  Zakir Hussain, says in an interview that though  classical music is not static, it is important to ‘preserve our original roots’ (Banerjee, The Hindu Friday Review- March 6, 2009). This points to  a curious tension that seems to exist within classical music where there is a pressure to continue to constantly be seen as adhering to a ‘tradition’ which clearly cannot be done away with for purposes of lending ‘authenticity’ to it while at the same time having to  be  seen  to  tread  a  ‘new  path’.  However, this  process  is  constantly  imagined  as  a continuum with a traditional form of classical music at one end and ‘new path’ on the other while a contemporary classical musician is placed on this continuum. If the musician is keen to be seen as a part of the process of making this genre ‘relevant’ he/she needs to necessarily continue to be pulled towards the ‘traditional’ end as a base while attempting to stretch towards the other end in order to be seen as contemporary. Almost unfailingly, this position is seen to hold, with little variation and rarely inverted.

Portraying Indian classical music as the antithesis of ‘contemporary’ has been repeatedly challenged in academia, a debate that seems to have escaped most media representations on the subject. The debate that has found active expression in academia regarding the contested antiquity of what is referred to as ‘Indian classical music’ itself today has been largely ignored in the press which makes the drawing up of this continuum seem flawed. On this debate, Garrett Field writes that while a group of twenty-first century scholars like Weidman and Subramanian ceased  to  see ‘modern’ Indian classical music ‘through the lens of culture and tradition and started to view it as a product of nationalism, modernity and colonialism whereas others like Dan Neuman and Jon B Higgins portrayed the  music  as  an  evolving ancient tradition  adapting  to the threat  of modernity’  (Field 2010:1). Higgins wrote that “Far from being the enemy of tradition, change has been rather the core, the soul of a vital art form constantly in the process of becoming. Over the past two thousand years and more, every new generation has received the oral corpus of musical repertoire and style, transformed it and in turn transmitted it to the next generation. So far as we know the tradition has undergone a constant process of evolution” (Higgins 1976:20). Though as Field points out, Higgins (1976) and Neuman (1980) offer a rather different viewpoint from Weidman (2006) and Subramaniam (2006) who argue that the idea of Indian classical music in contemporary contexts being a direct descendant of the Vedic chants (often spoken of as the beginning of Indian music) corresponds ‘with nationalist histories of the Indian nation that anachronistically projected the present nation-state back in time, and construed the past as evolving towards the present nation-state’. (Field 2010:3, Kobayashi 1995: 151-153 cited in Field 2010).  This idea has also been challenged by VN Bhatkande, a key  figure  in  20th    century  Hindustani  classical  music  and  its  classicisation  (Bor  et  al 2010:16, Dennen 2010). Also, while Neuman and Higgins suggest that the Hindustani music tradition has learnt to survive the ‘threat of modernity’ while Weidman and Subramanian speak of it being ‘reinvented by modernity’. Either ways, this contest with modernity is hardly presented fairly in most of the press reports presented, where the idea seems placed only in present times and more importantly, as an external process.

The metaphoric articulations of various aspects of Indian classical music in the press seem to disarticulate a number of contrary elements that have also formed a part of the discourse around   this genre of music.  It could be argues that these media representations are perhaps trying to create a picture of classical music as an object which invites action, i.e to refer to it as a gerundive (Burke 1941). But none of this is recent nor limited to contemporary India, in fact it has been a part of the trajectory of the discourse surrounding Hindustani classical music for much of the 20th   century. Prof. Daniel Neuman speaks at the annual conference organized by the ITC-SRA in Mumbai of this tendency to perpetually portray ‘classical’ or ‘traditional’ art forms in a critical state to constantly invite some kind of preservationist action on them when he refers to the US media who ‘have been predicting the demise of symphony orchestras for about a hundred years. It is always dying but never dead’! (Gokhale 2011c: 24). The binding of the notion of duty towards preservation of the classical arts that was rife in the contents of the discussion this conference on music actually runs through from early 20th century writing on South Indian classical music for instance.  Lakshmi Subramanian quotes a newspaper article from the 1920s which says, “Is it not the duty of every lover of Karnataki (Carnatic) music to strive to rescue it from its present neglected state and to develop it on the right lines so as to preserve ancient Indian music and preserve it for all posterity?  (Subramanian 2006:78 cited in Dennen 2010:162)

The same kind of zeal to protect this genre of music seems to extend into press reportage and discourse even a century later. Of course, the context in which this preservationist mantra exists has changed  immensely.  While in the context of the nationalist  movement,  this discourse served the purpose of creating a shared sense of belonging in a new and diverse nation (insert refs), in present times the value of a venerated ‘tradition’ of classical music could be read in the context of Partha  Chatterjee’s idea of ‘inner domain’ that he says precedes a process of nationalism becoming political where nationalists attempt to create a special space such as artistic heritage or a common native language. While Weidman (2006) and Subramanian (2006) refer to this idea when they write  of the efforts to classicise the repertoire of South Indian art music, Chatterjee’s contention could  also be viewed in the context  of  globalisation  and  the  aggressive  marketing  of  India  as  a  to-be  economic superpower that has largely dominated mainstream media for the past decade  insert some news ref) where it becomes important to ‘demarcate a distinct domain of  sovereignty’ (Subramanian 2006:17)

Chatterjee  believed  the  “inner  domain”  served  to  reinforce  the  difference  between  the colonisers and the colonised and hence lend legitimacy to the freedom struggle. This could be mapped onto present times when the rampant commercialisation in India inspires the need for this kind of ‘inner domain’ in contrast to the ‘outer domain’ or a material sphere of economy, statecraft, science and technology in which the West was supposed to have supremacy (Chatterjee 1993:26). Weidman supports this as well, albeit with reference to Carnatic music, when she writes, “the more the music business flourished, the more the figure of Thyagaraja as a musician existing outside of and even resisting) the money economy was celebrated”(Weidman 2006:100).

This music then seems to be in a constant process of becoming, given that it is spoken of through  metaphors, devices for seeing something in terms of something else, forever spoken in terms of a thisnessof a that, or a thatness of a this (Burke 1941:503). The unease is visible when classical music becomes newsworthy only under certain conditions i.e being traditional and hence serving the purpose of Partha Chatterjee’s ‘inner domain’, of becoming ‘relevant’ in contemporary times and so on. The crux is the utter contradiction that emerges in the role that this music is seen to play, that of having to be inward and outward at the same time, much like the contemporary classical  musician on the continuum between being ‘rooted’ to tradition and at the same time, comfortable with change, albeit a narrowly defined  sense  of  the  word.