Prathyush on Camus, Kabir Singh and Kama Sutra: film criticism and the internet 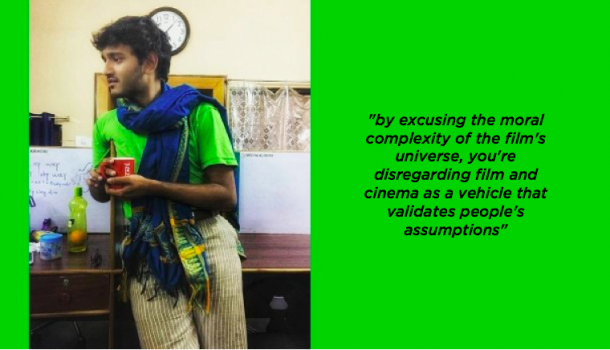 Last week, for the second session in our Leadership Programme masterclass series, we hosted film critic Prathyush Parasuraman from Film Companion to talk to all of us about why he became a writer, questions that the community of film critics is grappling with and the new forms sex, censorship and certification take in the era of streaming content. The talk was titled Camus, Kabir Singh and Kama Sutra.

Prathyush has always written with a keen interest in aesthetics - in beauty. He tells us that he came to be a writer through the combination of his love for Saawariya and Dostoevsky’s White Nights, and - as is characteristic of the past decade - opportunities that opened up on Instagram and Twitter. His foot-in-the-door with the website Film Companion happened though an online submission of his review of the film Kalank. And since no story is complete without conflict - he tells us about Camus’ The Stranger and the realisation of a fear – that of living a life without conviction. This caused a philosophical rift with his career in developmental economics, and set him on the path to Mumbai; to becoming a writer.

Prathyush began the session by setting the context for what it means to write for the internet today. He introduced the concept of opportunity cost - the idea that there’s always something better to do, watch, or read, and by choosing something, we’re invariably missing out on something else. This cost is increasingly starting to shape the digital economy of choice on the internet.

And in the middle of all of this, writing on the internet enters a frenzied age - for every article you click on in your Twitter feed, you’re missing out on several others that you didn’t click on, and that opportunity cost is felt more palatably. So to get someone to click on the article you’ve written, you have to make it sound exciting at the outset - but also have the content of the article retain that attention. This way, the opportunity cost stings a little less when you’re reading it. Ideally, you’d want someone to feel like they wouldn’t have spent their time in any other way.

Prathyush explains that this too, however, has a story of excess - disingenuous writing, clickbaity headlines. He adds that while many writers find headlines reductive or a distortion - this comes from thinking that writers are in the business of information. He says, writers are now more than ever in the business of attention - capturing it, and enduring in that attention. And while this might seem to be in line with the internet zeitgeist, he adds that it’s important to not mistake an arresting headline for a flippant one. At some point in our lives as writers, we’ll all attempt a ‘clickbait’ - because we’re curious about how people will respond to it and interact with it.

As for writing style, he takes us through the art of a good sentence (concise, descriptive, but with not enough closure that you don’t want to read the next), how he’s experimenting with an impactful last sentence instead of the traditional strong first sentence (hoping that everyone sticks around till then), and how he inserts his readers right in the middle of the action (of the show or film) at the beginning of the review.

He also talks about finding a balance between moulding your own form and knowing where you’re fumbling. While the traditional critic is horrified by not mentioning the film or show’s title in the piece, Prathyush feels there’s no need for it if it’s in the article title or description already. But he looks back on older work and sees run-on sentences, unnecessary parentheses (with run-on sentences in them) and is happy for the growth and change in style, since.

Citing thoughtful taco reviews and critics who write about OnlyFans accounts - Prathyush talks about his love for criticism as it is today - a curious and careful engagement with popular culture. This brings him to the MAMI Mumbai Film Festival Young Critics Lab last year, which he was a part of.

The film of the moment was Kabir Singh - and the moral questions it posed as an object of critique. The main point of contention was - when you’re reviewing a film, should you take into consideration the film’s moral compass, or your own? Within this question was a deeper question - when you’re reviewing a film, should you bother about its politics or should you merely comment on its craft? Prathyush says that critics cannot merely comment on craft - because then we will excuse any and all conflicts in the moral complexity of the film’s universe.

By ignoring the connections that Kabir Singh makes between sexual assault and heroism - we’re disregarding film and cinema as a vehicle that validates people's assumptions. Criticism has to be a meditation on craft and ethics. The problematics of a film need to be cited and contextualised so that they are also a part of the larger narrative about the film.

We also discussed the #MeToo movement - how do you write about a director who has been accused? Should you look at a work of art differently if an abuser has made it? Prathyush discusses some complexities that present themselves when we resort to cancel culture - a film is a product of many persons’ effort and labour, and not all those individuals have the luxury of a moral stance - to choose not to work with certain people. And so in talking about bad people, and bad art, how we contextualise the art itself is important. And while aesthetics and ethics are a constant balancing act in making art and writing about art, it’s important to write about an artist’s implication in the #MeToo movement while writing about their art, because the morality of the ‘creative genius’ can and should be challenged, despite genius, despite creativity.

Next, Prathyush discusses one of the pre readings for the session - his review of the ALT Balaji series Gandii Baat for Film Companion.

He begins by touching upon how streaming and OTT platforms have changed our viewing habits - the theater is different from streaming because the theater is a physical space, it's a rival good. So like a palimpsest — for a film to run — the previous film needs to be removed in a theater. Two films can’t run simultaneously at the same theater. With streaming, you can have a sex series and a family-based series on the same platform. You don't need to erase one to have the other. The ‘cost’ here is relatively less.

Gandii Baat first came into his cultural radar when his editor asked him to write a piece about it. Its wide reach and the mind boggling numbers of comments and likes and IMDB ratings led him to think of sex as its own genre. We’ve always seen sex as horrex or sex-comedy - a sort of hyphenated identity.

Shows like Gandii Baat and Mastram - Prathyush says, require thinking about sex as a genre and not just as a subset of a genre. Because in those shows, sex is not the means, it’s the end. In a Four More Shots, Please!, in a Sacred Games, in a Made in Heaven, even, sex is a means to an end, it’s a way to make the story move forward - towards its end. Whatever that end is - it could be liberation, it could be love, it can be victory. But in Gandii Baat and Mastram, the role of the non-sexual scenes is to lead up to that sexual scene. If you take all the sex out of it, the story just cannot stand on its own, because there’s no alternative to it.

Prathyush says that while there are formulaic constructs applied to this such as ‘sex sells’ - it is also true that it catches eyeballs, and keeps viewers gratified. But it isn’t enough to write off streaming because of the 20 minute soft porn formula that companies work with. Engaging with it provides far richer insights - especially the ‘threats’ perceived by this content online, with a digital censor board being set up in this year. Prathyush talked about how the online traction that sexual content generates has led to new digital formats - so what do we mean by ‘sex sells’? Ram Gopal Verma used the pay per view format for his film Climax and Anveshi Jain from Gandii Baat, one of the most Googled people in the country, now has her own app on which she she interacts with thousands of fans.

Prathyush ends by talking about how his interest in economics and writing intersect in this sphere. The economic creative destruction that sex brings about online tells a story - of viewership, of aesthetics, of form and of content. And this is a story that involves numbers as well - viewer counts and subscribers being ways of imagining and engaging with publics. And as storytelling changes, so will criticism - with our major ideological battles being fought in comment sections.