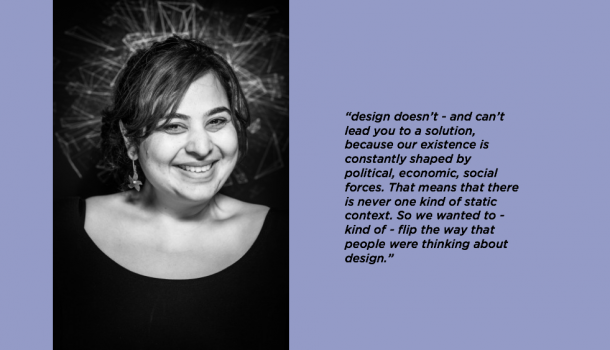 Padmini Ray Murray held a class with us that took us through her paradigm of ‘design thinking’. She’s a consultant researcher and creative practitioner who founded Design Beku in 2018. It’s a collective that emerged from a desire to explore how technology and design can be more locally rooted, relevant, and ethical.

Studying the idea of embodiment is what led Padmini to design - the central question that informed her work was ‘what is the body’s relationship to space?’.

“We’re not brains in a jar or AI - therefore everything that we do and perceive is through our body.” This phenomenological approach to experiences has strongly influenced her feminist politics and the principles and values that inform her discipline.

Padmini then tells us about the beginnings of her relationship with the digital humanities - a fellowship with the 2013 Unbox Festival, during which she made a video game called Meghdoot. Meghdoot was about an evil cloud that was taking away the world’s stories - which functions as a metaphor for large, data-hungry technological corporations. It was a Kinect game, and its visual language and the ‘embodied’ nature of the challenges were heavily influenced by the kavad, storytelling in India, an exploration of what it meant to make an ‘Indian’ game and old Delhi, where the game was being made.

Here’s where digital humanities comes in - it expands humanities research using computational tools, increasing its scope by looking at it through the lens of technology, and also examining technology itself through humanist and social science modes.

She breaks it down in this way: ‘hack versus yak’ is a popular gateway to understanding the digital humanities. ‘Yak’ refers to talking about the humanities - for example, humanities scholarship reaches us (and has reached us, historically) in a very particular way - books, writing and often single-author work. But what the digital humanities offers is this idea of making or ‘hacking’ through humanities scholarship. How do you reify concepts that you’re talking about? Padmini offers the example of a meme - while it is a technological artefact, it can also be a mode of critique.

Meghdoot led Padmini to merging design and the humanities. She joined the Srishti Institute of Art, Design and Technology, where the pedagogy was exciting and interdisciplinary. Through her work in digital humanities and design along with her colleagues at Srishti - they realised they were zeroing in on a very specific philosophy for design. This was further strengthened in 2016 when a group of Global South scholars pushed back hard on the fact that design - as we know it - is a Western inheritance. It doesn’t take into account historical, material contexts of the rest of the world. Very tellingly, Padmini explains, the National Institute of Design’s (NID) founding document is the Eames report.  It’s written by Ray and Charles Eames - American designers who came to India and claimed that this was to be the manifesto for design practice in India, going forward. This controversy got Padmini thinking about what it means to do, teach, and politicise ‘Indian’ design.

The other consideration that she and her colleagues were navigating was that they were situated in Bangalore. In Bangalore, design was looked at as a way to access technology. Design, right now, is popularly instrumentalised as a means to access technology - this meant that it was being depoliticised by constantly being in service of technological corporations.

The turning point to founding Design Beku, she says, was the realisation that design students in the country were being taught that design should be solution oriented. And she felt differently - she said design doesn’t - and can’t lead you to a solution, because our existence is constantly shaped by political, economic, social forces - there is never one kind of static context.

So she wanted to flip the way that people were thinking about design, and to also rethink the role of the designer. She and her colleagues saw a lot of projects where people were being ‘helicopter-ed’ in to do design if they were funded by an organisation or to again solve a ‘wicked problem’. This ‘parachuting’ did a great disservice to the communities with whom these designers were working because in the worst case scenario, the solution wouldn't be sustainable once they left, and in the best case scenario, even if it made a difference to that community, how would they take that forward and build on it?

And so, closely aligned with the principles of The Design Justice Network, Design Beku was born. Conversations on accessibility, community-led design and non-exploitation in design were often occurring only in the academic space, and Design Beku began with the intent to have these conversations enter the design industry itself, thereby influencing the practice.

Padmini then spoke to us about her experience in academia, and what led to eventually leave Srishti. Being a feminist researcher, she grew increasingly uncomfortable with the fact that a lot of her work was about social justice and intersectionality in digital spaces, but she was benefitting from it without working in social justice. She explains that the academy is structured in that way - you write, you publish, you go to conferences, you deliver keynote lectures - and that becomes the end of your work. Even if you’re researching or writing about social justice, you’re often not doing social justice. The university itself is increasingly becoming a neoliberal space - it becomes difficult to enact social justice when bound by its constraints.

She refers to feminist researcher Sara Ahmed here - Sara Ahmed left the faculty at Goldsmiths, University of London, despite it championing issues of gender justice on paper because institutionally they were not addressing instances of sexual harassment from their own students. Here’s a quote from what Sara wrote about in a piece called Complaint and Survival, that Padmini read out to us:

I have been thinking about that: how sometimes we have to stop what we are doing to feel the true impact of something, to let our bodies experience that impact, the fury of an escalating injustice, a structure as well as an event; a history, an unfinished history.

Sometimes to sustain your commitments you stop what you are doing.

Padmini talks about her decision to leave the academy while discussing that a lot of ‘stopping’ has to do with how we’re affiliated with institutions, how they MAKE us. The Design Beku team strongly believed in not ossifying in the institutional modes we’ve become used to, but to be agile in how we think about our politics, and to constantly challenge the ways in which we practice it.

In this vein, she shows us a project about the Personal Data Protection Bill that Design Beku worked on and wrote about for The Economic and Political Weekly. It studied the role of the ‘interface’ of technology when it comes to determining the complex ways in which people interact with it, share information with it, and understand their rights. The article also had an amazing comic series by Paul Anthony from the Design Beku team - it was called ‘Dad and His Invisibility Mundu,' and it was in response to the end user license agreement that most people must consent to when they’re using technology. It explored the ethics of such ‘consent’ with an 8 year old character who spoke about his father’s supposed ‘invisibility mundu’ - his idea of being ‘off the grid’.

The Design Beku team strongly believes in reifying concepts that we take for granted - how we interact with design and technology, how aware we are of our own rights.

The session led to many questions from the class about academia, accessibility and the possibility of community-created resources that the internet offers. Of course, we also wanted to know a LOT more about video games. But that’s for another class!