On Creating a Feminist Internet with Smita Vanniyar

Blog » On Creating a Feminist Internet with Smita Vanniyar 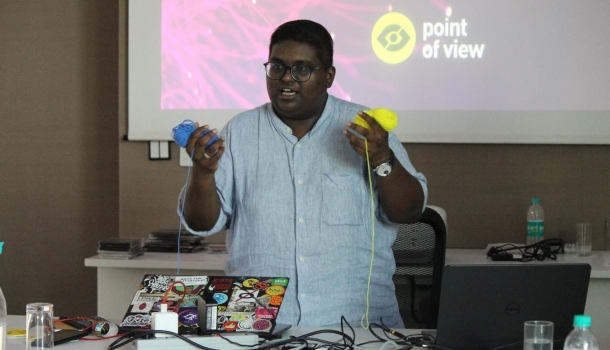 The India Culture Lab Fellows class of 2019 had the pleasure of meeting and learning from Smita Vanniyar of Point of View. Smita’s masterclass with us was on the interconnectedness of the offline and online worlds, the acute gendering of digital spaces and how the internet works as a space for dissent. Smita is a queer feminist and their areas of interest include gender, queer studies, internet, technology, popular culture, films, TV shows, and fandoms. Through their work at Point of View, a Mumbai-based non-profit, they are working on queer feminists perspectives on social, cultural and public domains through media, art and culture.

The session started with a small game where we were given two strings, blue and yellow and were each supposed to speak about an incident that they either read about or experienced recently and then categorize it into online, offline or both and then tie the respective string/s around our wrists. At the end of it, we had a huge web made out of the online and offline strings, which really drove home the fact that the offline and online are not as different as people tend to think.

Through the talk Smita asked some pertinent questions: The internet today, is more than just a tool, it’s a space in itself. But what kind of space has it become now? Who is online? Who is missing? Who speaks? Who is silent? Patriarchy and hatred have seeped its way to the corners of the internet as well. The number of people from marginalised populations going online is increasing. However, existing power structures have also moved into the digital space, along with the inequalities and violence that result from them. Digital rights are seen to be different than human rights, but are they really?

The internet has been dominated by straight, white, mostly upper-class, upper-caste, English-speaking men since its inception because most people making the internet also belong to this group.  Their dominance on the internet makes it harder for the internet to be an inclusive and ‘safe space’. Smita shared that the divide is deeper when it comes to examples of trolling: Men usually are trolled for their thoughts and ideas, while women are usually trolled about their body or appearance. This clear divide, makes the internet a very unsafe and sexist space.

Further, Smita spoke in the Indian context about access to the internet by sharing real life examples that we dismiss as being ‘normal’. One such example they shared was that in most Indian families it is always the father who gets the first phone in the house and the mother or the women are given hand-me-downs and are usually the last ones to get internet connectivity. This speaks to the gender divide in access.

This fresh perspective on the internet had our minds buzzing with questions about how to improve access and internet safety. Smita also shared how activists, NGOs and individuals are using the internet as a tool of dissent.  They talked about the rise of the many subcultures and subversions in online culture now. Their talk gave us hope for these movements leading to a better, more inclusive culture online, which could eventually bleed into the offline world.

At the end of the session, Smita shared some useful resources created by the very people they mentioned during their talk. They closed the session with a special treat- a set of feminist stickers that we could put up on our laptops (as a charm) to prevent the sexism and homophobia from penetrating our digital spaces!