Networking in the cultural industry

Blog » Networking in the cultural industry 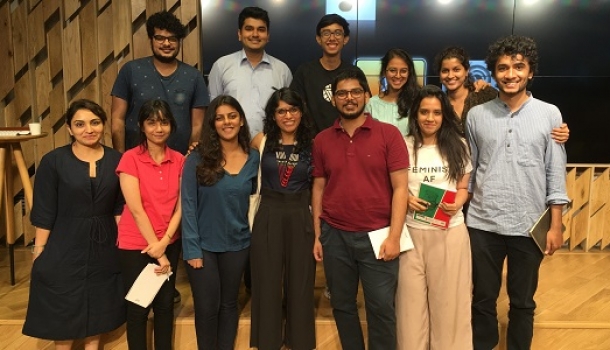 It was our second trip as Leadership Programme fellows and the event was based on networking. I soon realized that two cups of coffee in the morning wasn’t a terribly good idea, if I wanted to remain still for much longer than thirty seconds. In the cab ride over, us fellows had an illuminating discussion on the exhibits. As luck would have it, we caught a glimpse of Rashmi at the entrance of the building. I remember feeling awestruck through most of the elevator ride to the 19th floor. My hometown Rishikesh doesn’t exactly have skyscrapers dotting its skyline. “Rise Mumbai”, said the door that greeted us. Dianne from the Culture Lab team signed us in while we fooled around with a Newton’s Cradle that was on the table.

Rashmi entered not long after and began her talk. I, for one, expected a conventional speech, with little to no interaction between her and the crowd. To my  pleasant surprise, Rashmi began her speech by asking us to introduce ourselves. She followed up with the state of art and culture in Mumbai. The purpose of the talk, she said, was to answer a question: What does it mean to be part of a network?

Rashmi went on to explain the various roles in a network, and how to go about establishing oneself in the role of choice. To give us a relatable example (or rather, one to aspire towards), Rashmi finally introduced herself with all the bells and whistle - journalist, communications marketer, project designer, founder of The Art X Company. Her company operates at the intersection of arts and access, and uses curation, cultural production, and arts research to fulfil its aims. It generates value in art by increasing accessibility, researching extensively into culture, and encouraging the development of an audience for arts organisations. The Arts and Culture Opportunities, Residencies, Workshops, Jobs in India aka ACRI Facebook group was the next point of discussion. ACRI provides creative industry opportunities to those inclined toward the arts.

It wasn’t a one-way street of communication, either. Rashmi frequently posed questions, keeping the audience on its toes, engaged.  “What does it take to build a community?”, she asked. “What does it take to sustain one?”. If I were to venture a guess, regular participation of the members of the community is paramount for the sustenance of a community. Prior to that, however, members must exist for the community to exist. A community is formed when like-minded individuals gather to discuss their common interest(s).

Coming back to the topic, we learned that there exist two types of networks: Conscious and Subconscious. There are also facets, or dimensions to networks. Culture and Social domain, Impact on work, and the nature of the sector. For art to become a part of culture, it needs the support of a community. No lone, unsupported art ever becomes a part of culture. Often, however, the art becomes a part of culture long after its creation; possibly even after the death of the creator.

Several factors affect the production of art, the foremost of which is space. Art installations often require large amounts of space. Public spaces are unavailable for such installations, and private galleries are unaffordable for upcoming artists. That brings us to the second factor: money. The aforementioned upcoming artists are, more often than not, broke. If the art doesn’t sell, well, let’s not think about that. The third factor: training. Not everyone is an artist. I, for one, struggle to draw straight lines, even with a ruler. While I may have exaggerated my pitiful scenario, I believe that a good artist can come from anywhere. Identifying and training potential artists is of great importance, if the community and culture is to survive. The fourth factor: power centres. Observing the pattern of the last few centuries, there are strongholds of art formed in certain cities. Being in these cities brings budding artists in touch with a larger, like-minded community. This may just be the boost required to make the difference between known and unknown art.

Networking creates co-ordination and the sharing of knowledge, both codified and tacit. Lone wolves learn and share far, far less. The material benefits aside, networking creates an excuse for social interaction. This interaction leads to positive interdependence between the members of the network. This interdependence establishes trust systems in the network. Such trust systems are the ones that lead to the formation of a knowledge community. This transition between a network and a community is crucial, for the formation of a community cements that knowledge or art into the halls of culture. Building a network is simply building a community, a group of people who have a common interest(s). These individuals continually inspire us, and can be relied upon to support culture.

Rashmi also conducted a couple of fun little team exercises. I loved the one where she asked us to think of our own personal networks and map it. The task, I felt, was complex. It is indescribably hard to differentiate between a personal network and an external one. Connecting with new individuals allows us access to their own network as well. These are the multiple layers to network - one you are directly in touch with and the other being through someone. I felt was extremely difficult to capture this complexity of networks on a two-dimensional map. To get around to mapping this personal network, Rashmi mentioned critical principles. This is the foundation of any personal network. The first foundation: empathy. For networks to blossom into communities, it is essential for the participating individuals to maintain an empathetic link with one another. The second pillar: honesty. Need I say more? The third pillar: giving back. An obvious foundation. One must not only receive, but give back. This promotes a healthy atmosphere of sharing in the network, further helping it turn into a community.

As for homework, Rashmi suggested pairing up to interact better. One condition was imposed: our partner had to be someone we had not connected well with since joining the programme. After the talk, networking began. Colour tags were distributed amongst the members of the audience and people with the same-coloured tags spent a good half-hour discussing various topics. To speak of my own experience, interaction among the audience increased exponentially with time. Initial interaction did not create ripples. A few well-timed icebreakers, however, and everybody let down their guard a fraction. I am considered by society to be ‘an introvert’. Truth be told, I prefer Netflix over a movie theatre trip with friends. I am not alone, though. Several individuals have trouble starting conversations. Such exercises, in my opinion, are a great aid to overcoming this fear of public speaking, if you will. As soon as the tension disappeared, everyone relaxed and true interaction occurred. I steeled myself and forged in, guns blazing. I managed to maintain eye-contact for longer than three seconds, a personal best.

After the last exercise, I was far more confident, going so far as to actually initiate conversation with other members of the audience. Trust me, it gets easier with practice. One topic of discussion was our upcoming event on Urdu Culture Now. We spread the word, like a good set of messengers. The passion every member carried for the event, and effort put into making it a reality shone through in these promotional conversations. I was happy to note considerable enthusiastic feedback from the members of the audience, and am confident the event will be a success.

Sharing experiences we’ve had in life is truly the best way to bond. We learned of bigwigs in the industry and made acquaintances that will prove, I’m sure, very valuable in the future. I suspect my tough ‘introvert’ shell has been broken, to some extent. All of it would be wishing for too much, I suppose. The possibilities are endless, as I now see. Huh, well, I guess I’ve built up my first network, well, consciously I mean.