Migration Museum: On Home and Identity 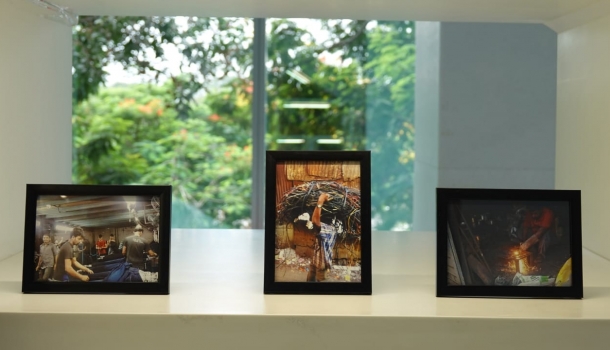 When communities or people migrate, they carry with them a treasure trove of memories and traditions. These form an inseparable part of their lives as they continue in their effort to adapt and assimilate into a new place and culture. Migration Museum tells the story of a constant struggle to come to terms with the separation from loved ones and their homes.

On the move: Memories of migration with the Navganis of Phadalewadi 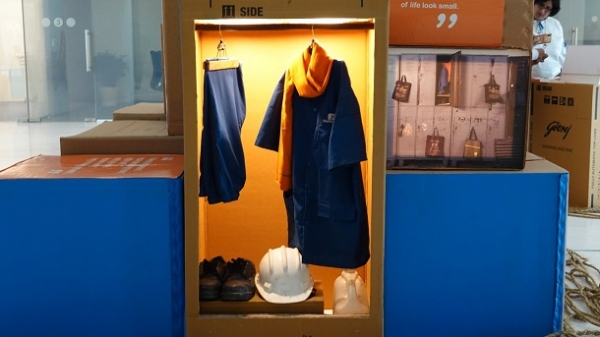 About 200 km away from Mumbai, Phadalewadi is a small village nestled in the Sahyadri Hills. Inhabitants of this village have had a long association with Godrej Industries with generations of workmen, specialising in lifting and moving heavy objects, migrating to the city to work at the company, transporting and moving heavy safes with their distinct techniques.

Living far from their homes and families, the Navganis have shared a special bond with the company. Their traditions, work culture and memories — all form a story worth telling. Presented by the Godrej Archives, 'On the Move' is a tribute to the Navganis’ tireless contribution and their invaluable legacy.

The Navganis’ stories was articulated through an installation complimented by a  series of songs, ballads and pieces of music which were played at the museum. 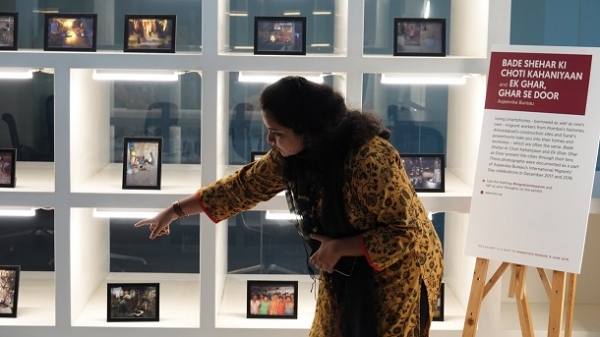 Using smartphones, labour migrants from Mumbai’s factories, Ahmedabad’s construction sites, and Surat’s power looms, take you into their homes and worksites, often the same, as they see and live it.

Aajeevika Bureau’s photo series titled Bade Shehar ki Choti Kahaniyaan and Ek Ghar, Ghar se Door narrate the story of the lives of the 140 million migrant labourers who migrate to cities to power India’s development blitz. The images recount a poignant tale of waking up every day to the same harsh reality of living and working in dangerous — often inhumane conditions — without losing hope of a better future.

Situated in the country’s western corridor, Aajeevika Bureau is a not-for-profit initiative that works towards improving the lives of migrant communities across India. 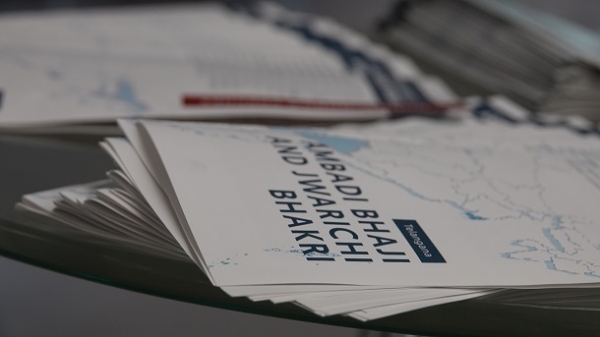 Visitors to the #MigrationMuseum were treated to sumptuous delicacies prepared from the traditional recipes of migrant women. Ambadi Bhaji — a stew made with sorrel leaves; eaten with Jowar Bhakri — an Indian bread made of sorghum wheat was served at lunch to provide visitors with a taste of the daily lives of the migrant labourers. Patishapta, a rice flour crepe stuffed with sweet coconut, was an attraction .

These traditional recipes are compiled in an e-book titled ‘Food memories of Migrant Women’, by Mumbai Mobile Creches (MMC). After having left their homes and families to work as labourers in construction sites in cities, these recipes are, at times, the only links that these women have to their roots. With the e-book, MMC brings to life these food memories and captures their wonderful, culinary heritage.

Monica Laxman and Vrishali Pispati from Mumbai Mobile Creches took the stage to talk about the ebook. Monica spoke about her dish - Ambadi Bhaji and Jowar Bhakri - and her fond memories of Telangana. The recipes were available as take-aways for the audience as well.

MMC is a four-decade-old non-profit organisation catering to the needs of children of migrant labourers living on construction sites by running on-site primary day-care centres for them. 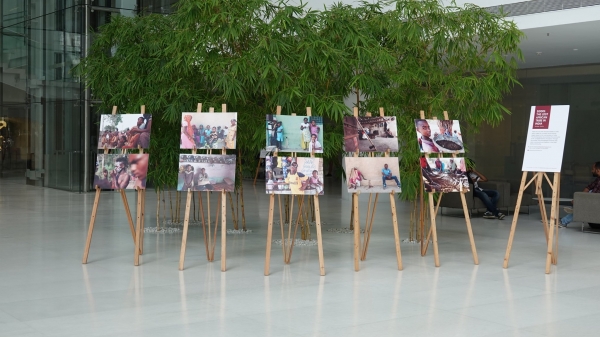 In his photo-series on the Siddi community of Gujarat, photojournalist Sanjay Austa has captured the essence of their life. The Siddi community is a racial minority in India of African descent who were brought to the western coast of India approximately 500 years ago as indentured slave labour.

A majority of their population is based in Junagadh, Gujarat. However, even today, their biggest challenge remains racial discrimination. 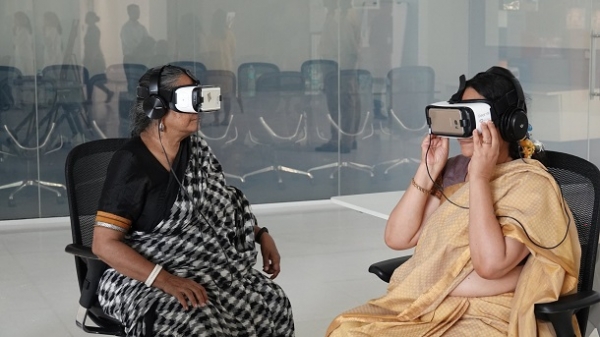 Both these films were virtual reality exhibits at Migration Museum. ‘SUBMERGED’ follows the disastrous flooding in Bihar that is a result of state infrastructure projects. Environmental disasters are disrupting livelihoods in India and is one of the factors responsbile for the large-scale exodus of migrant labour in India. ‘A portrait of a village on the border’ delves into the complexities of national identity in a town fractured by war on the India-Pakistan border.

Letters from Arakan by Adib Chowdhury 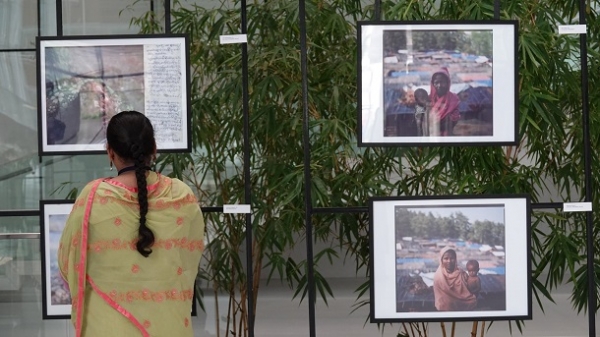 Letters from Arakan recounts the horror stories of the Rohingya refugees who were driven out from their homeland as the State refused to recognise them as one of their own.

Journalist Adib Choudhary presents a collection of survivor testimonies of the suffering and hardship faced by the Rohingya refugees along the Bangladesh-Burma border. Through portraits, handwritten letters, audio recordings, and a series of images, he provides an intimate portrayal of the lives of those fleeing State-sponsored violence in Rakhine state (also known as Arakan), in Myanmar. It is a heart-wrenching narration of their escape from death and destruction. 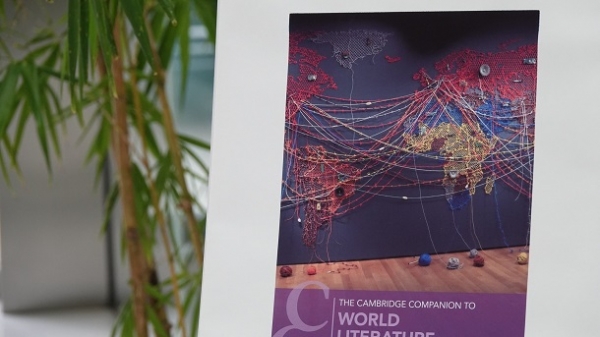 Many books, written by authorities on migration, have used pictorial adaptations of Reena Saini Kallat’s ‘Woven Chronicle’ as book covers. A selected compilation of these book covers were on display at the #Migration Museum.

‘Woven Chronicle’ by Reena Saini Kallat comprises of electrical cables woven across an illustration of a map. The wires resemble threads from a yarn spun in a web-like formation. The illustration alludes to people migrating across lands and cultures in search of prosperity, happiness or just survival during various times in our history, including the industrial revolution, seasonal migration in agricultural societies, and civil conflicts. It symbolises the entwining of humanity through socio-economic and cultural changes brought about by the flows and movements of travellers, migrants, and labour across the world.