Blog » Looking back at #RememberingPartition

I remember the first time I heard about Remembering Partition in its most nascent stages, barely more than an idea at the time. It immediately sparked my interest, which is unsurprising as I am a passionate student of history. The power of memory in crafting identity is something I have always been convinced of, and a tribute to the memory of Partition seemed like a brilliant idea. This idea was to grow into an event of proportions I could have never imagined, not just in terms of scale, reach and diversity, but also in terms of emotional power. The Museum of Memories: Remembering Partition was a three-day emotional rollercoaster I am so proud to have helped out with, and is an experience I will never forget. To be part of the process of building a museum has always been a dream of mine, and I am still in disbelief that I got to see that dream realized! 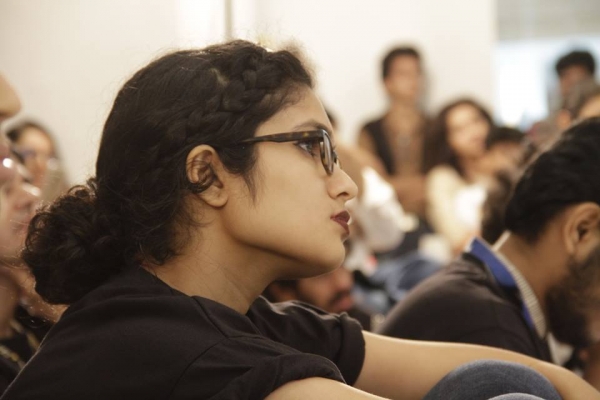 Poorvi Bellur at one of the auditorium sessions at Remembering Partition.

The months leading up to August 4 were full of phone calls to incredible artists, activists and peacemakers across the country and even across the border.
Putting together the exhibits was a gargantuan task, as we were coordinating twelve separate exhibits spread across the Godrej One campus. My personal favourite was the Well of Remembrance, a grand installation right in the middle of the atrium. The imposing brick well had been created to convey the illusion of bottomlessness, a striking image amplified by the seemingly endless saari streaming towards the well from the high ceiling. When I stood before the well on the eve of our museum, my heart ached for the women who were forced to seek death in wells to escape the rape and mutilation of Partition. 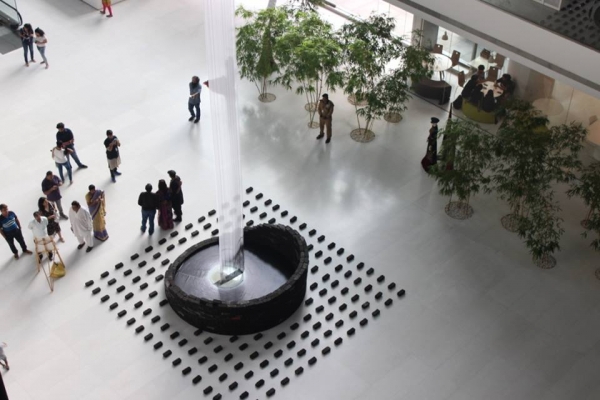 The Well of Rememberance created by the GCPL Design Lab and The Partition Museum, Amritsar

Another wonderful exhibit was the Museum of Objects, an installation I was personally involved with creating. I got to interview families affected by Partition and pen the stories behind these seemingly ordinary objects, each with their own extraordinary tale of loss and resilience. 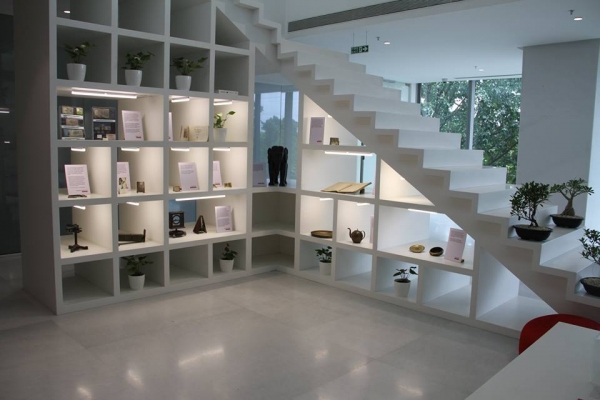 The Participative Museum of Objects.

Before we knew it, the Culture Lab team and an entire host of the most enthusiastic college volunteers were decked out in matching shirts, waiting to open the floodgates to over 1000 visitors: the Museum of Memories was finally underway. As we looked around at the smiling faces of visitors clutching their foldable maps and roaming the museum, we knew we had created something special.

Each auditorium session was a full house!

While the exhibits conveyed the complexity of Partition in the most artistic of ways, the real magic took place in the auditorium of the Godrej One campus. Over the three days, we witnessed several panels, screenings, performances and more, all of which were transformational in their power. As a history student, my most favourite panel was on Archiving Partition, which featured four incredible women and the work they are doing to capture stories of Partition from a fading generation. I was especially inspired by Aanchal Malhotra, a young historian whose new book is about to be released. She spoke about the stories hidden in tangible material objects, memories you can hold in your hands, a sort of “belonging through belongings”. This resonated with me strongly as my journey to create the Museum of Objects taught me that the most day to day objects have stories to tell. 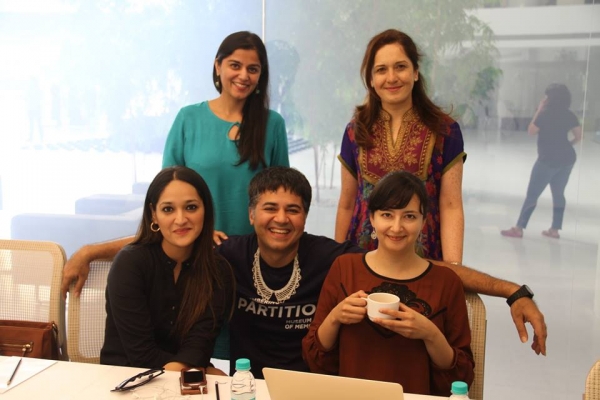 One experience I will never, ever forget is Voices of Partition, a presentation created by the 1947 Partition archive. The audience was dead silent as they faced three Partition survivors, who narrated the horrors of what they had gone through. “They burned my entire village alive”, a man recounted, his voice catching on the lump of memories and heartbreak that had been lodged in his throat for 70 years. Right after this session, Soz Khwani artist Askari Naqvi performed the Awadhi songs of mourning, narrating through melancholic melody the story of Hussein and Karbala. 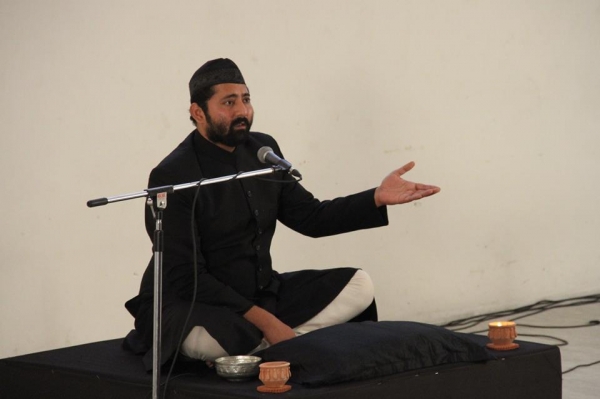 Despite the collective heartbreak we all experienced during these sessions, we left the museum with a sense of hope for the future. It was not a misguided hope, as proven by the sessions dedicated to the legacies of Partition and the relationships between South Asian countries today. On a panel dedicated to these legacies and how to move forward from the trauma of Partition, we heard creative voices like Nandita Das from India and Salima Hashmi from Pakistan come together to discuss the future of South Asian solidarity through their work. 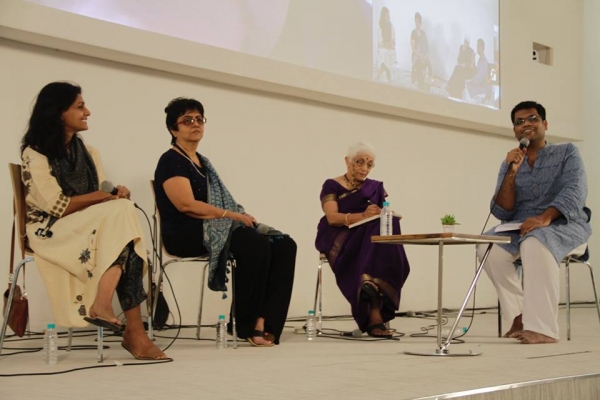 Left to right: Nandita Das, Saaz Aggarwal, Lalita Ramdas and Chintan Girish Modi were joined by Salima Hashmi on video conference for a panel discussing the legacies of Partition.

Another unforgettable moment was when we skyped in two time Oscar award winning filmmaker Sharmeen Obaid Chinoi, to talk about her latest project Home 1947, a reflection on the horrors of the South Asian past. Despite the melancholic tone of these films, the audience was not left hopeless. An undying optimism for the future came alive in the songs of Kabir Cafe, a fusion band that performs the verses of 15th century poet Kabir. As their lively music filled the auditorium, the audience was moved to get up from their seats and dance, the pure spirit of joy engulfing everyone present, young and old.

Museum of Memories: Remembering Partition came to a close, the exhibits were dismantled, the performers and speakers and audience went home. However for me, it is an experience that will live on in our minds and in our hearts. 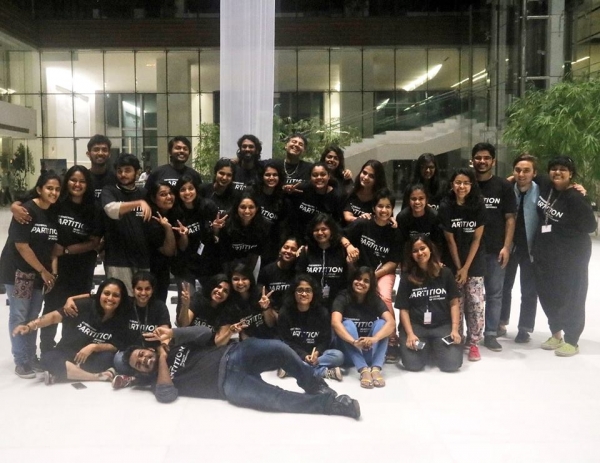 The team that made it all happen!