“I am a big fan of discomfort, it questions our privilege”: When Mona came over

Blog » “I am a big fan of discomfort, it questions our privilege”: When Mona came over 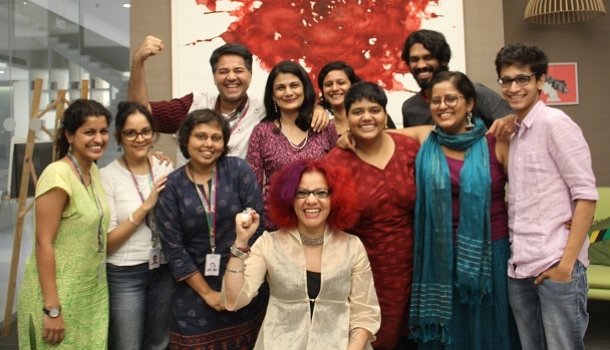 Mona Eltahawy and the gang

The day I completed my two power-packed months at the lab, was also the day we were rewarded with a memorable visit by Mona Eltahawy. An evening with the radical Egyptian-American feminist, journalist, political activist and the author of Headscarves and Hymens: Why the Middle East needs Sexual Revolution, triggered both my scholarly excitement and curiosity.

Breaking rigid formats and resisting regressive ideological positions is close to Mona’s form of political activism, and hence this adda session through its fluid engagement with feminism resonated meaningfully with us, and our friends whom we invited to chat with Mona.

Amongst the host of issues we discussed, what struck me the most was Mona’s use of powerful metaphors, around which Mona weaves her intricate poetics of feminism.

Metaphor No 1: The Trifecta
Mona, through several articles, tweets, book and conversations, has explicitly articulated her resistance against what she calls the ‘trifecta’. This trifecta represents the converging tyranny of the STATE, STREET and HOME. Mona locates herself as an Egyptian-American-Muslim woman who strongly resists this patriarchal symbol of misogyny.

Metaphor No 2: Headscarves and Hymens
Mona’s book has been critically reviewed by several feminist scholars. When I questioned her about the deliberate use of such layered metaphors, she stated that despite bearing the brunt of being labeled as an ‘orientalist’, she chose these metaphors over others because through her work she argues that both headscarves and hymens have been deeply politicized by religions, state and patriarchy. This has been further used to regulate and censor women, their bodies, gender, desires and sexualities.

Metaphor 3: The Face Veil
Mona had espoused a radical position on the banning of the face veil. She told us that the face veil represents a gamut of problematic issues to her. From the erasure of unique identities of women, to the veil representing a deeply patriarchal bias of Islam which ordains Muslim women to further desexualize themselves through a piece of clothing. Mona also drew a fine distinction between the face veil and the hijab. She does not demand the banning of hijabs, but definitely protests against the act of veiling the face, which is a deeply political act. Mona told us that “I wore the hijab for nine years and spent eight of them trying to take it off.” Thereby questioning the contested terrains of choice and agency through her profoundly personal and political experiences. She raises her voice against these knotty cultures of modesty and piety, which seldom leaves the Muslim women in Egypt with any choice of unveiling themselves.

Metaphor 4: Red hair, Tattoos and a Suit Case
Mona is a petite, scarlet and purple-haired diva, with an obsession for ethnic jewellery. When we discussed her peculiar sartorial choices she told us the stories and the significance of it. While her red hair symbolizes her feisty mark of protest against the act of veiling oneself, her multiple tattoos served as an act of both defiance and painful acknowledgement of her traumatic experiences as a political activist who was sexually assaulted in Cairo. These agonizing memories collide together within the metaphor of a suitcase that represents Mona’s battle with her several selves, through the journey of writing, political activism, feminism and life.

Our salon with Mona served as an intellectually stimulating conversation. It was a feast of opinions and disagreements, which explored themes like marketing feminism to identity politics. We talked about complicated theories of choice and agency to the Bio-politics of it. We discussed about the popular portrayal of desexualized feminists to hyper nationalism across the globe, from the historical struggles of four waves of feminism to our daily personal instances of defiance and resistance against bigotry.

Towards the end of this beautiful evening Mona stated that Feminism is all about equality and liberation to her. Liberation from both patriarchy and its rigid notions of masculinity and femininity. By quoting Audre Lorde “Caring for myself is not self-indulgence, it is self-preservation, and that is an act of political warfare”, Mona reiterated the importance of taking care of one’s own self. As a research scholar and a feminist, Mona’s talk inspired me to question every single thing around us, to actively participate in struggles that challenge and resist misogyny, and to take good care of myself, which in itself is a deeply political act of resistance. This intimate salon with Mona was an engaging experience for me at the Lab.