From The Oldest Museum To Modern Alternative Art Spaces In The City: What Feeds Them?

Blog » From The Oldest Museum To Modern Alternative Art Spaces In The City: What Feeds Them? 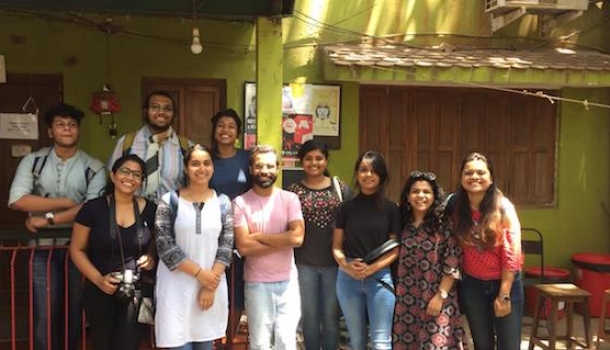 Dr. Bhau Daji Lad Museum, formerly known as the Victoria and Albert Museum is one of the oldest public institution in the city. With a modest collection that started more than a century ago in 1854, the museum boasts of a grand collection today and is located at Byculla where it moved to in 1862. The space opened to the public in 1872 and underwent massive restoration after 2003 when the Municipal Corporation of Greater Mumbai joined hands for the project with two private organisations—the Jamnalal Bajaj Trust and INTACH. Since the museum reopened in 2008, it has become a must-visit place for people who live in the city and tourists alike.

The story behind The Castiko Space in Aaram Nagar is a uniquely intriguing one. Founder Shiv Tandan tells us that he started looking for a space with the sole aim of improving research and productivity of his mobile application—Castiko, an online forum for actors to audition in front of casting directors with the hustle of standing in line for the same eliminated. Tandan built the app not only to ease the process of auditioning for aspiring actors, but also to relieve the casting companies of their burden. While earlier the hiring company had to manually rename each take and version of every audition they took—a tedious task that consumed a good two hours of activity each day, the app now relieves them of this burden. Thus, when Tandan moved into the bungalow that now houses performances and also doubles as a co-working office, he had no idea of what was in store for him! Today, the presentation space called ‘The Play Shed’ is rented out to artists for various purposes from rehearsals to shows and also becomes a workshop area when required.

A few minutes from Castiko is Harkat, the first independent art space in the city which welcomes all performers with open arms. Established as a stage for artists to showcase their work and pieces, the studio guarantees an intimate experience where the wall between the players and the viewers is demolished. Growing up, curator and co-founder Karan Talwar and producer Sheba Alexander longed for a ‘neighbourhood art community’ that was friendly and not intimidating. It is with this purpose of spreading the arts in an amicable and informal manner that the studio was set up. Since its inception, Harkat has become a host to all kinds of performances—from mushairas to solo performances to the monthly Wohnizimmer Konzert or the ‘Living Room Concert’, every artist breathes new life to the studio with unique routines.

At this point, the reader may wonder about why a museum that houses art dating back hundreds of years finds its mention with two alternative performance spaces that haven’t even seen the light of five summers. These two different generations of art institutions however have a lot more in common than I first believed. On inspecting their functions and aims, I realized that both the great grandfather and the child are working towards one common goal: reviving the arts and making them accessible.

In a country where less than 1% of the annual budget is allocated to culture by the government,art is often privately owned and so becomes inaccessible to most. It is here that we clearly see the similarity in the two types of institutions at hand. Dr. Bhau Daji Lad Museum, The Castiko Space and Harkat are all spaces devoted to making culture and its world that caters to all audiences and makes them feel welcome. These organizations work hard to make their centers a space that attracts diverse audiences.

To introduce audiences to diverse artistic expression and to remain relevant to audiences across a spectrum they try to create content and curate exhibits that strike a balance between older and more contemporary art sensibilities. This is done by both—shows that are at this intersection in themselves and also by handpicking themes on both ends of the art continuum. The museum, for instance makes use of modern multiple media forms for an enhanced experience such as in their latest exhibit by Sarnath Banerjee titled ‘Spectral Times’ which combines visual art and storytelling for a thrilling encounter. Similarly, while curating performances at their venue, The Castiko Space tries to cater to diverse audiences. Parallelly, Harkat views the arts through a political lens where it tries to host shows that are progressive in nature and those that deeply value the artists’ expression and freedom of speech.

All the establishments are also in touch with the younger generation through their social media presence and try to make it a space where they design content that is relatable. The finest example of this is Dr. Bhau Daji Lad Museum’s Instagram account where they post selected pictures from their weaponry section every Monday after a new Game of Thrones episode airs. They pick and choose weapons similar to the ones shown on screen in the show. How cool is that!

In terms of financial accessibility, all organizations are toiling hard to make their art readily available to the audience. Harkat does not charge any artist for the space. The studio consciously makes an effort to price their tickets at affordable rates and also hosts some free shows and workshops. The Castiko Space rents out its shed for rehearsals and performances at subsidized rates and keeps a check on ticket prices. The museum has a nominal entry fee of Rs. 10 for adults and Rs. 5 for children. Since it receives funding from private organizations, it puts in great effort in ensuring that out of the massive number of workshops it hosts, as many as possible are free of cost.

Thus, the running of a cultural space requires continuous questioning and reflexivity. Ruta Waghmare, an art enthusiast who heads the education sector at the museum tells us how important it is to look at curation by stepping into someone else’s shoes and thinking whether an exhibit or workshop would interest them. It is also important to remember that all these organizations aim at using art for social change. As Sheba from Harkat explains, “It is not our responsibility to change the world, but it definitely is our responsibility to start a conversation.”

Thus, it is these spaces—some established by our forefathers and others by our own generation that protect, sustain and enhance the city’s rich cultural heritage. Whether it is an organisation that pre-dates our country’s independence or one that is still in its teething period, they are working towards a common goal — extending the reach of the arts far and wide.