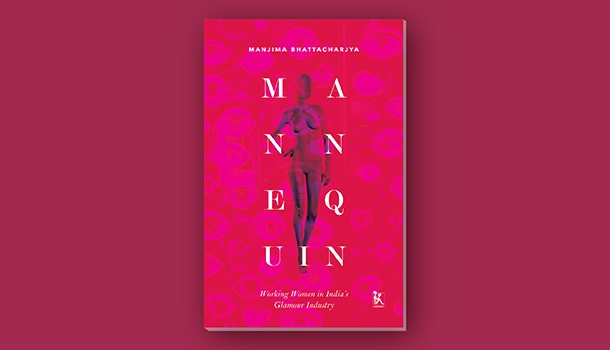 In Mannequin: Working Women in India's Glamour Industry, author Manjima Bhattacharjya explores the changing relationship between fashion and feminism. Manjima is also one of the panelists for our event So Many Feminisms! Here is an extract from the book:

In the late 1980s and early 90s feminist groups were consumed by the politics waged on their bodies as wombs. They battled the perception of women in society as being essentially childbearing machines, with little say or choice in the matter. They fought campaigns against the population control politics of the Indian state (coercive sterilization of poor women and men to stem population growth, seen as the main obstacle to India’s development), against unethical trials of injectable and other contraceptives by pharmaceutical companies, upholding women’s rights to have control over their bodies.

The feminist health movement engaged with the body more intimately, training women to know and love their bodies, to even look at them. Very few women had ever looked at their naked bodies in the mirror, such was the veneer of shame stitched fastidiously onto Indian women’s bodies – even those of feminists.

Health activist N. Sarojini, then with Delhi-based group Jagori, recalled the challenge of practical sessions in their trainings that involved ‘examinations of breasts, bimanual examinations of the uterus, abdominal examinations and so on’. Sarojini wrote, ‘I was very hesitant initially and discussed this with Abha (Bhaiya, cofounder of Jagori, a Delhi-based feminist group). She asked me once, “Don’t you look at your face in the mirror? How different is that from looking at any other part of your body? Don’t you let the doctor to examine you when you go to a clinic for any complaint?”’

In those days, the most obvious expression of discomfort with objectiﬁcation was in feminist responses to sexist ads, and occasionally the local beauty pageant. Members of the Bombay-based FAOW Nandita Shah and Nandita Gandhi remember protesting outside Shanmukhananda Hall in Bombay in the late 1980s where the Miss India pageant was being held. ‘It was not that big, or prestigious at the time,’ Shah says. They stood with other activists outside the venue with placards to mark their objection. Shah recalls, ‘At that time, the contention was objectiﬁcation. That women were being reduced to just their bodies like lumps of lard.’ What did the placards say? Gandhi laughs. ‘Ban the beauty pageant, what else! We had limited imaginations at the time, re!’

Across the country, groups turned vigilantes against sexist ads on billboards and ﬁlm halls where ‘blue ﬁlms’ were showing with posters of women in different states of undress. Women’s groups learnt how to procure ladders, climb onto billboards to blacken them, how to throw tar or black paint so it would strategically hit the target (often pictures of women’s body parts, being used to sell the product being advertised).

Feminist activist Madhu Bhushan, at the time with Bangalore-based group Vimochana, remembers an ad for Godrej typewriters that used the trope of the secretary as its theme. A buxom woman in a polka dot dress with cleavage showing, with the tagline ‘The type you can click with’. ‘We blacked it out, brought the hoarding down,’ Madhu says. ‘There was a funny backlash to our acts,’ remembers Madhu. ‘The hoardings were put back up with black bands on strategic parts, which made it more conspicuous!’

Kalpana Viswanath, a researcher and activist then working with Jagori, remembers protesting against a print ad for a chocolate biscuit by Brittania. The ad referred to the temptation of chocolate, with the tagline ‘When women say no, they mean yes’. Kalpana was horriﬁed by the message – coinciding as it did with efforts from women’s groups against sexual assault, pointing out that ‘no meant no’. She says, ‘We mobilized other women’s groups, and had it removed.’ They wrote to the company registering their protest at the problematic line and its wider implications. Brittania withdrew the ad.

Several of the older feminists now remember that phase with some embarrassment. Madhu says, ‘If you look back today it’s almost like moral policing. Feminist moral policing.’ ‘We were uncomfortable to stand alongside the BJP (right wing) women. We were against objectiﬁcation, but for them it was a moral issue,’ reﬂect Gandhi and Shah, remembering how the group had gone blackening posters of Blue Lagoon, a Brooke Shields ﬁlm with nudity, seeing it as semi-pornographic.

As feminist academic Mary John says of the time, ‘We had confused sexism with showing of too much skin as a sign of domination and patriarchy. It was an incomplete argument.’

Concerns around body image overall were absent in that period. Queer feminist activist Jaya Sharma recalls returning from the UK after higher studies, and ﬁnding that the groundbreaking ‘Fat is a Feminist Issue’ by Susie Orbach had bypassed Indian feminists. She says, ‘Elite class feminists have never been very political about the body. I would be mildly horriﬁed how even the most vociferous feminist had no qualms saying “oh you’ve lost so much weight” or “you’ve put on weight”, even though it might be in contradiction to our feminist politics.’

Comments from politician Mulayam Singh Yadav on short haired women ‘parkati aurat’ as he mocked his arch rival Mayawati after she got a ‘bob-cut’ riled feminists across the country, but that (and a critique of ‘fairness’) was the extent of engagement with body image.

Such a division however disappeared as the Miss World pageant in 1996 brought Bangalore to a halt.

On the eve of the international Miss World pageant in Bangalore in 1996, organized by Amitabh Bachchan Corporate Limited (ABCL), the city erupted in protest.

There were three ‘parties’ that were part of the protests, the Left, the Right, and the Left-leaning Feminists. All three were, in fact, protesting different things.

Left parties and their supporters were objecting to globalization’s effects (as symbolized by the pageant). Right wing parties objected to Westernization and the erosion of Indian culture they felt this would lead to. And women’s groups were protesting for a combination of reasons, including the ‘commodiﬁcation’ of women. Rather than mere objectiﬁcation (the premise of previous protests), the concerns this time were about women being a marketable commodity in the (then new) context of globalization in India.

The media and public however could not appreciate the nuance. The perception remained that the fracas was moral opposition to women going onstage in a bikini. (The organizers later ‘solved’ the problem by shifting out the swimsuit round to the Seychelles Islands to prevent further protests.)

Madhu, who was at the forefront of the action says, ‘It was a watershed moment for Vimochana in Bangalore. It really brought everyone on the streets. But it was also confusing. The extreme right, the extreme left together with feminists! The discourse in terms of protest was laid down by the right wing. A BJP woman said she would burn herself if the beauty pageant took place in Bangalore. We had to ﬁght for our own space, differentiate our own language and make it clear that we were talking about the global politics of the beauty industry.’

Within days, the matter became serious. Picketing and dharnas escalated to arrests of women protestors and immolation threats. The Bangalore women’s groups issued a statement to make their position clear, endorsed by women’s groups around the country.

In solidarity, women’s groups in other cities mobilized, gathering in rallies, doing street plays on the issue, and distributing pamphlets at busy corners. FAOW led the protests in Bombay. In Delhi, they were organized by Saheli and other groups outside the Times of India ofﬁce, who were the sponsors of the event.

Laxmi Murthy, member of Saheli at the time, recalls the ‘huge discussions and introspection amongst us’. She says, ‘I remember a poster we made in that period which said “Khane ko nahi roti, Dhoondne chale beauty” [We have no food to eat, But here we are searching for beauty],’ which reﬂected the underlying spirit of the protest: Women’s groups were less bothered with ‘vulgarity’ and more with seeing this as a ‘sign of imperialism, a shift in priorities’.

As Laxmi says, ‘The winners of beauty pageants suddenly being from Argentina, Venezuela, India was directly linked to increasing market outreach of multinationals selling cosmetics and personal care products. That was what we were protesting. And it did happen.’ Mary John wrote in an important piece37 in the aftermath of the protests, ‘Notice also how far the world of advertising has evolved from the earlier degrading if not the crude use of women’s bodies for male gratiﬁcation. As active and vital consumers in their own right, women are both depicted and addressed differently.’

In the long run, women’s groups were proved right. Kalpana says, ‘In hindsight, the critique of globalization and the argument about it being a move to exploit India as a market was apt. The market did open up, and in a way we couldn’t have imagined. I don’t think though we had great impact – it was quite a fringe kind of thing. It was the force of history and the force of economics at the time, and we couldn’t keep up.’