Blog » Evanescence is just a word 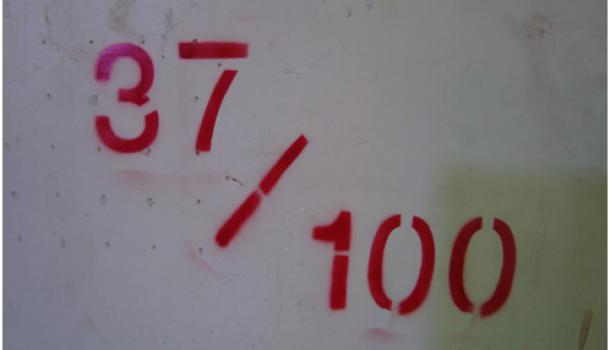 Graffiti by Vaibhav Shah at Museum of Memories

In my new book of short stories about Bombay/Mumbai, the protagonist of the story titled ‘My Revenge on the Beast’ says: "In this city something is always disappearing. A piece of empty land disappears behind a sudden wall of asbestos sheets, so high, so closely guarded by uniformed men with red badges and black guns, it makes you wonder what could deserve such secrecy. You hear, as you pass, the whine of machinery, complaining, you hear the drone of earth-eaters, you hear shouts. Some months later you see the grey skeleton of a building towering above the asbestos skirting, no secrets now. It is ugly, pocked with holes where glass eyes will come. The piece of sky above the piece of no-longer empty land disappears. You never really saw the empty land until it disappeared. That’s when you remember the lean-to that had stood under the thickly clustered trees, the names of which you do not know, except, maybe, ‘tamarind’. You remember a squirrel leaping from tree to tree, signs of habitation, one gleaming aluminium pot, a broom, rich green grass that may have hidden snakes. You never realized how full that empty piece of land was until it disappeared."

The need to remember the city, to inscribe the city through all its bewildering shifts and changes, is one that has always animated my work, be it my most recent fiction or my poetry. It’s almost as if by putting it all into words, the vanishments will be reversed, the ephemeral made permanent. And that’s what seemed to be at the heart of the Museum of Memories, a day-long celebration inside a structure on the brink of demolition. What a haunting idea! For me, every piece of writing is a structure on the brink of demolition. To enter one such actual space, in all its concreteness and solidity, to be aware that this too shall pass, reduced the very next day to rubble—how could I not be affected by the idea?

I landed up early, much before I was due to read my poetry, and drifted from section to section, from installation to painting to ignored vacant corner. I remembered the times I was a regular visitor to the Godrej campus (had I ever noticed this warehouse, I didn’t think so), I was still in advertising then, and Godrej was one of my accounts. I’d worked on the ad-films for Godrej refrigerators and the centenary celebration films, so many professional and personal memories came flooding back that morning.

The poems I had chosen for my thirty-minute slot were choreographed with event and location in mind. So naturally, I read 'Cities', my love-song to the city-person who cannot imagine living elsewhere. And of course I read 'Dogs, Mobs and Rock Concerts', the poem I had written to commemorate the Rolling Stones concert at Wankhede Stadium a decade ago. And ‘Boxes’, in which ‘The sea becomes a distant memory of lashing wave/ and neon, siren to seven islands, once’—how could I not read 'Boxes'?

And then, because it seemed fitting that I should, in the Museum of Memories, read, for the first time, a poem called 'The Museum of Stones', I did, and found myself back in Tranquebar, the place that had triggered the poem. It wasn’t nostalgia at play. It was desire. The desire to return to moments that mattered intensely, private moments that I had marked and encoded in my poetry and was now sharing with a floating audience at a public reading in a vast space that would soon no longer exist.

Once my reading, and the day was over, how else could I process it all, but through another poem? A prose poem, an impressionist snapshot, call it what you will, for me this text is what remains of that day, that space, a memento of more than dereliction.

Outside the world oblivious

Trapped pigeon in a warehouse about to fall to make space for more than dereliction. Heat fills the halls denuded of function, doors break down to make way for emptiness. Numbers speak a language we do not understand, 37/100, what? In a long inner room Mario’s mural. Hot spots of light caress the walls, girders bristle with steel stalactites. There was a time she might have pressed buttons, composed a message to bring another country into this high-walled house of wares that are no longer valid. Solarized shadows. A crow-king receives his cawing courtiers. Cupcakes do the rounds, traded for kisses and whispers. All this at high noon, blistering through open windows overpowering the gust of storm-fans and the shower of marigolds blooming under a voice so strong unfettered and female the walls shake. Provisionality sweeps over us. We eat endlessly, as if tomorrow, we too were being demolished. Small brown khullars make their way to our lips. Tea exists, as substantial as sandwiches and samosas and the solarized shadows of women in broken doorways. In the typing pool paper rises to the clacking of fingers. The light is strong and falls inward. Plastic fans grow out of our hands, sound deafens, hearts leap to boom boxes, this emptiness amplifies beyond doubt, this is a city of drifters. Hot white tea is served on stage to disbelievers. Rivers named after women are invoked in an ode to ugliness that fails. Headgear prevails. Mysterious playing cards circulate like contraband, an unexplained attraction draws the man in the hat closer, doppelganger to another more attractive, absent. Is there room for this? No one can bear to listen anymore. The poets read, the musicians sing, the white steps move, evanescence is just a word, a container truck leaches through the light, when someone says ‘bird’ a helicopter can be heard, outside the world oblivious to the green-heart, the pillar that painted itself orange and yellow, the taxi melting on the wall. Hair hangs, cords spiral on the floor like the installation no one intended. Who shall I invite onto this stage, where the serpent and elephant survive in silver and string, and words slip like feni onto the parched tongue of the day?