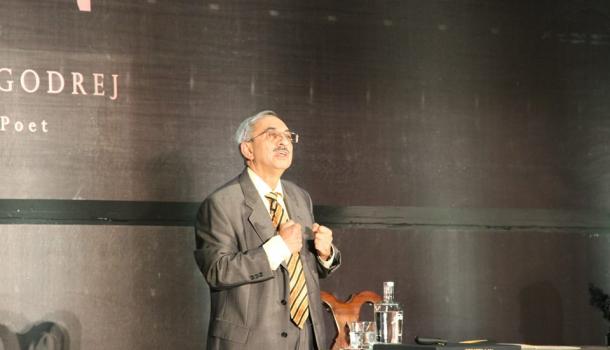 Mr. Nadir Godrej made a speech at the Rotary Club District Conference at the NSCI Stadium in Mumbai, in verse, about our Culture Lab! Here it is:

Man does not live by bread alone
He also needs a mobile phone!
But accumulating everything
Really never seems to bring
True happiness that can last
For transient pleasure passes fast.
Rotarians know this very well.
Observers can quite quickly tell
That you are living free from strife
A collective, purposeful life.
And culture helps to get you there,
Motivates you to share,
Inspires you to freely give
And instructs us all how to live.
Cultural observers often see
Two cultures, one with a capital C
The other with a c that's small.
The first perhaps would cover all
Visual and performing arts,
Designed to entertain and teach,
Often somewhat out of reach
To those that are not well exposed.
And they in turn are overdosed.
At culture, Godrej took a stab
And started up its Culture Lab.
Parmesh Shahani was then hired
And ever since we've been inspired.
Now capital C does play a role
But that is not our only goal.
For Capital C is everywhere
And so we think it only fair
We emphasise the smaller c
And what indeed could that be?
Reality not imagination.
The actual state of our nation,
Shown through documentaries
As well as social commentaries
The way that people live their lives.
Each participant then strives
To question, probe and find insight
And figure out what's wrong and right;
For which ideals we should fight;
What is profound and what is trite.
My friend Parmesh will often state
His job is to cross pollinate.
Hybrid thought is full of vigour
And the Culture Lab is the trigger!
If fecundity is the game
Our Culture Lab has a claim to fame.
Politics, fashion, design and arts,
We put together different parts
With the very simple goal
Of making a much larger whole.
Our events are open to everyone
Free access to learning as well as fun.
Since everything is recorded
Total access is afforded.
This is more than evolution
This is now a revolution.
We have provided to the city
A platform for creativity.
Our employees are now proud
That we have provided them with LOUD
It stands for Live Out Ur Dream.
We finance the winning theme
And all the winners are so thrilled
To get a chance at being fulfilled.
And all the links we make, I guess
Further help to achieve success.
Once Culture meant tradition
But after the enlightenment mission
The future trumped the past.
Traditionalists were aghast
A rearguard action was fought
And even today it is sought.
Tall claims were recently made
And fictitious inventions displayed.
In spite of all the news that’s bad
I'm sure most of you are glad
To live in these promising times
When there are far fewer crimes
And far fewer deaths from war
Than the world ever new before.
Most of our lives are full of ease
And largely free from disease.
Now culture, and here I mean all,
Capital C as well as small,
Can help us find meaning in life
As well as minimise all strife.
True knowledge of the human condition
Will prevent the forces of fission.
If we understand each other
We'll be like sister and brother:
Occasionally we’ll fight
But very soon we will unite.
If disputes are handled with discussion
We can avoid knocked heads and concussion.
And culture will show us the way
To convince rather than to slay
And if eye to eye to eye we can't see
Let's just agree to disagree.
For culture is the greatest prize
When we’re taught to be wise!