Culture Lab in the Land of Nawabs (and kebabs)

Blog » Culture Lab in the Land of Nawabs (and kebabs) 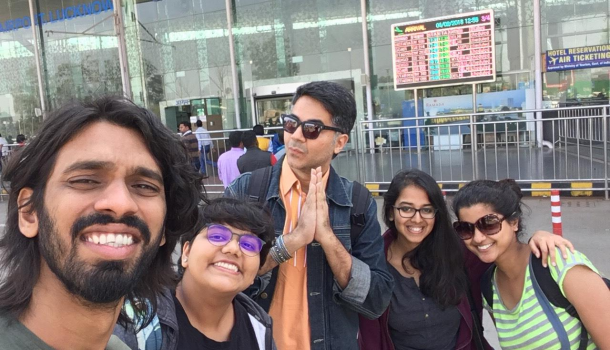 A typical case of bad flight food later, the team eagerly headed straight to the Mahindra Sanatkada Festival the centrepiece around which our itinerary was constructed. Our four-day annual reflect and recreate trip, was designed to be a delightful encounter with the Lakhnavi way of life and its resplendent history. The carefully curated Sanatkada Festival was a great introduction to the Lucknow’s rich culture – nawabi, colonial and contemporary. 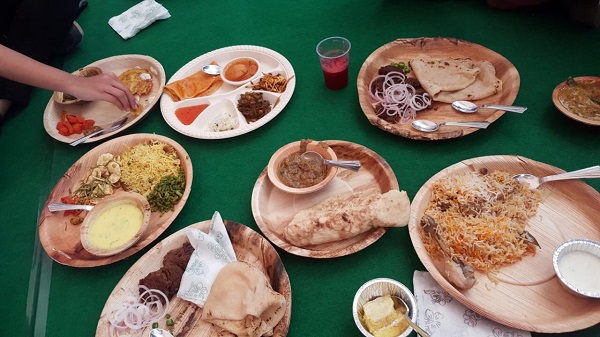 As soon as we landed, we rushed to the Awadhi Home Cooked Festival, an event at the Sanatkada Festival that brings together the best home cooks of Lucknow. So fierce is the competition to sell your food at this festival that the festival has had to set up a food committee that goes through tastings of hundreds of dishes every year!

We went about wide-eyed around the food stalls. So many dishes that we had only heard about! The Mutton Nihari, the melt-in-your-mouth Galawati Kebab, the slightly sweet Sheermaal roti, etc. opened up a whole different avenue of North Indian cuisine for us. I must confess, I didn’t eat any of it. As a vegetarian I thought I will have nothing to eat in Lucknow’s much talked about love for mutton kebabs. The vegetarian stalls I visited were predictably empty, but people don’t talk much about the city’s Marwari culture – and the Marwari thali did not disappoint. I was an immediate fan of the unnamed dishes, in many colours.

Later the next evening, we devoured yet another round of Lucknowi food at the festival, but this time it was street food. We just couldn’t get enough of the Tokri Chaat, the myriad kinds of Kebabs, and the multi-flavoured Pani-Puri! To top it off, the unbelievably soft and foamy makkhan-malai dessert, ‘Nimish’ was quite literally a little piece of heaven in a bowl. 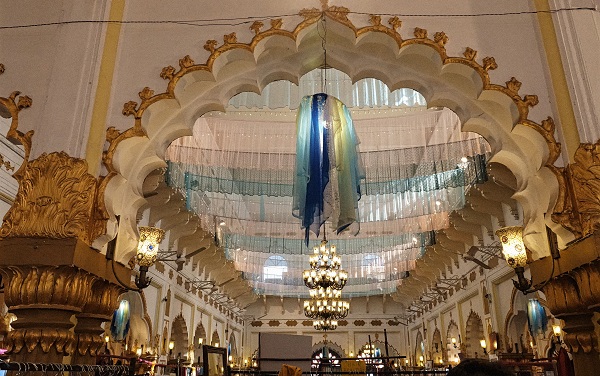 The Sanatkada Festival is housed in the Safed Baradari, at Qaiser Bagh, a beautiful white marbled structure, built as an imambara (a Shiite shrine) by Nawab Wajid Ali Shah in 1854, and later used by the British as a courthouse. And with the theme of the festival being ‘Francisi Awadhi Ta'alluqaat’ (The French Connection with Awadh), it weaved together yet another phase of Lucknow’s history. The most obvious culmination of the festival’s theme was an exhibit displaying eighteenth century paintings from all over the world, sanctioned in Lucknow during the French presence. The most important figure in the exhibit was that of Claude Martin, an eighteenth-century Frenchman who was initially an officer in the French, and later the British East India Company. He served under Asaf-ud-Daulla, the fourth Nawab of Lucknow and was reputedly the richest Frenchman in India at the time. 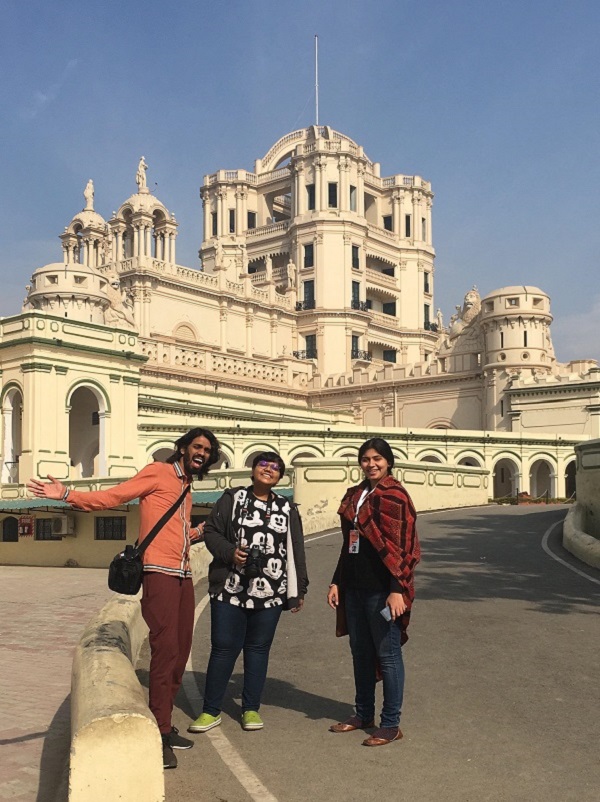 The beautiful La Martiniere College, is a stunning building of confused architecture. Our guide Nimra Rizvi(picture above), who is a researcher and curator at Sanatkada Festival was fantastic. The building which was built by Indian sculptors with Greek, Roman and French architectural elements was lambasted by magazines, calling it ugly when it was made. Today, however, it is a historical marvel. The college is actually a school for boys. Martin could not complete the building during his lifetime, and so wrote specific instructions of where roses need to be planted and which rooms can be converted into reception areas, etc in a 300-page long will! 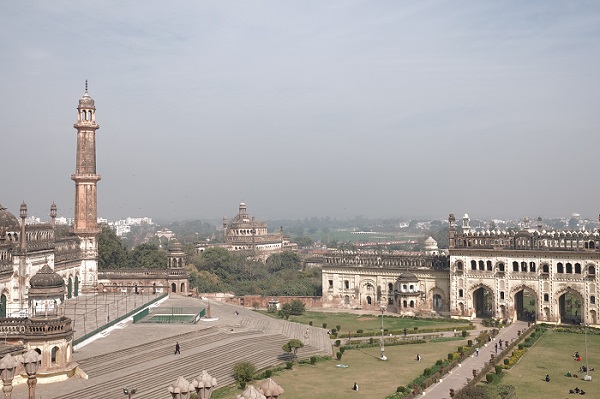 Our first architectural destination in Lucknow however, was the Bara Imambara, a massive complex built by Asaf-ud-Daula in 1784. The Imambara also houses the grave of the late Asaf-ud-Daula. 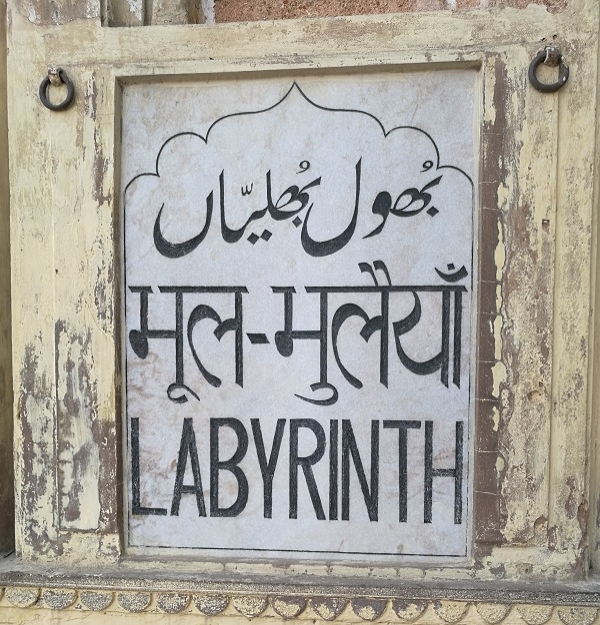 The surrounding chambers, from being built to different heights to support the massive structure on a marshy foundation, resulted in a bhool bhulaiya (labyrinth) with interconnecting passages that have 489 identical doorways. We had fun navigating the narrow passageways all the way to the top of the Imambara for a stunning view of the whole complex, which also includes a mosque, huge gateways and a step well. The sheer magnanimity of the Imambara and its rows of symmetrical domes left us in awe! 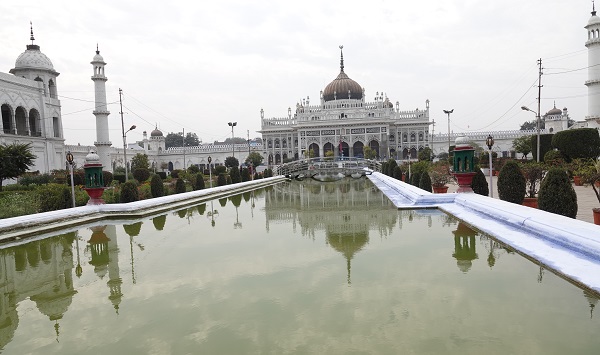 Next, we made a quick stop to the Chota Imambara(picture above), which was built in 1838, by Muhammad Ali Shah to serve as his own mausoleum and that of his mother. The beautifully inscribed Islamic calligraphy on the exterior and the plethora of colourful chandeliers dangling in the interiors was what made it a stunning sight. We then headed to the Residency complex, or rather the ruins of the complex which was built during the rule of Nawab Saadat Ali Khan II, the fifth Nawab of Awadh. This is also the site of the 1857 uprising where the Residency was under siege for 148 days!

The tours to all three of these places were conducted by Cyrus from Tornos City Tours, who hardly flinched from any of our questions, and mostly had historically correct information that was verified by our resident historian Saniya.

On our very last day in Lucknow, we went on a rather special tour of a series of old houses in Lucknow. We were accompanied by Arundhati, a volunteer at Sanatkada and Nasima Aziz, who has edited a book on old heritage homes in Lucknow, called ‘Rehaish - At Home In Lucknow’ written by Adity Chakravarti. 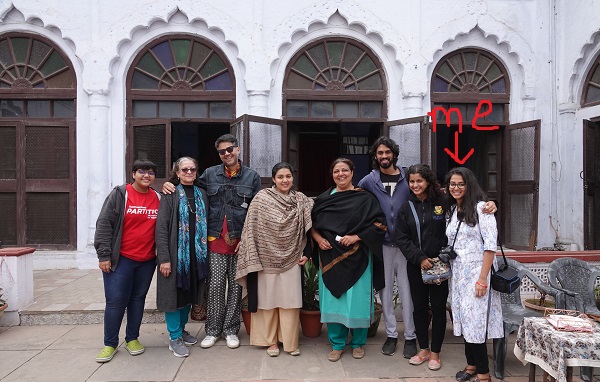 We were given a warm welcome into each of these homes, and listened with delight as the owners spoke of the glory days of these households. The very first home we headed to was a little more than a hundred years old and had a square courtyard in the centre, with rooms built around, some even conical in shape! Giving in to the demands of maintaining such a huge property, it now houses five different families. The owner Sheba(picture of Sheba with team above) was extremely welcoming and even offered us some sumptuous homemade Jalebis and Namkeen. She also offers homemade Lakhnavi meals at her heritage home. Get in touch if you want one.

We then went on to visit three more homes, the last of which was the Jahangirabad Palace. The old Raja very kindly took us through its spectacular halls decorated with beautifully handcrafted artefacts and old photographs which were testament to the fact that the grand home had once played host to the likes of Jacqueline Kennedy and Bollywood stars. The Rehaish tour was a wonderful glimpse into the lives of Lucknow’s erstwhile elite. Although it left a bittersweet aftertaste as the owners were now struggling to preserve their rich personal heritage. 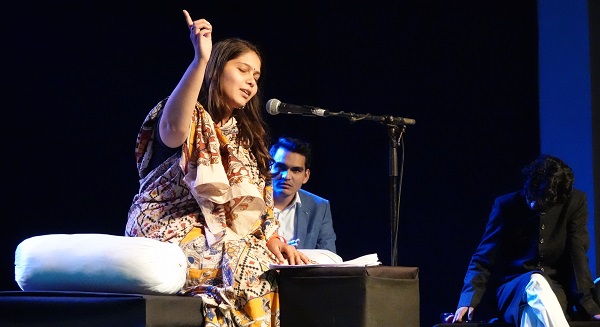 We’re really grateful to Sanatkada for being such good hosts to us through our trip. It was lovely seeing an organisation work tirelessly towards promoting and preserving the art, craft and history of Lucknow. We still can’t forget Sabika Abbas Naqvi’s hair-raising performance of her feminist poetry. We also came back with bags full of Lucknowi chikan fabric and other traditional wares from the festival market. The delectable food still has us dreamy-eyed. The Land of Nawabs was indeed a memorable dip into culture, even if I didn’t have any of the kebabs.