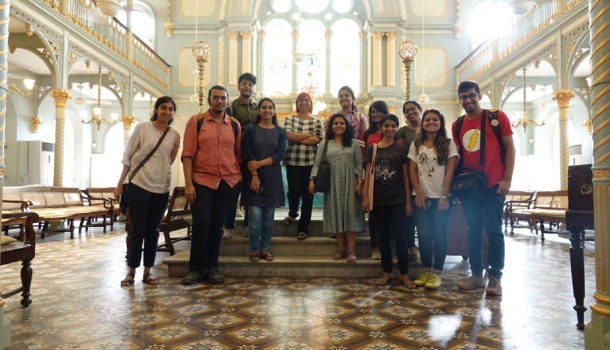 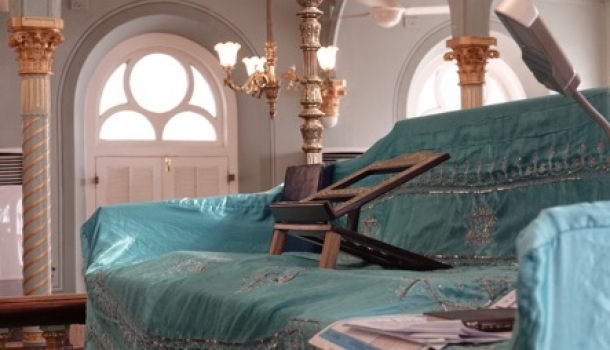 What makes up the heritage and culture of a city, or any place for that matter? What parts of this heritage do we showcase when we try to explain the same? Imagine this: you have a visitor from outside of Bombay; where in the city do you take them? If you rattled off a list of monuments and iconic buildings in the city (the Gateway of India, VT, Marine Drive and so on), you’re not alone. Buildings and monuments have an extremely intricate relationship with the heritage of a place, and hence, conserving them for future generations becomes quite important. This means dealing with complicated questions of what to change and what to leave untouched, ensuring historical accuracy, the relationship between tradition and modernity and whether they are even at odds.

Change is deeply linked to tradition and heritage. Architect Preeti Sanghi brings this up while telling us about her journey – she tells us that life gets better not by chance, but change. This is rather insightful, as Preeti works with conservation architecture and tradition, history and change are concepts she works with to a large extent. Tradition, to her, is not possessed by anyone, and must be interpreted and in a constant state of evolution.

She explains the ideas behind her work using three points, the first being why the JSW Foundation works specifically in the arts, their vision for the same and the strategies in place. The arts are unlike other fields in that one must be extremely passionate about them to even be in the field, and it requires patronage to truly flourish. Mass appeal is not something that art can truly cater to, and hence in order for the sustainable development of the arts, for the creation of art to fulfill only the idea with which it was created, a strong support and patronage is required. The next point deals the intrinsic connections between heritage and tangible aspects of the culture of the area, such as food, old monuments, and using this idea, Preeti explains the process of deciding which aspects of the arts that need to be preserved, and how to go about this task. The last point deals with making art a part of your everyday life. In what way can we achieve a cohesive relationship with art, so much so that it does not form a secondary, separate entity, but rather is a part of our being.

Preeti talks about the ways in which she works to promote the arts, namely raising awareness by creating publications like books, comics and short stories. Her work also includes providing artists with a platform for their work to reach a wider audience, and achieves this through supporting music festivals, introducing new artists to different audiences, the documentation of music - Indian forms of music in particular. They do this through camps and an initiative called Writers Bloc, which encourages young writers to develop their work, and then perform these works at the Writers Bloc Festival.

She also works to support art festivals such as the Serendipity Arts Festival, book readings, public art installations, literature festivals, museums and so on.

Preeti also tells us about her ‘Look Up Mumbai’ project, where she tries to bring to the forefront the ceilings and domes of buildings in Bombay. She talks about how we look at facades and how our view of a monument is always restricted, and the ceilings of these monuments don't receive the recognition that they should. Hence, she and her team moved around the city, documenting the domes and ceilings of iconic monuments and buildings, and displayed these in a dome they constructed themselves with the help of projectors giving the viewers of the exhibit a feeling of being under those very domes and ceilings.

Preeti also works to a large extent in conservation and restoration projects, being a conservation architect herself, and describes a few of the projects she worked on. Her first project was the JJ School of Art, which comprised of restoring the paintings and the building itself. The next project she talks about is the SNDT Kanyashala, which is an old girls school in Girgaun, and this project brought up the issue of post-restoration care that must be taken by the architect. The work does not end with the end of the construction, the building becomes like a living being that requires care, maintenance, and upkeep, and the Kanyashala is one such structure.

The Chandramauleshwar Temple in Hampi, her next project, was sinking into the river that flows around it, and this case was one where the work was centered not around restoration but preservation. Hence, the walls around the temple were reconstructed to be stronger, and the actual temple was not touched. In contrast to this, she worked on the Soumya Someshwar Temple immediately after. This temple had been neglected and was so far gone that it necessitated a complete dismantling and reassembling of the temple, with some parts of it needing to be recreated. These two projects illustrate the study and research that must go into conserving an old monument, and the decisions that must be made about whether it is to be restored or preserved, the challenges and threats that it faces, and depth of knowledge required to even begin to formulate a plan.

The Keneseth Eliyahoo Synagouge was another project that was taken up by Preeti and her team, and the work here involved an in-depth study of the entire structure down to the smallest aspects, such as the decals on the wall, the colour of the paint on the walls, the disassembling and reassembling of the stained glass window, the furniture, the tiles, and so many more details.

Another project she worked on is the Kuldhara Village in Jaisalmer, which was an abandoned village, thought to be a centre for paranormal activity. Preeti describes how the interventions made were made independent of the structure, creating a clear divide between the ancient structures and the modern roofs, achieved by tensile structures that could be disassembled without affecting the original village. Preeti also discussed the interesting conflict inherent in ‘restoring’ a village that is supposed to look abandoned, desolate or haunted.

Integrating art into our everyday lives is not an easy task, especially if the work we are involved in doesn't deal with art as a field, but this can be made easier by modifying the environments we surround ourselves with. The integration of art into your everyday life should be an organic process that makes it a natural part of your thought process. Be it reviving a heritage and culture through physical monuments and structures to bring in more and more people that visit them and learn about them, or encouraging budding writers or musicians and providing the space and means for them to see their work come to fruition, or publishing documentation and books of ancient temples, to simply being an encouraging audience, there's so many ways to help the arts flourish. Art, culture, heritage are all intricately tied together, and in supporting the development of even just one of these, the smallest act goes a long way with them all. Change is inevitable, but is in our hands in every way, and changing the world for the better is very possible, one work of art at a time.

Walkthrough of the Keneseth Eliyahoo Synagogue with Preeti
by Shamik Khan 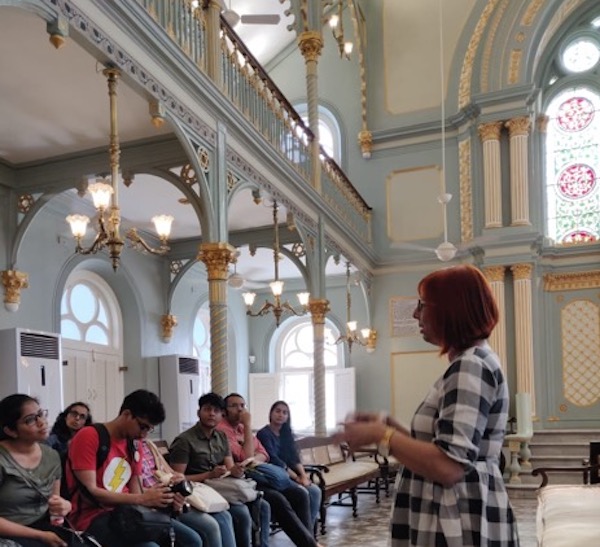 It was the 9th day of our leadership program and we were at the Keneseth Eliyahoo Synagogue. It stands up distinctly amidst Victorian buildings and fancy restaurants in the Kala Ghoda area. It stands as a testimony to Jewish tradition combined with Indian and Victorian influences. At 4 o clock, sharp, we assembled outside the building and Preeti very warmly ­welcomed us in. ­­Preeti is an architect with experience in design, journalism, teaching, research, development and heritage and she is the head of the art & heritage department of the JSW Foundation. She talked about the facelift of the synagogue and the rich legacy stored in it. The JSW Group along with the World Monuments fund and the Kala Ghoda Association had taken on the project to renovate the ­135-year-old synagogue. 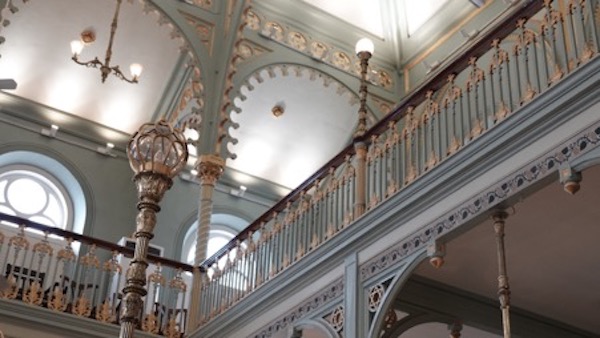 She talked about the problems that left the synagogue without sufficient funds for conservation – it is in part, due to the shrinking Jewish community in Mumbai. She also discussed the challenges of maintaining the synagogue. From water infiltration to delicate stained glass panels to cast-iron columns. She told us about unpolished and broken Victorian Mint mosaic tiles, timber balconies, and staircases that were in need of careful restoration. In this way, Preeti articulated the comprehensive treatment that was undertaken during the restoration. 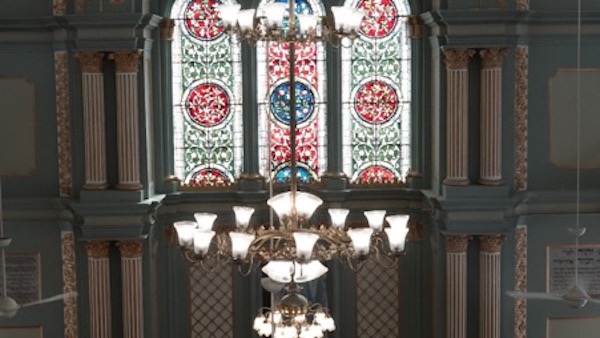 It was really interesting to know that the beautiful stained glass paintings depict 12 medallions which are dedicated to the Twelve Tribes of Israel. They were said to have been deported from the Kingdom of Israel after its conquest by the Neo-Assyrian Empire circa 722 BCE.

Besides the glass paintings, what fascinated me the most was the alluring sanctuary in the centre of the main hall with polished lamps around it. Placed on it is a platform, facing toward the front of the room. It is the table from which the Torah is read, and it is supposed to face Jerusalem. It was shrouded with beautiful blue cloth with silver embroidery. 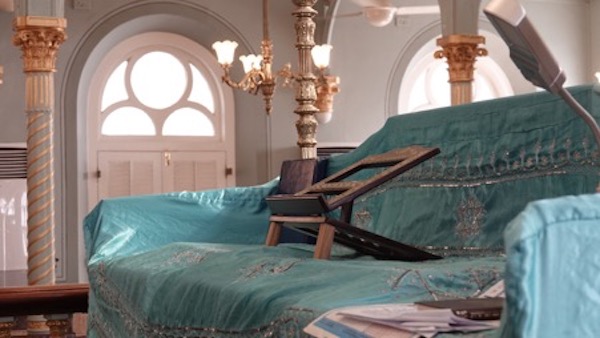 In front of the sanctuary was the holy ark which contains the Torah scrolls, the most sacred object of the community. The cabinet was coved with a beautiful blue cloth with inscriptions in Hebrew. And there was an eternal lamp situated above the ark. In Jewish tradition, men and women sit separately during prayers. Thus, the synagogue, has a separate seating for women in a gallery above the sanctuary. But the community is getting old and it is difficult to climb stairs. Now the synagogue allows both men and women to sit on the same level with a carved wooden partition in between. 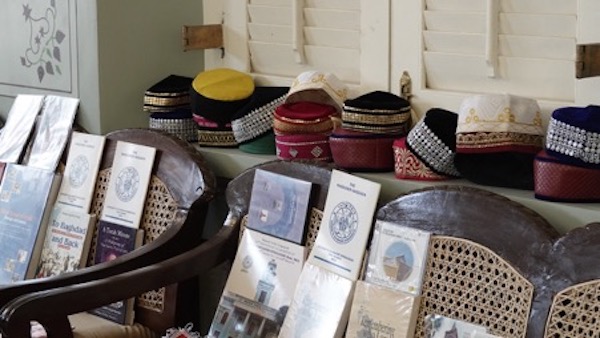 There was a great collection of books and journals in the synagogue on the landmarks, history, heritage and customs of the Baghdadian Jews and Bene Israel Jews. The synagogue stands as a symbol of secularism and allows everyone to walk inside and admire the place of worship. The hour went gone past in the blink of an eye and parting with the place was such a sweet sorrow. With some lovely memories captured in our cameras, we left the synagogue.