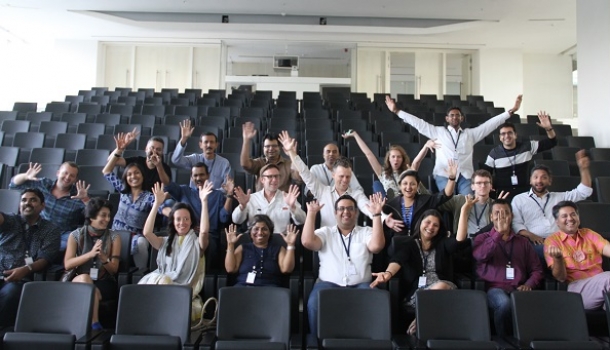 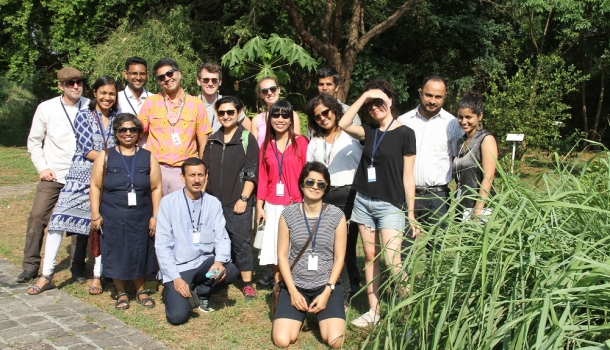 The TED Fellows!
Mangrove trail with the TED group

Interning at the Culture Lab, each day is an adventure. Today, however, was particularly interesting because we collaborated not just with an individual or two – but with over two dozen together! The Lab hosted twenty five incredible TED Fellows, including Lab Head and 2009 TED Fellow Parmesh Shahani, at our very own Viva Vikhroli. As they were busy plotting how to make the world a better place, I had the chance to catch my daily dose of inspiration.

While most people know of the now uber famous TED Talks, the incredibly diverse TED Fellows program is probably the organisation’s hidden masterpiece. The community, which includes more than 400 fellows from over 90 countries across diverse age groups, is downright fascinating. As someone who has struggled with critique of being too young to know what I am doing while creating an arts residency in Kashmir to promote cultural engagement in conflict zones, I was especially fascinated by the diverse age groups represented by the program. Sharing a room and learning from education superstar Babar Ali, who started a school when he was all of nine years old, proved to me that age is no barrier in creating change. Dubbed the “youngest headmaster in the world”, Babur has since taken his school from being a small initiative with eight students to a full-fledged government recognised educational institution with over 800 students!

Babar’s story of dedication and resilience against all odds drew parallels across stories put forth by other fellows. A fellow from Vietnam, Trang Tran, shared her experience working towards reducing the carbon footprint of Vietnamese villages by combining environmentally sustainable initiatives like preventing open burning of rice straw with smart business practices like using that straw to create organically farmed products. It was also incredibly refreshing to see that ideological commitments could go hand in hand with conventional “jobs”: ranging from Joey Foster Ellis’ artistic engagement with conservation efforts in Kathmandu to Nikhil Pahwa’s fusion of digital entrepreneurship and activism in the Indian internet sphere, the projects fellows were undertaking were heartening indicators of a changing global climate that allows those in the arts to craft viable career choices.

Amidst these discussions of projects and goals, moments emerged that marked the emotions accompanying difficult journeys of change. In fields where disappointment is a familiar bedfellow, Aparna Rao stood as a stellar example of how – despite initial hiccups and disheartening experiences – the experience of finding communities that understand you as an artistic individual is an invaluable one. And Rohini Rau, who’s done it all from being an Olympic sailor to a doctor to a medical clown, was a reassuring voice calmly noting that the first thing you do is never really the last!

Coming right after a vitriolic Presidential debate in the United States, the TED Fellows Mumbai Meet was a ray of hope in a dark and often depressing socio-political atmosphere. For me, it was an embodiment of what the Lab stands for: a hub for collaboration and conversation that pushed the envelope on social issues ranging from LGBT rights to education. Moving forward, I can’t wait to see the partnerships that emerge – both within the Lab and outside it – that are sure to create vibrant and dynamic platforms for change.