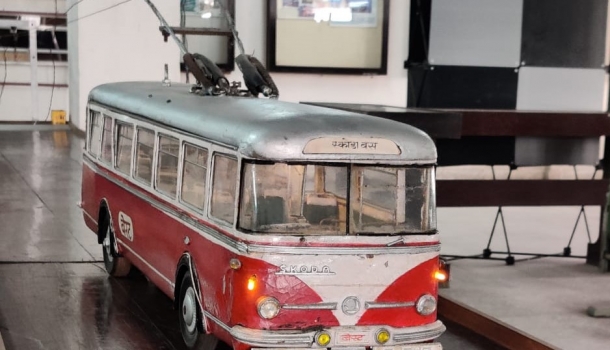 In the first week of February, we hosted CultureCon, the inaugural edition of a creative industry and arts management conference to initiate conversations around the cultural sector in modern India. While day 1 was packed with discussions about the challenges of the sector with experts from the field, the agenda for day 2 of CultureCon was all about allied activities where the participants were taken on trails across the city, exploring the culture of alternative spaces, museums, art, archives and much more. The culture trail I was a part of - Chalo Central, organised by the India Culture Lab team, covered the spaces on the central railway line of the city. 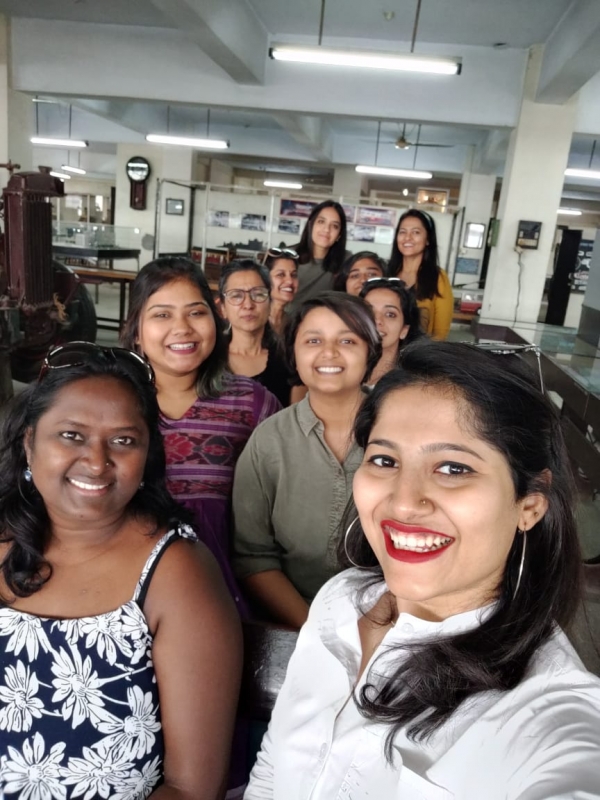 The starting point of the trail was the B.E.S.T Bus Museum at Sion. Before being informed about the trail locations, I had no idea about its existence. As I reached the entrance of Anik Bus Depot which hosted the museum, surprisingly I found no board signifying the presence of a museum. It made me wonder how many more such spaces out there were unknown to me.

We started our walk towards the B.E.S.T. Bus Museum which was situated on an entire floor of the office building. At the entrance, we were greeted by a life-sized caricature of a bus conductor, smiling and welcoming us into the museum. We met Mr. Pimpale, the museum’s curator. The museum at first glance was simple but extensive, it had collections of miniature bus models, engines, lamps, clocks, walls full of photographs and newspaper cuttings. 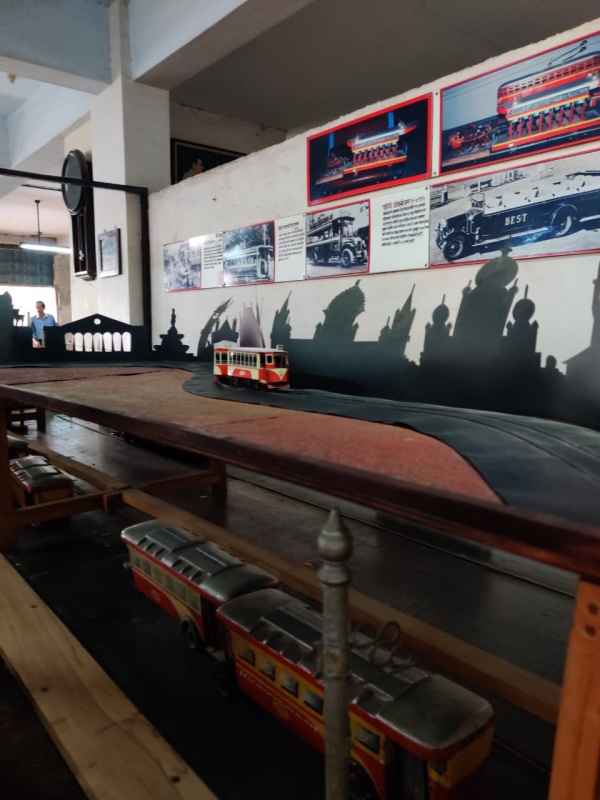 Mr. Pimpale started the tour of the museum by giving us a brief history of the B.E.S.T Company - how the trams functioned and gradually evolved to buses. While the first bus service started in 1926, people would still opt for tramps because bus rides were costlier. As we were shown the old mechanisms buses and tramps used, the easy to open windows and the reclining back seats, many of the folks wondered about the so-called technological advances which only make easier tasks much harder. To make the tour even more interesting, Mr. Pimpale would let us know about the assigned selfie spots in the museums against the backdrop of the collection of bus seats, caricatures, etc. where we would then diligently proceed to take a selfie. He also brought out the paper bus models made by himself and showed us how they operated on the floor. 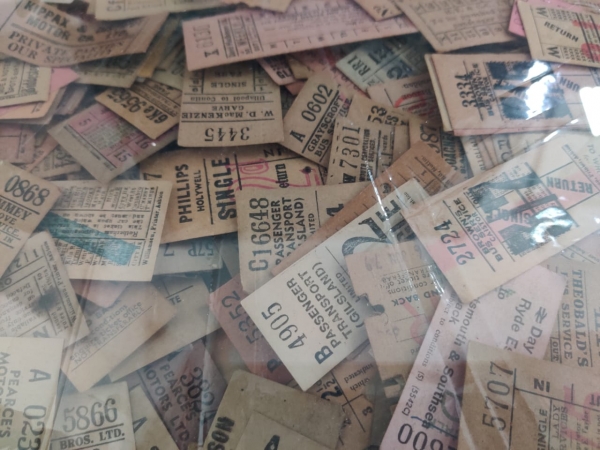 Along with their collection of bus tickets, conductor pouches, badges and how they had changed through all these years, Mr. Pimpale proudly displayed the museum’s private collection of thank you notes and greetings given by his tiny visitors - school children! Towards the end of the tour, Dolly Rateshwar, one of the participants on the trail, asked him about his inspiration. Mr. Pimpale answered that for him, it’s the people, and how he wants the visitors to feel like they are a part of the history while learning about it. 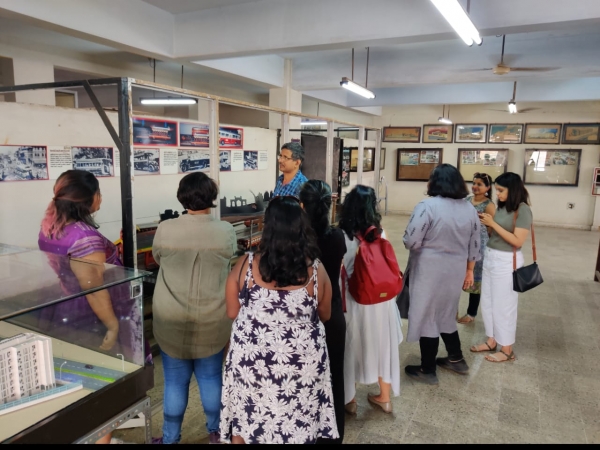 At the end of our tour, we thanked Mr. Pimpale for a wonderful museum tour and proceeded to our next stop - Godrej India Culture Lab. On our way, we met with Parmesh Shahani, the head of the Lab and after we hogged on the delicious lunch, he began with an introduction to the work that we do. 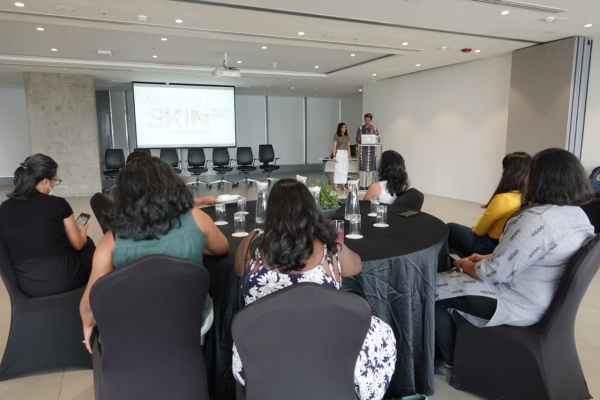 The presentation followed an informal discussion with the team and people on the trail about their thoughts on culture and spaces it occupies. The main reason behind choosing Vikhroli as the working space for India Culture Lab was to convey the idea that a single area of a city doesn’t define the presence of culture. A similar thought is also applicable to the trails organised as they explore the places in central and suburbs, dismantling the notion that only places in South Bombay are known to have cultural spaces. This walk reinforces that culture is present in all parts of the society. 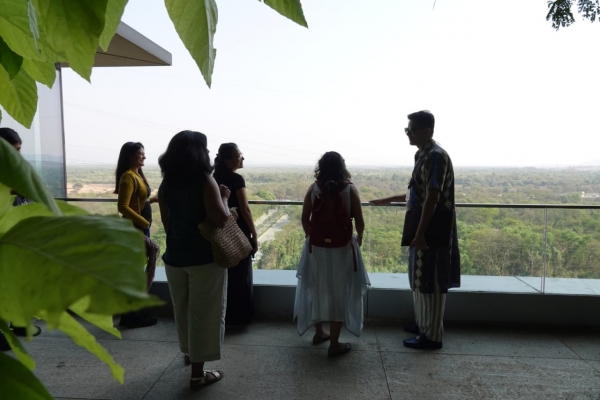 Inside Godrej One building, we enter a balcony filled with plants, and discover an excellent view of Vikhroli’ Mangroves below. It quite accurately juxtaposed the coexistence of natural and man-made cultures in one space. While walking down the atrium of the building, we saw various art installations and paintings on the walls of corporate offices. 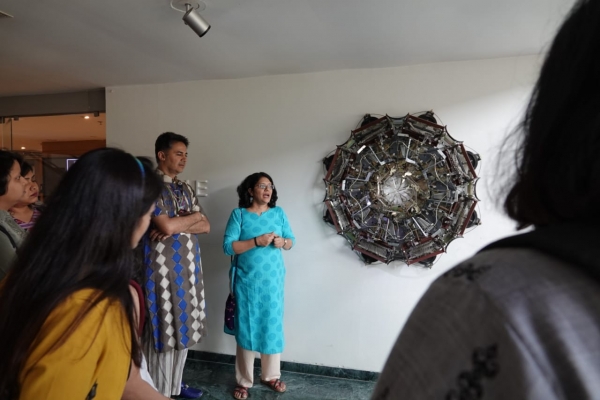 As we walked towards our next stop, Godrej & Boyce, we were greeted by a pleasant sight, a small pond in front with beautiful plants, flowers and two metallic birds hanging, made to seem like they were flying amongst the trees. We were welcomed by Nalini from Hubble and some more metallic birds spread flying around the wall, the entire installation part of ‘Sanctuary’ by Abir Patwardhan. We were fascinated by the space. On one hand we saw Mandala and The Lotus art pieces made out of typewriter parts, and on other hand we learnt about Hubble, a co-working space for corporates. 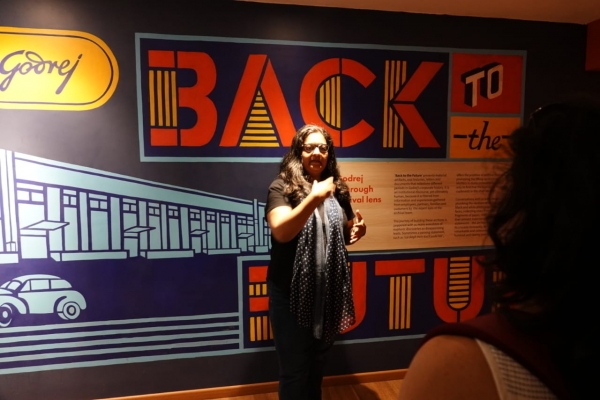 After we witnessed The Lotus bloom and set on a switch of a button, we moved on to our final stop on the trail - Godrej Archives. As we crossed a scenic route and reached the destination, we were greeted by Vrunda and Shweta of Godrej Archives. While on tours, most of the curators give out the instructions of not touching the items and documents on display, our hosts told us the exact opposite! They didn't want any of us scared of touching the artifacts. Our hosts welcomed our curiosity and questions. 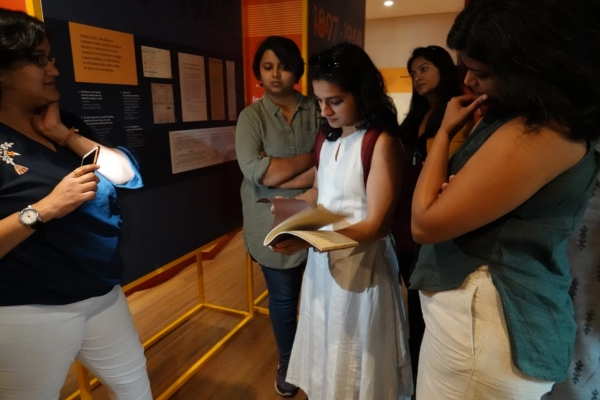 We learned about the history of Godrej and its products, the advertisements it undertook for the sales, interviews by owners. Along with this, we also learn about the production and sale of typewriters and how it impacted women's employment. In 1956, the first woman was hired by Godrej and the company had to learn quickly about separate toilets, maternity leaves and more. We also heard more anecdotes and narratives of women as a part of Godrej’s history, Madhubala advertising for Godrej products being one of them. Labbie Koninika Roy pointed out how both Vrunda and Shweta had weaved women narratives in a predominantly male-led company. To this they answer that they intend to show the feminine side of the company, how the values company have are feminine itself. 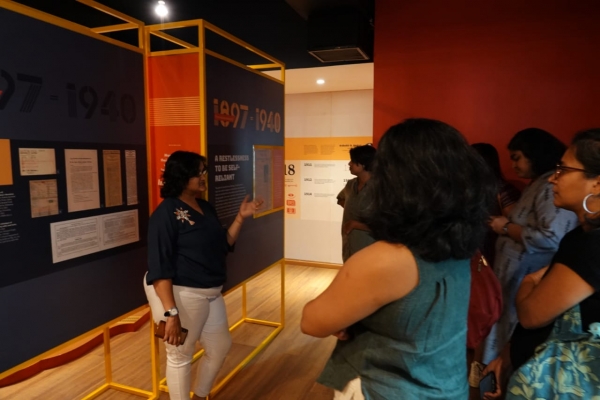 As we thanked Vrunda and Shweta for the extensive tour, they each gave us a copy of their book With Great Truth & Regard: A Story of the Typewriter in India. From Archives, we went to G5A for networking and drinks, followed by a Lal Ded performance play.

From B.E.S.T Museum to Godrej Archives, the Chalo Central trail dealt with the cultural history of art, corporates, public companies and nature all in one!