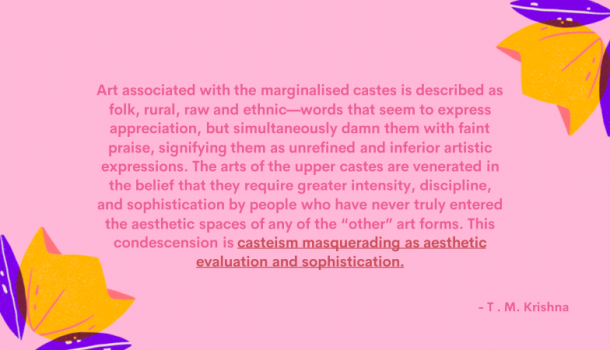 The idea of “popular culture” is not a homogeneous one, even what is and what is not ‘popular’ is drenched in systems of hegemony, political-economy, and certain historicity. When we ventured to understand the relation between caste and popular culture, this was the first dilemma staring us in the face. Popular can be about numbers, about subversion, about hegemony, about the workings of mass industry, about manufacturing consent or igniting dissent. It can mean so many things as Storey would have us believe, but not everything all at once. So what model should we work on? We then decided to explore what makes news as “popular culture” and expand into ideas of access, space and gatekeeping. 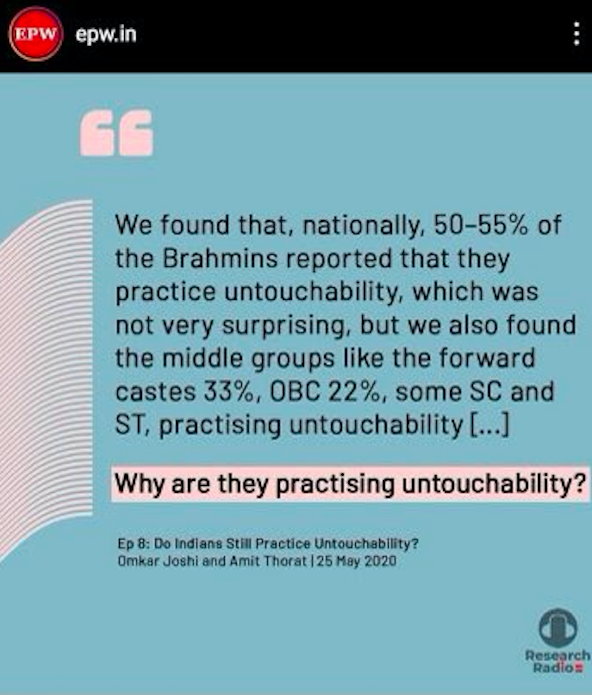 Elements in pop culture such as performance art, print media, and lifestyle choices are quite pervasive in nature and influence our choices and daily lives. However, major parts of the population and their experiences remain perennially outside of the ‘popular’ imagination. In this way, their marginalization keeps growing in different ways and the exclusion is visible when some spaces are created to specifically decentralize mainstream elements of pop culture and talk about the exclusionary forces. These were also examined by looking at food and other fashion aesthetics that are often viewed from a prejudiced lens.

A disparity between what is clean and pure and accepted versus everything else that is automatically viewed in contrast; ie. unclean, impure and unacceptable. These ideas of purity often get entrenched under the garb of “hygiene and health”. We examined how some restaurants have “Pure Veg Diet” declarations right at their entrance, and found a few examples which have casual references of caste as well which somehow seems to establish the credibility of the cuisine. Further, the discrimination and long-entrenched ‘legacies’ of people who are allowed to play instruments, and those who take up jobs of manufacturing without ever going close to playing them. The ideas of purity and pollution don’t escape from the arts either.

The Dalit-Bahujan community, encompassing several backward castes of the country is often only looked at as the victim or exoticized in pop culture. Their representation is seldom true of their lived realities and we wanted to explore ways in which this representation could be genuine and historical. We explored the forces which work to exclude by asserting their power in a hierarchical manner and how ‘castelessness’ is a matter of privilege, among other things, by taking prominent symbols in pop culture as case-studies. Language, cuisine, films, education, fashion, and aesthetics were five overheads that we explored trying to understand the caste defined skeleton that at times goes unnoticed.

The diversity of narratives is very restricted and the artifacts that do exist are heavily shrouded  by an upper-caste/savarna gaze. This gaze serves to either victimize, fetishize, or assert its own power while exploring the cultural narratives stemming from the Dalit-Bahujan community. Broadly, we looked into how this gaze also appropriates Dalit-Bahujan culture by making films and writing pieces without acknowledging the makers’ savarna privilege and in that sense, alters the telling of narratives of the marginalized groups. We read into popular works of literature that involved appropriation but reached the mainstream audiences very easily given the scale at which they were made. We further problematized this appropriation owing to how it alters and misrepresents people who should be given space to tell their own stories. It was essential to then look at how this space of sharing and validating one’s own experiences and ambition is structurally gatekept in several areas.

We looked at the representation of lower-caste women in Bollywood films and how their choice circle is defined and constrained by what they are ‘allowed’ to do. We tried looking at the hyper-sexualized portrayal of Silk Smitha and her construction as the vamp who does everything that the woman clad in modest sarees cannot while discussing the tenets of Brahminical patriarchy.

Further, we also discussed how the ‘high’ culture of a given ethnicity comes to represent the entire community. We used the film Gulabjam (2018) where the idea of ‘authenticity’ is directly related to what comes to represent the entire community. Such claims work to dismiss others as important and as valid experiences that have been traditionally treated as less ‘pure’ and less ‘authentic’.

Along with Gramsci’s idea of hegemony and Althusser’s Ideological State Apparatus, we also made use of the Purity v/s Pollution debate, to understand how caste-based discrimination works in modern times. We looked at how the social distancing mandate in COVID-19 times has turned into a way of discrimination along with the debate on veganism and its co-option as being ‘purer’ in principle and practice. Some other markers that we thought interesting to examine were caste stickers on cars, t-shirts, on restaurant boards, the idea of ‘pure’ language and the connotations attached with ‘Harijan’ a term coined by Gandhi to ‘purify’ Dalit-Bahujan people.

Politics was another aspect that came up in the discussion of popular culture, as the spectacle and structure of the Indian political system make way into not just most of the media artifacts but the daily consciousness of the people. Our point of contention lay with the communal binary perpetrating in politics today which oversees the caste faultlines within all major religions of this country. Not only does the binary conceal the bodies which bear the brunt in times of violence but also dismisses the Bahujan-Pasmanda solidarity against caste-atrocities.

Another point of deliberation was the rise of a certain form of machismo stemming from conservative and fundamental values. This with the rising violence in both spheres of religion and caste helped us understand how these structures constitute and serve an anxious and trepid form of masculinity. 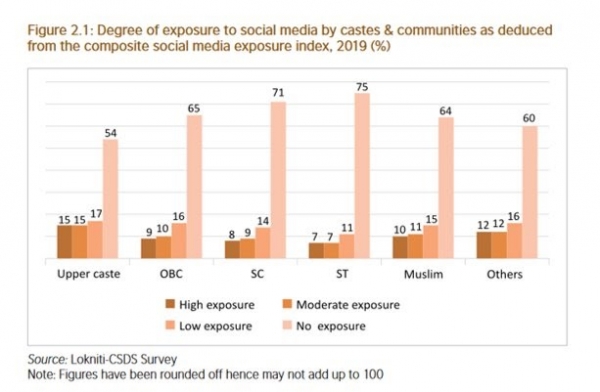 Another sphere we explored was the caste dialogue over the internet. Not only access over the internet traces lines of imposed caste hierarchy but even a huge population from Dalit-Bahujan communities with access to the internet are not able to extract its maximum benefits. As Anant Kamath and Vinay Kumar note in their article,

"The language of the internet, interpersonal social networks and valuable phone contacts, the affordability of mobile phone internet – all operate upon faintly perceptible but significantly strong enough caste biases"​

Moreover, even the social media platforms can actively support the caste hegemony as proven by #CancelAllBlueTicksInIndia campaign, where the Dalit-Bahujan users protested against Twitter’s verification policy which sidelined accounts of leaders and intellectuals of the community. Despite the systematic obstacles, many activists and individuals have used the Internet to educate, organize and agitate against caste dominance from the times of the early web.

We also tried to understand how caste and desirability interact over the internet referring to the work of Dhiren Borisa. As Dhiren notes, “sexuality in any form, heterosexual or not, is shaped by caste”. Caste becomes the language of desirability, which is gatekept not only through access to the internet in the age of online dating  but also through a performance of caste markers and identity through aspects like language, place, and profile aesthetics. Using Dhiren’s work we tried to understand how Dalit communities are discriminated against even in non-heterosexual spheres which claim to be progressive and how desirability is often framed in contrast to Dalitness.

Lastly, we tried to understand the scope and work of allyship in caste struggle. We went through Divya Kandukuri’s suggestions for understanding allyship and discussed the need for acknowledgment of social position in academics through Gopal Guru’s work, focussing on the ethical dictum of passing the mic.

“You’re casteist if you stay ‘complicit’ to injustice happening around you. And ‘complicit’ by encouraging or following theories of casteist writers, scholars, activists, individuals.”