Book Extract: The Ant in the Ear of the Elephant

Blog » Book Extract: The Ant in the Ear of the Elephant 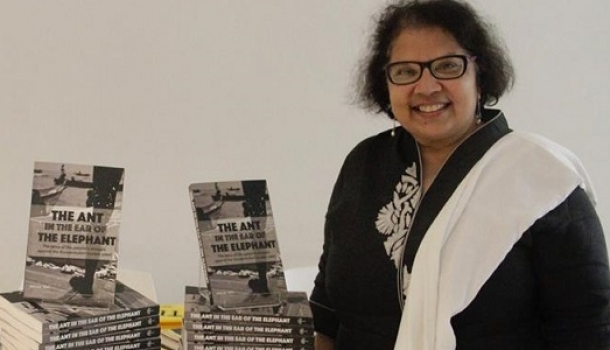 ……For 39-year-old Milret, participating in the anti- Koodankulam protests is something of a family tradition. She was 15 when her mother took her along for the first protest in Kanyakumari, in 1989. “The police beat us; they even used guns and one man was killed. Many of us were injured. I still have scars of the wounds caused when I fell as we all ran to safety,” claims Milret indignantly. Her mother used to sell crabs near the plant site and would watch scientists “take measurements” at the site, she says. “We were told it was being set up to produce ‘current’ and a job would be provided for one person from each house. Nobody ever mentioned it was an atomic plant and may be dangerous. And we knew nothing about radiation. At the time of the Kanyakumari protest in 1989 there wasn’t much media coverage either or television channels to broadcast our story to the world. Only when we saw what happened in Fukushima did we realise what could happen (here) and that our children may also be affected. I attended protest rallies in Kochi, Thiruvananthapuram and Koodankulam even before these tents were put up two-and- a-half years ago,” says Milret, gesturing at the pandal.

When her daughter turned 15, Milret brought her along to the pandal to sit in protest for the cause; she points to the church foyer and tells me they both slept there after getting hurt on September 10, 2012. “I escaped arrest that day only because I ventured into the water since I can swim. The four women ahead of me got arrested,” she tells me conspiratorially.

Like many others in Idinthakarai, Milret has not been able to leave the village because of the numerous legal cases filed in 2012—not withdrawn till date—though her daughter has gone off to study in college.

Vivacious and ever-smiling, she dismisses any suggestion of fatigue in sustaining this long-drawn-out battle. “We will protest until we die. Uday Kumar, Ryan and others have left their families to help us with this protest; they don’t go anywhere, they don’t earn money, they give their lives for the people. When I see such people around me I feel a boost, like drinking Horlicks,” she laughs.

Sitting quietly awaiting her turn, the far more sombre Mary presents an interesting contrast to Milret’s infectious enthusiasm. She too has been part of the opposition since the Kanyakumari rally of 1989. She tells me about innovative ways used by the protestors to “protect the whole of Tamil Nadu before it is destroyed”.

“When we became aware of the dangers we could not even think of letting go; instead, we fought harder. We tried various ways of agitating: for example, we brought our babies, approximately 40 of them below the age of one, to participate with us and fed them only sugar water,” says Mary as I wince in response.

She goes on undeterred: “We buried ourselves in sand up to our necks. We marched in protest from Koodankulam to Radhapuram, from Chettikulam to Levinjipuram to register our pain and anger, but still the government does not recognise it,” she says hopelessly.

Other forms of protest include lying prostrate on the road with children, candlelight vigils, tonsuring, blood donations, prayers at the cemetery, children’s walks, prayer meetings, numerous sieges at the plant—by land and sea—as well as jal satyagrahas and occupations of the seashore.

In keeping with the movement’s skills in using social media and the internet to spread their message to the world outside Idinthakarai, updates on the movement by ‘the women of Idinthakarai’ (as told to various writers) are regularly posted online (on Dianukeand other anti-KKNPP websites). These proved especially effective at the time of the police-protestors confrontation in September 2012.

The Ant in the Ear of the Elephant (2016) was published by Rajpal & Sons. Excerpted with the permission of the author.