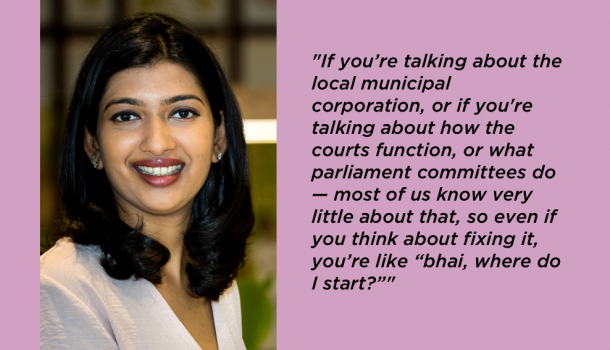 Our Lab team met MIT Media Lab researcher Anushka in 2018 when we collaborated for our first event together, ‘The Past, Present, and Future of Civic Entertainment in India’. The event marked the launch of the framework that uses entertainment media to encourage citizens to become active civic participants. We crossed paths again in 2019 for the event ‘Crime and Punishment in Indian Entertainment’, this time in collaboration with Civic Studios, Anushka’s brainchild and one of the most exciting media projects on the interwebs today. To speak more about the pioneering work that they’ve been doing in the Indian media landscape, Anushka joined us for a masterclass with our Leadership Programme batch of 2020 and a few Lab alums.

Anushka began the talk by harking back to her days growing up in the 2000s. She found that the atmosphere of India’s economic arrival - which was being popularised with the slogan ‘India Shining’ - stood in grave contrast with the violence that was unfolding in the country. She built a hypothesis towards this reality which said that if politics can be such a big part of the problem, and exacerbate existing cracks into wide divides, then politics can also be the solution for good and for bridging some of them. With this “naive hypothesis” as she calls it, Anushka started taking keen interest in reading up about political issues in India, and interning and interacting with activists and lawyers. This was followed by three years of field work with different NGOs in Maharashtra with the motive of working with communities to understand people’s experience of interacting with the government.

While working on the campaign of a political party for the 2014 elections, Anushka got the chance to witness citizen interactions with the state and politics firsthand. Through her journey in the political sphere, she realised how the political space was influenced more by the “actors” as opposed to the “stage”, an analogy that she uses while thinking about politics and civics. Things that are meant to enable good politics like public institutions, citizen accountability and citizen participation were weak in our country. She emphasised on the importance of the “stage” to be strong enough to ensure that no matter which “actors” occupy the political space, the quality of the democracy remains sustainable overtime. This led her to interrogate efforts that go beyond just electing good politicians, but also enquiring how we can invest more in building public institutions themselves.

The other realisation that came to Anushka post the elections was about the role of the media in shaping narratives, especially through channels such as Whatsapp, which normally carries  short-form content. Towards the end of the campaign, she got curious about how entertainment could be educative - at the time, Bollywood was on her mind for being a powerful shaping force for Indian ideas of democracy. On a quick Google search using the words ‘entertainment’ and ‘education’, she came across a plethora of writing that showed up as search results, such as the works of scholars like Albert Bandura. She then went on to study more about the influence of soap operas and their immense reach and impact. The average Indian with a television spent about four hours daily watching it, despite the rise of OTT web content, because internet remains inaccessible to a large part of the country. She spoke to us about how she spent the first week of her time at Ormax, an Indian firm focusing on media research and assessment, by watching “trashy” (we all have our judgements) yet highly entertaining soap operas. She then went on to do fieldwork to learn more about how the stories portrayed in these shows lead to internalisation of that reality through mimicry and admiration of characters that are depicted as the poster-child of positive behaviours and attitudes.

While this analysis was carried out through qualitative research, Anushka felt the need for an analysis based on metrics to assess the scale of media influence. This led her to pursue a masters’ in applied quantitative research at NYU, with a focus on applying it to media. By this time, she had already started conceptualising what would later become Civic Studios. The degree helped her navigate the media landscape more quantitatively, being both sustainable in terms of the robust skillset it offered as well as aligning with her passion project.

Her master’s dissertation was focused on how Indian media spoke of rape before and after 2014, looking at the way the narratives were framed. This led Anushka to her job at MIT which entailed doing media analysis with respect to narratives of civic and social issues in the Indian media. Even though the work was geared towards Indian news media, Anushka found a lot of support for work on entertainment media as well, and that led to the genesis of the civic entertainment project.

The project explored the intersection of civic participation and entertainment, with the aim of researching frameworks for civil action that can be replicated by everyday citizens. One such framing was the idea of ‘thin’ and ‘thick’ civics. While thick civics refers to actions such as leading full-time campaigns, thin civics includes efforts like signing a petition or showing support through social media. The latter often gets discredited due to the ease of doing those actions, but they perform the vital task of getting followers and supporters. To create these frameworks for the entertainment industry however was a challenge because of its perpetually competitive and crowded state. To this end, Civic Studios came into being with the aim of going beyond academic frameworks by producing content for civic entertainment. It was set up in Mumbai, as a for-profit, research-driven production firm.

Speaking about the need for producing research-driven content, Anushka gave the example of the movie Wall Street to talk about the dissonance between the intention and impact of media production. The movie, which was written to show the terrible financial culture that was developing on Wall Street, turned out to glamourise it which affected the culture even more negatively. The dialogue “greed is good” from the movie became a catchphrase for bankers to justify their ethics. To take cognisance of these negative externalities, Civic Studios focuses on audience research to ensure the well-researched content reaches the right target audience. If a movie, which is made with the target audience of  young people living in rural India is released on a platform like Netflix, it might receive accolades from the industry or support from international institutions like the UN or World Bank, but the impact on ground might be mismatched. Therefore Civic Studios considers it imperative to research audience, distribution data, the issues being addressed as well as the audience sentiments regarding that issue. The content is designed by understanding the spectrum of ‘awareness, to inspiration, to action’, and locating narratives that could potentially push the audience to the next stage.

Apart from production-driven research, Civic Studios also takes up work that is oriented more towards media studies. One such project was their report on crime and punishment in Indian entertainment, which was launched at the Lab in 2019. The report analysed the representation of the courts and police through a sample of Indian movies, TV shows and OTT web series. Some of the metrics that were used included the glorified depiction of, and the audience’s perception regarding vigilante killings (People who had watched Simmba were a lot more likely to support vigilante killings by the police in real life than people who hadn’t), and the identities of the characters of senior police officers, lawyers and judges (unsurprisingly being male, upper caste and Hindu).

On the production side of Civic Studios’ work, the process begins with both primary and secondary research. Then the message is designed followed by concept and scripting, production, distribution, with a follow-up element of campaign and advocacy to ensure targeted outreach. The format of the content is divided broadly into three buckets. There’s short form content which they have been producing with their non-profit partners, like their ‘Policing in a Pandemic’ video with the Indian Police Foundation which was circulated through a WhatsApp network over 30 lakh police officials. The second is their upcoming Hindi digital brand designed for young people between the ages of 18 to 24 in tier 2 and tier 3 India, consisting of entertainment-first stories with civic themes. The third is long form civic content, most of which currently is focussed on domestic violence and gender laws pertaining to domestic violence with the aim of learning where and how they can be strengthened. There’s a web series designed for citizens to learn more about the choices and frameworks that are available and how to access them, and a short film for the legal community which focuses on issues regarding delivery of justice.

For Civic Studios, their main focus of civics is on public institutions. A lot of developing countries facing issues of poor governance, social inequality and economic inefficiencies often have weak public institutions. Some aspects can be given up on, while others can be worked on to build more trust and efficiency. In an ideal scenario, citizens ensure accountability by asking questions and giving feedback, while from inside the system work is done on more capacity-building measures. While these may seem like easy things to do in theory, there are often a lot of barriers to enable this kind of functioning.

To explore these challenges, Civic Studios have identified three key problem statements on the citizen’s side. The first is limited knowledge about the public institutions around us. Most of us might not know a lot about how local municipal corporations or the courts or parliament committees function. It’s complex and overwhelming to even begin any exercise to create change. This is where media can help by creating digestible forms of knowledge. Anushka gave us the example of shows like Madam Secretary or Parks and Rec which take us a little bit closer to what happens inside, familiarising us with that world.

The second issue is very low trust in these institutions owing to bureaucratic inefficiency or corruption. In systems riddled with seeming impossibilities, Anushka borrowed the term "bright spots" from one of Civic Studios’ partners, Agami. The term refers to trustworthy persons within these systems who are more likely to support changemaking measures. For example, every court might have one judge at least who is a beacon of progressive thinking. The same goes for their equivalent in every bureaucratic department. One can rely on these bright spots to at least spark change that might lead to a larger overhaul gradually.

The third problem statement that Anushka spoke about is the lack of self-efficacy. There is often a sense of defeat when the responsibility of creating systemic change lies on one person or a small group of people. To address this, Civic Studios are trying to model different civic movements, social movements, activist strategies, etc. both on the side of thick civics and thin civics. The aim behind this is to inspire people to take actions ranging from designing full campaigns, to things that they can do if they've got a 9-6 job and have only so many hours in a week that they can give to even thinking about civics.

The talk was followed by questions about the glorification of policing in Indian cinema, the psychological effect of movies that equate vigilantism with righteousness, the challenges faced by Civic Studios in determining how to design their content targeted towards specific audiences, and more. Anushka concluded the class by quoting Eric Liu, founder of Citizen University - “You are more powerful than you think,” which perfectly captured the mood of the (virtual) room after learning about the kind of exciting and resourceful work being done by Civic Studios.