Spatial justice and the city

Blog » Spatial justice and the city When elaborating upon matters of spatial justice, naturally, the question of space arises. Should we regard only matters of built spaces, or should we also elaborate upon ensuing issues and repercussions of the way built and unbuilt spaces have been marked out in the city? In this study, Kshiti and I explore the latter point as our focal investigation, keeping in mind a chronology of events that led to the aforementioned. The antithesis of a planned city, Bombay’s growth was a gradual and stochastic one. Here's a rough timeline:

Colony of The Portuguese - 16th Century

This date line roughly marks the significant changes in the city, right up to the late 19th century, and branches out to topics and sub-topics we found necessary to incorporate into the study, such as:

These broader intersectionalities continually funnel down into relatively smaller and denser interlinks. When examining the structure of our city we tried to look at who this structure caters to. On reading about the organization of Dadar, as the city’s first suburb, we came across the colonial origins of the town along with its settlements being built by and for the middle class. We looked at various events that changed the map of Mumbai, literally and figuratively. The 1991 economic reforms expanded the already burgeoning middle classes further marginalizing every other class that was unable to “fit in”. Shortly after, the 1993 riots in the city worked to create a huge divide between the Hindu and Muslim communities and this resulted in seeking spatial proximity based on communal lines. This gave rise to townships like Mumbra to become a densely populated Muslim area, due to the migration of Muslim populations there. The socio-spatial implications of these riots and the movement that they brought along, included the fragmentation of the entire city and its spirit, that of being a place for anybody and everybody.

We went on to explore the protest culture in and around the city and how Azad Maidan has come to become an epicenter of protest. We took the examples of the Kisan Long March and the anti-CAA protests. Along with this, we also looked at how the Aarey conservation protests were organized on-site and didn’t need to be brought to “town”, thus accessing and claiming space in the most impactful way possible.

Further, we examine how intersectional identities access any given space differently. Here, we specifically referenced the paper “Why Loiter- Gendered Dissent” (Melissa Butcher, Selvaraj Velayutham) which largely looked at two things: the language of accessing space and how the demonstration of respectability and consumption (by women) feed into their perception by the public. This seems to allow for better and larger access to public spaces.

Taking this discussion further we also attempted to read into the other large and largely marginalized class- the working class. More specifically the class that is made to live in “informal” settlements which are oftentimes illegal. In this regard, we reviewed three main issues: slum ‘rehabilitation’, structural violence, and stunted economic mobility.

Additionally, we sought to understand the apparent class divide and discriminatory lenses that have led to the creation of red-light districts in the city, such as Kamathipura (the oldest of such areas in the city) along with zones in Girgaon, Phanaswadi, and Oombarkhadi. Using “Bombay Before Mumbai” (edited by Prashant Kidambi, Manjiri Kamat and Rachel Dwyer) as our key reference, we understood that these were a small-but-not-so-insignificant exception to the binary that placed the ‘European’ sector to the south and the ‘Indian’ or ‘Native’ sector to the north of the fortifications in the colonial era. Apart from present issues of gentrification that tend to endanger previous inhabitants, we also looked at the elements that gave way to the creation of Kamathipura. The mass influx of mill workers that came with the establishment of the textile mills during the ‘Cotton Boom’ led to the  generation of a casual economy of brothel shops, gambling dens and liquor stores - some of these exist to this day. Geographically, we see that such areas were always in close proximity to busy market areas. The growing cost of real estate has witnessed a shift of sex work from Kamathipura to Turbhe and Thane due to rent prices, recreating a similar economy in a new locality.

Displacement of entire populations under the Slum Rehabilitation Authority (SRA) schemes takes place through rehabilitation of their pre-existing living conditions. However several archives suggest that this ‘rehabilitation’ is not followed-up very well, with insulting levels of the dearth of basic amenities- taps, elevators, electricity, and water supply. In such conditions with additional maintenance costs often unaffordable, residents are forced to re-migrate to their places of origin. Given the array of stakeholders under the SRA schemes, several of their agendas often appear at odds with each other and do not align. This gives rise to structural violence, often institutionalized, seldom addressed. Further, with respect to the promised economic mobility, barely any movement takes place given the heavy costs that water down the impact of any kind of rehabilitation that the state may have attempted. 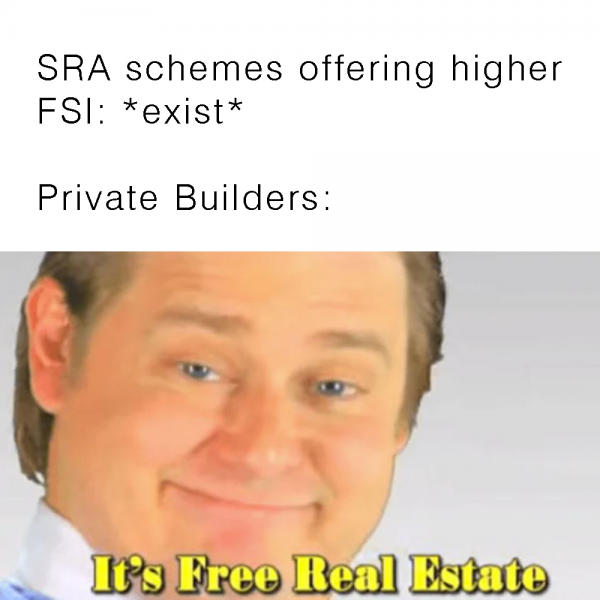 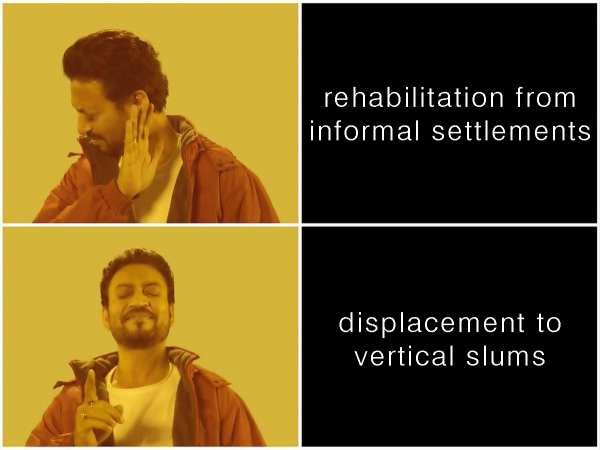 An ongoing ‘storey’ of social stratifications and spatial negotiations seems to have co-existed by working out loopholes. An example of it is, working around the 1930 amendment to the Suppression of Immoral Trafficking Act), these businesses have witnessed the loss of core-clientele amid the Covid-19 lockdowns.

Coming to the saga of the bubonic plague to an ongoing pandemic,  we observed the creation of the ‘Bombay City Improvement Trust’ which outlined several key laws such as the 63.5 degrees light rule, the Sanitation Objective, re-calibration of the Princess Street and Phirozeshah Mehta Road to channel the sea air into the centre of the crowded residential areas, and the design of the Chawl window. This was done with the help of Kamu Iyer’s: “Boombay - From Precincts to Sprawl” as well as Rahul Mehrotra & Sharda Dwivedi’s: “Bombay - The Cities Within”.

Given the COVID-19 times calling for urgent and immediate action, we also reviewed a paper that had recommendations for reforms in the public health infrastructure, to better address the issues of community transmissions in slums. Some of these recommendations include deploying mobile clinics for immediate redressal of medical issues. It is also essential to train community health workers before the onset of community transmissions for immediate help to be relayed. Finally, we concluded this topic with our imagination of a post-pandemic world; one full of sustenance and empowerment. One where inclusivity is not limited to introducing “touchless” technology but goes far and beyond to ensure the adherence to physical distancing norms without any communal connotations.

This was our exploration into our city’s ever-evolving landscape. We hope that we were able to do (spatial) justice to the topic at hand!