Lab head Parmesh Shahani’s new book Queeristan traces his journey of advocating for LGBTQ inclusion in corporate India, spanning across boardrooms, business schools, college campuses, cultural spaces, in global conferences and more. In this excerpt, Parmesh reminisces about the people who have inspired his efforts as well as influenced his approach to authoring this book.

For me, the greatest gift of the life I have lived has been the people I have met along the way.

Essam Daod, who is a big fan of India and Bollywood, grew up in a small Arab village in the Galilee, and currently stays in Haifa, Israel. He is a trained child psychiatrist and psychotherapist. He told me at TED 2018 in Vancouver about how he travelled to Greece in November 2015 to provide psychosocial support to Syrian refugees who were landing there by the boatload—this was at the peak of the refugee crisis in Europe. However, a few hours after he reached, he was literally in the water, unsuccessfully trying to revive a dead Iraqi woman. He told us about how he went through the routine of providing CPR to her, even though he knew she was dead, because her family had been waiting for around four hours for a doctor, and they would not have been able to accept it had he told them right away that she was dead. Essam realised from his experiences early on that mental health needs to be at the forefront of humanitarian aid, next to other basic needs like water, food and shelter. So three months later, in his small flat in Haifa, he and his wife started their own humanitarian aid organisation, Humanity Crew.

This is one of the very few organisations that provides mental health and psychosocial support to refugees and displaced populations, and in their own language. People who are on refugee boats see so much horror before leaving their homes and also during the difficult journeys they take. And when the boats land, they face an uncertain future. It is not as if the countries they reach on the boats are waiting with open arms to welcome them. In the midst of all the turmoil, folks like Essam are trying their best to ease their suffering.

Ahmed Kathrada or Uncle Kathy, as he is lovingly called by all who know him, has been another of my heroes. One cold June in 2015, I was sitting in a tiny room in a cell block on Robben Island off the coast of Cape Town, listening to him talk to me and my Young Global Leaders classmates about the twenty-six years he had spent as a prisoner alongside his close friend Nelson Mandela, eighteen of those years in the very cell block that we were in. They were seven prisoners together, Uncle Kathy told us, and they had felt they would certainly be given the death penalty in what is famously known as the Rivonia Trial of 1963–1964. Instead, they were sentenced to life imprisonment on this isolated maximum security prison off the coast of Cape Town. Uncle Kathy was the only Indian in the group.

There was segregation everywhere, even in the prison. The black prisoners got less food and had to wear short pants as compared to Indian, mixed race, ‘coloured’ or white prisoners. But Uncle Kathy’s group was united, performed small acts of resistance all the time and continued to struggle peacefully for what they wanted. So after fifteen years in prison, they finally won the right to get newspapers, and after twenty years, they got television. Slowly, they were allowed to write and receive more letters, and could have more visits from relatives and friends. After twenty-five years in prison, he was writing forty letters a year. ‘Our spirits never went down. We knew we would definitely win some day.’

As a form of torture, they were made to work with just picks and shovels in the salt mine on the island, he recounted, and even though this often gave them blisters on their hands and they bled, they still preferred it to being locked up in their single cells. When I heard about how Mandela couldn’t bear light for the rest of his life, because his eyes had been damaged due to exposure in the mines, I asked Uncle Kathy: ‘Don’t you ever feel vengeful? They wronged you all so much… took away a large part of your life.’ ‘No,’ he replied emphatically. ‘Revenge is pointless.’ To create an equal country and an equal world, he said, there has to be forgiveness and an absence of hatred. People who harbour negative emotions like anger or bitterness suffer more than the people towards whom these feelings are directed, he cautioned. ‘In any case, a lot of work still needs to be done in South Africa and the world. There is no dignity in poverty; there is no dignity in hunger.’

Uncle Kathy used his time in jail to earn bachelor’s degrees in history, criminology and bibliography as well as honours degrees in history and African politics from the University of South Africa. After his release from prison, he served in the Mandela government as a minister, but then retired from active politics to focus on his non-profit work. On the boat ride back to Cape Town, he told me about receiving the Pravasi Bharatiya Samman from the Indian government in 2005, and his India trip again in 2014 to attend the 125th birth anniversary celebrations of Jawaharlal Nehru on the invitation of Sonia Gandhi. He told me that he would come back again, but he passed away in 2017 before he could fulfil this promise. I learnt so much about resilience from that one day I spent with him.

After Divyanshu Ganatra lost his eyesight at the age of nineteen, he got a lot of unsolicited advice from well-meaning people on what a visually impaired person should and should not do. He paid this no heed, thankfully, and has over the years raked up an impressive list of firsts: India’s first blind solo pilot and the first blind tandem cyclist to complete the more than 500 kilometre-long ride from Manali to Khardung La, to list just two. Now he runs the Adventures Beyond Barriers Foundation, a non-profit that promotes inclusivity for people with disabilities through adventure sports. We were honoured to have him at our Culture Lab in 2018.

Another Culture Lab speaker, Bunker Roy, served me a personal jolt of adrenalin when he visited our lab in 2015. Educated at Doon School and at New Delhi’s St Stephen’s College, Bunker would have had a regular privileged career had he not visited Bihar post the 1960s famine and witnessed the abject suffering of the rural poor there. In 1971, Bunker created what is now called the Barefoot College in Tilonia, Rajasthan, as his attempt to find solutions to many rural problems, and since then, the institution has trained more than three million people in acquiring skills they can use to generate income and respect for themselves. 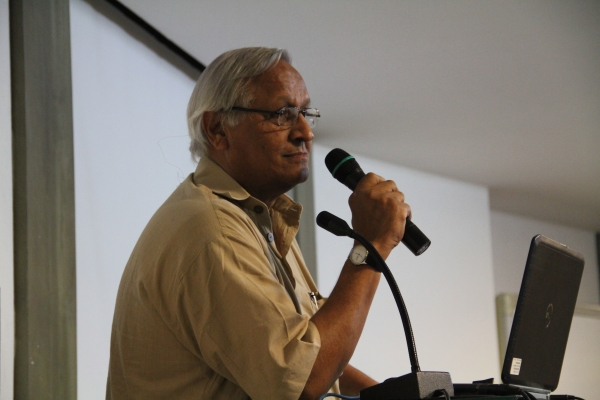 The college’s methodology is radical. They only take illiterate and semi-literate people, often from the lowest castes and from the most inaccessible villages in India, and transform them into water and solar engineers, architects, teachers, doctors, IT workers, accountants, teachers and other professionals. These barefoot experts then go on, as catalysts of change, to transform their own village communities. The college is Gandhian in its approach, with everyone eating, sleeping and working on the ﬂoor and it does not grant any paper degrees. It instead values traditional and local knowledge more.

Tilonia today has its own telephone exchange, speed post office and six solar-powered plants—it is the only fully solar-electrified campus in India. They have community radio, their own dentists, acupuncturists, physically challenged pathologists and much more. Bunker’s home is a dream world. He was named by Time Magazine as one of the 100 most influential people in the world in 2010.

My friend and Yale World Fellows senior classmate Chetna Sinha is doing equally inspiring work through her Mann Deshi Foundation in rural Maharashtra. The foundation has already changed the lives of more than about 400,000 women who live around the Mann taluka. Mann Deshi’s multitude of activities include an all-women-run bank, some business schools for rural women, the first chambers of commerce for rural micro entrepreneurs, a community radio service and water conservation and sports programmes … and they are only just about getting started!

Winner of the Ramon Magsaysay Award, the legendary P. Sainath needs no introduction, but if you still haven’t heard of him, go get yourself a copy of his classic Everybody Loves a Good Drought or, better still, log on to the People’s Archive of Rural India (PARI) (ruralindiaonline.org/)—his volunteer-driven initiative. PARI is already the biggest repository of information and stories about rural India—and like Chetna’s Mann Deshi, they too are only just about getting started with all their ambitious plans.

When Sainath spoke at our Culture Lab in 2017, he gave us some pretty sobering numbers about the lack of representation of rural India. ‘Seventy per cent of our country lives in rural India but if you study the news coverage from the source-of-origin point of view, rural issues account for 0.76 percent. If you look at it from the content point of view, this becomes 0.18 percent … and even when agriculture is covered, it is about covering what the agricultural ministry does, and not the ground reality of farms and farmers.’ When asked why, he spoke about how large media houses had concentrated ownership over the years in our country, and driven purely by the profit motive, they didn’t believe that news about rural India would appeal to advertisers. ‘This is why there are news outlets that cover golf but not agriculture or labour issues!’

While Sainath’s numbers were bleak, his attitude was not. ‘Somewhere between cynical pessimism and blind optimism, there exists an island called hope. I live there.’ From this island of hope, he and his team have created PARI—which is both an archive and a living journal of the amazing changes taking place in rural India today.

I am sure you must have seen Priyanka Chopra’s film The Sky is Pink, based on Aisha Chaudhary and her mom Aditi Chaudhury. In December 2011, I was dancing alongside Aisha and another personal hero, Thermax’s chairperson Anu Aga, under a moonlit sky at the City Palace, Jaipur. We were at a grand dinner to celebrate the INK conference. Aisha, who was fifteen then, only had a 40 per cent chance of survival at that point, but her incredible spirit had charged the entire conference right from day one. ‘My soul would have no rainbow if my eyes would have no tears,’ she had told us earlier in the day, and as we danced happily, I thought of how blessed I was to be in this moment.

The feeling of being blessed continues. Where I stand right now in my life, I stand full of gratitude. I think of all the privileges I have as an opportunity to serve.

Excerpted from Queeristan: LGBTQ Inclusion in Corporate India by Parmesh Shahani, published by Westland Publications. The book will be out on 17 August 2020.