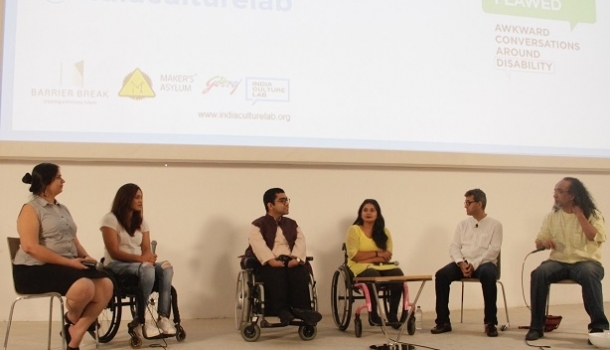 The Freedom to be Flawed - Awkward Conversations around Disability

The Godrej India Culture Lab was proud to present an evening talking about access, inclusion and disability.

For persons with disabilities, often they can’t have conversations with the rest of the world about being disabled. Perhaps that’s because it’s uncomfortable for those of us who are able-bodied: we’re scared of being offensive or hurtful, or embarrassed to come across as ignorant, or vaguely guilty about not having a disability. And perhaps these things are because most able-bodied people have never met or meaningfully interacted with persons with disability.

So let’s rephrase that.

Let’s listen. Let’s start to understand how we do not think enough about how we often exclude people whose bodies do not work the way ours do in some way. And let’s not fall into the easy traps of either putting people with disabilities on a pedestal or making disability invisible.

The event featured a special performance by Nidhi Goyal, India’s first female disabled comedian and director of the non-profit Rising Flame. It also had Barrier Break’s exhilarating games and Maker’s Asylum’s cool printer where you can print your name in braille on a pendant.