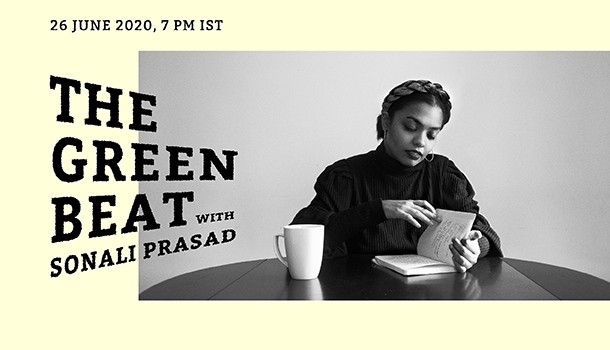 This month at the Lab

The Green Beat with Sonali Prasad

A retrospective exploration with Sonali Prasad on intersectional environmentalism, conservation, and immersive storytelling.

In this special virtual lecture, she looked back at her storytelling work to see what was done and what could have been done differently to lend to more inclusive, ethical, and sustainable narratives.

She looked at examples from other collectives and individuals that remind us how climate change and environmental justice are not siloed issues — how the movement has always been about protecting the planet and the people. She will unpack the need for long-term projects and diversity in storytelling as a personal reflection, that is, how do we go beyond ‘parachuting’ and make space for communities to tell their own stories.

The Green Beat was supported by the India Climate Collaborative.

About Sonali Prasad:
A freshly minted Knight Science Journalism Fellow from the Massachusetts Institute of Technology (MIT) in Boston, USA, Sonali Prasad has worked on climate and environment stories across different forms, from print, video, data to art, and installations.

She has previously worked as an investigative reporter at Columbia University’s Energy and Environment Project and her work has been published in several outlets such as The Washington Post, The Guardian, Hakai magazine, etc.

Her team’s series on the Obama administration’s investment in foreign fossil fuel projects won an Honorable Mention at the Society of Environmental Journalists awards. For the series, she reported from Singrauli, India.

She is a former Google News Lab Fellow and Pulitzer Traveling Fellow. Her project in India on forest rangers funded by the Pulitzer grant was exhibited at the Jor Bagh metro station in New Delhi amongst other outlets.

One of her first experimental collaborative projects, RE(ef)SOURCE, entailed pulling out coral reef health metrics using fluorescence data from citizen-sourced underwater images. This project added a new dimension to climate change stories by empowering journalists and local diving groups to deploy their own sensors and tools for collecting data directly from the environment, enabling a new type of environmental interview.