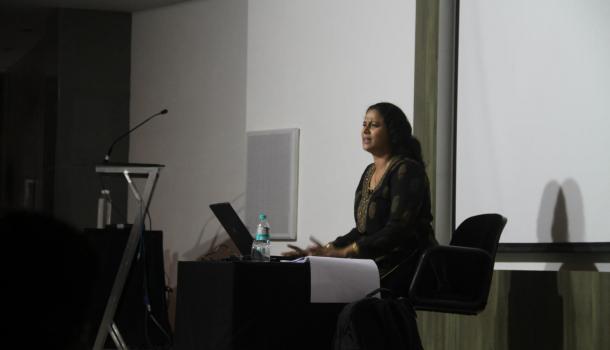 Ek Madhav Baug is a pioneering Marathi language play by the late Chetan Datar that was enacted on stage by Mona Ambegaonkar in Hindi. (It has been translated into Hindi by Mona Ambegaonkar and Vivek Anand.) The play is seen from the point of view of a mother who discovers that her son is gay and through his diary, relives his journey of discovery of his own sexuality. The moving performance at Godrej India Culture Lab was followed by a discussion with the actor and CEO of The Humsafar Trust - Vivek Anand.

Mona Ambegaonkar made her debut as an actress and model in 1990. Since then she has acted in over 18 films including critically acclaimed movies like Mrityudand, Hazar Chaurasi Ki Maa, Mangal Pandey, Phir Bhi Dil Hai Hindustani and the trend setting Marathi movie Bindhaast for which she won a Critics Choice award. On television she has acted in popular serials like Dhadkan, CID and Maryada: Lekin Kab Tak? Her theatre credits include works with Nadira Babbar, Makarand Deshpande, Rajit Kapur, Tom Alter and Vijay Kenkre. She has also written and acted in her own production at the Fringe Festival in Edinburgh, Scotland.