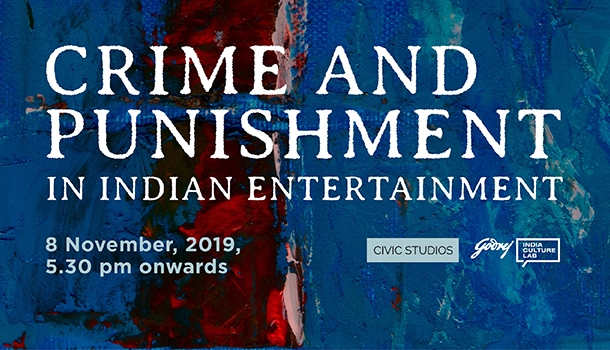 Crime and Punishment in Indian Entertainment

The Godrej India Culture Lab and Civic Studios organized an event in Mumbai to explore the portrayal of crime and punishment in Indian mainstream entertainment, and its role in modern democracy building.

Our event, ‘Crime and Punishment in Indian Entertainment’ in collaboration with Civic Studios was an incredible evening of learnings about the ways media narratives influence citizen perceptions. The event looked into how entertainment shapes our understanding of the world, and influences our perceptions as citizens towards government and public institutions. The event thus marked the launch of a research report published by Civic Studios which explored the ways in which films, television shows, and digital content in India represent the good, bad, and ugly of legal and police institutions.

We started the evening with an insightful report launch by Civic Studios that analysed representation and democracy-building in Indian police and courtroom dramas. We then had an absolutely engaging discussion between Dipti Nagpaul from The Indian Express with S Hussain Zaidi, former investigative journalist and author of Black Friday: The True Story of the Bombay Bomb Blasts, where they spoke about storytelling and writing non-fiction crime. Hussain also launched his latest book, Class of 83 at the event.

The finale to the evening was a spectacular panel discussion on the reel and real of crime and punishment featuring Devika Prasad from the Commonwealth Human Rights Initiative, Neeraj Ghaywan, National Award-winning director of Masaan and Sacred Games 2, Esha Paul, director of VICE India's क Se Crime and human rights lawyer Vijay Hiremath.

The event also hosted two amazing art exhibits including ‘Azad’ by Sahaara Charitable Society and ‘Letters From India’s Death Row’ by Project 39A.