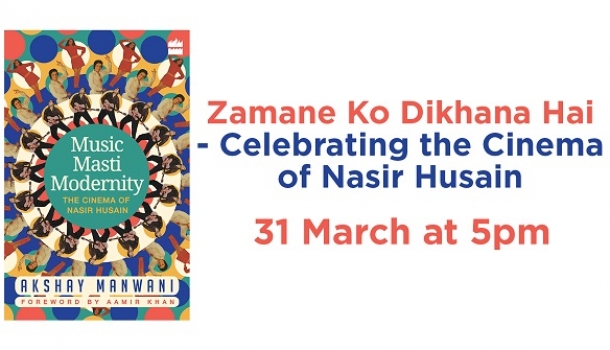 The Godrej India Culture Lab was proud to present Zamane Ko Dikhana Hai - a celebration of the joyous cinema of Nasir Husain with author, journalist and editor Akshay Manwani.

Through his presentation, Akshay took the audience through some of the finest moments in Husain’s cinema, explaining the filmmaker’s craft. Contextualizing each of the sequences, Akshay talked about how Husain was one of the finest auteurs in the history of Hindi films.

After his talk, Akshay was joined by Rohini Ramnathan, an internationally acclaimed radio presenter with over a decade of experience on the airwaves across Mumbai and Singapore. She currently hosts the zaniest retro Bollywood show on Radio Nasha 91.9 FM every morning.

As a special addition to the evening, we had The Revolver Club spinning some of the choicest tracks from Nasir Husain’s films.

About Akshay Manwani:
Akshay Manwani turned to freelance writing in 2009. He has since written on Indian cinema and popular culture for a variety of publications such as The Caravan, The Indian Quarterly, Scroll.in, Mint, Business Standard and Mumbai Mirror. He is also the senior editor for nba.com. Akshay’s first book, Sahir Ludhianvi: The People's Poet, was published in December 2013 by HarperCollins Publishers India. In 2014, Akshay won the RedInk award for Best Lifestyle and Entertainment Story, given by the Press Club Mumbai, for his detailed feature on B.R. Chopra's Mahabharata television series. His second book – Music, Masti, Modernity: The Cinema of Nasir Husain – has been published by HarperCollins India in October 2016. The book won the Verve Storytellers Award for Best Book of 2016.