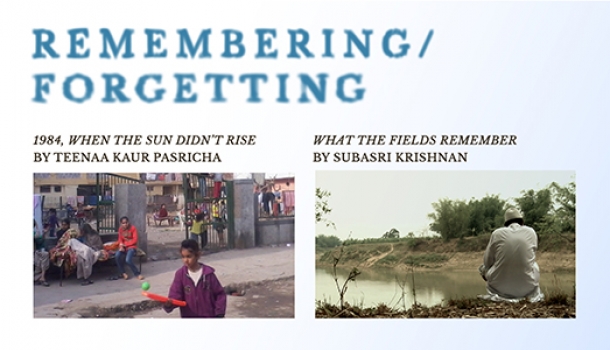 The Godrej India Culture Lab hosted Remembering / Forgetting, a sombre reflection on our country’s forgotten histories through the screening of two documentaries.

It’s been 34 years since the Nellie Massacre in Assam and 35 years since the anti-Sikh riots. These violent events seem to be erased from our collective memory - however, it is important to remember so we can be better.

In 1983, more than 2000 Bengali speaking Muslims were killed in the town of Nellie and its surrounding villages in Assam in less than six hours. What the Fields Remember by Subasri Krishnan explores the massacre in Assam from the survivors retelling of the event, and attempts to explore ideas of violence, memory and justice.

In the following year, almost 30,000 Sikhs were killed all over India by violent mobs after the assassination of Prime Minister Mrs. Indira Gandhi. 1984, When the Sun Didn’t Rise by Teenaa Kaur Pasricha follows a group of women from the Sikh Widows Colony tracing their journey of loss and bravery through the 1984 Sikh massacre.

The film screenings were followed by a conversation between the filmmaker Teena Kaur and the audience.

Every evening women from the Sikh Widows Colony bond and share their memories. They lost their men who were daily wage earners in 1984 when almost 30,000 Sikhs were killed all over India by violent mobs after the assassination of Prime Minister Mrs. Indira Gandhi by her Sikh bodyguards. Three decades later, a journey begins to connect with the women and children living in a Sorority and a ghetto of a kind to know the impact of violence on their lives. The film is a slice of life of three brave women who negotiate their memories each day to live and earn bread for their families while fighting for justice.

Teenaa Kaur Pasricha is an award winning film director and screenwriter. 1984, When the Sun didn’t Rise is the recipient of National Film Award for the Best Investigative film in 2018. She was awarded a screenwriting fellowship by Time Warner foundation supported Asia Society, New York for her first feature film screenplay The Red Autumn.

About What the Fields Remember

On 18th February 1983, from 9:00 am to 3:00 pm, more than 2000 Bengali speaking  Muslims were killed in the town of Nellie and its surrounding villages in Assam, India. People’s homes were burnt down and their fields destroyed. Till date the Nellie massacre, remains on the margins of India’s public history, and is virtually wiped out from the nation’s collective memory. The documentary film What the Fields Remember revisits the massacre three decades later. From the survivors, Sirajuddin Ahmed and Abdul Khayer’s, retelling of the event, the film attempts to explore ideas of violence, memory and justice. What the Fields Remember also attempts to raise larger questions around collective memory – of what we choose to remember and why we choose to forget.

Subasri Krishnan is a filmmaker and also heads the  Media Lab at the Indian Institute for Human Settlement (IIHS), an educational institution that works around the urban. She also teaches and curates the Urban Lens  film festival. Her first film Brave New Medium on internet censorship in South-East Asia, has been screened at film festivals, both nationally and internationally. Her last film What The Fields Remember on the Nellie massacre that took place in  Assam in 1983, explores ideas of memory, violence and justice through survivors’ narratives.