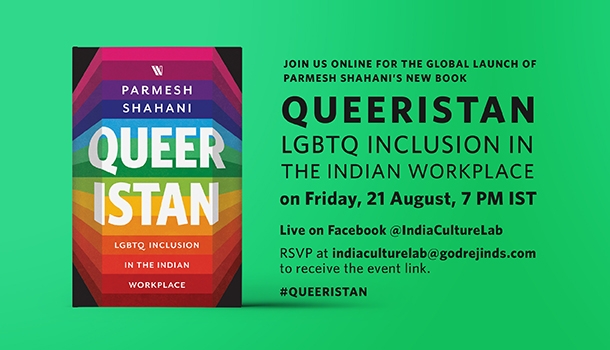 We hosted the global launch of Parmesh Shahani's Queeristan: LGBTQ Inclusion in the Indian Workplace. We were joined by Grace Banu, Rafiul Alom Rahman, Neelam Jain and Ritesh Rajani for a power-packed adda on Queer Futures following the launch of the book.

Queeristan traces Parmesh’s journey of advocating for LGBTQ inclusion across India’s boardrooms. Parmesh has been witnessing change first hand across business schools, college campuses, cultural spaces, in global conferences, as well as right here in Mumbai. Filled with testimonies of people at the vanguard of the LGBTQ rights movement in India, this genre-bending book brings together stories, history, politics, nostalgia, and a vision for the road ahead.

The launch was followed by an adda on Queer Futures with some of the young voices featured in Queeristan, talking about their work and sharing their hopes for the future of queer citizens in India. We were joined by writer, activist, and founder of the Trans Rights Now collective Grace Banu, founder of The Queer Muslim Project Rafiul Alom Rahman, founder of PeriFerry Neelam Jain and the co-founder of Diversity Dialogues & the founding geek of incluzive.tech Ritesh Rajani.

Parmesh Shahani is Vice President at Godrej Industries Ltd. and the head of the Godrej India Culture Lab. Parmesh is a passionate advocate for LGBTQ inclusion in corporate India and has guided many of the country’s leading companies on their inclusion journeys. His first book Gay Bombay: Globalization, Love and (Be)Longing in Contemporary India (Sage Publications) was released in 2008. Parmesh holds an MS in Comparative Media Studies from MIT. He is a TED Senior Fellow and in the past has been a Yale World Fellow and a World Economic Forum Young Global Leader.