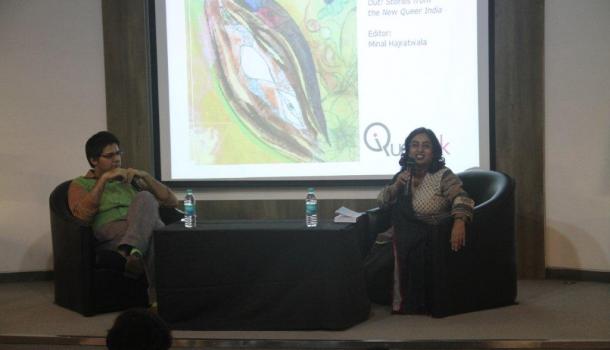 In Bengalaru, a law student falls in love as the nation’s highest courts decide whether his love is legitimate. In Mumbai, a film star and a parent discuss their own journeys of "coming out" as advocates of the lesbian, gay, bisexual, and transgender movement.
In rural Kerala, two girls row a small boat and feel their hearts opening, even as they outgrow the village that is their only home. These are the lives of queer Indians today: poignant, gripping, and occasionally even hilarious.

The thirty true and fictional stories in this book give voice to the characters behind the headlines, from a lesbian motorcyclist to an Aishwarya-inspired drag queen, from a closeted CEO to a writer who stages her own murder-mystery. Out! Stories from the New Queer India offers a glimpse beyond the closet doors — and into the lives and dreams of India’s most misunderstood minority. The book has been published by Queer Ink and edited by Minal Hajratwala, the author of the multiple award winning book Leaving India: My Family’s Journey From Five Villages to Five Continents (2009). In this special event Minal was in conversation with Parmesh Shahani, head of the Godrej India Culture Lab, talking about her book and her experiences while she was editing it.