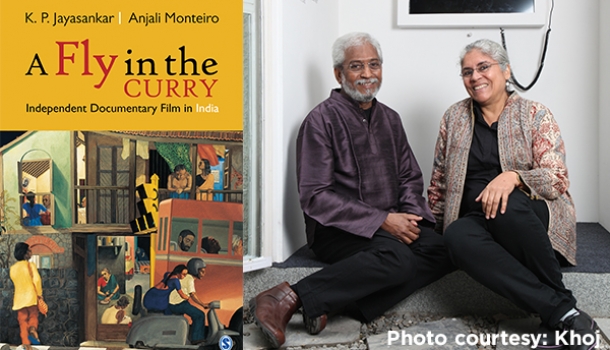 A Fly in the Curry: Independent Documentary Film in India

The Godrej India Culture Lab is proud to present Dr. K.P. Jayasankar and Dr. Anjali Monteiro for a special talk on their award winning book A Fly in the Curry: Independent Documentary Film in India. Based on close textual analysis and conversations with filmmakers, the book explores independent documentary film in India as a site of resistance.

The book looks at how independent Indian documentary film reworks the relationship between filmmakers, their narratives, their subjects and their audience, challenging the dominant idea of documentary as a discourse of the real.

The book has received a Special Mention in the best book on cinema category, President’s National Film Awards, 2017.

Illustrated with clips, the professors’ presentation at our Lab will briefly explore the space of independent documentaries from the 1970s, focusing on films that have questioned social relations of power. It will also look at the resistance to censorship, which is the hallmark of the independent documentary movement.

Following the talk, the professors will be in conversation with Abhay Sardesai, Editor of ART India

About the Authors
Dr. K.P. Jayasankar and Dr. Anjali Monteiro are Professors at the School of Media and Cultural Studies, Tata Institute of Social Sciences, Mumbai, India. They are involved in documentary production, media teaching and research. They have made over 35 documentary films. Their films have been screened at film festivals all over the world and have won thirty-two awards.